September 8, 2019 in Historic and Market 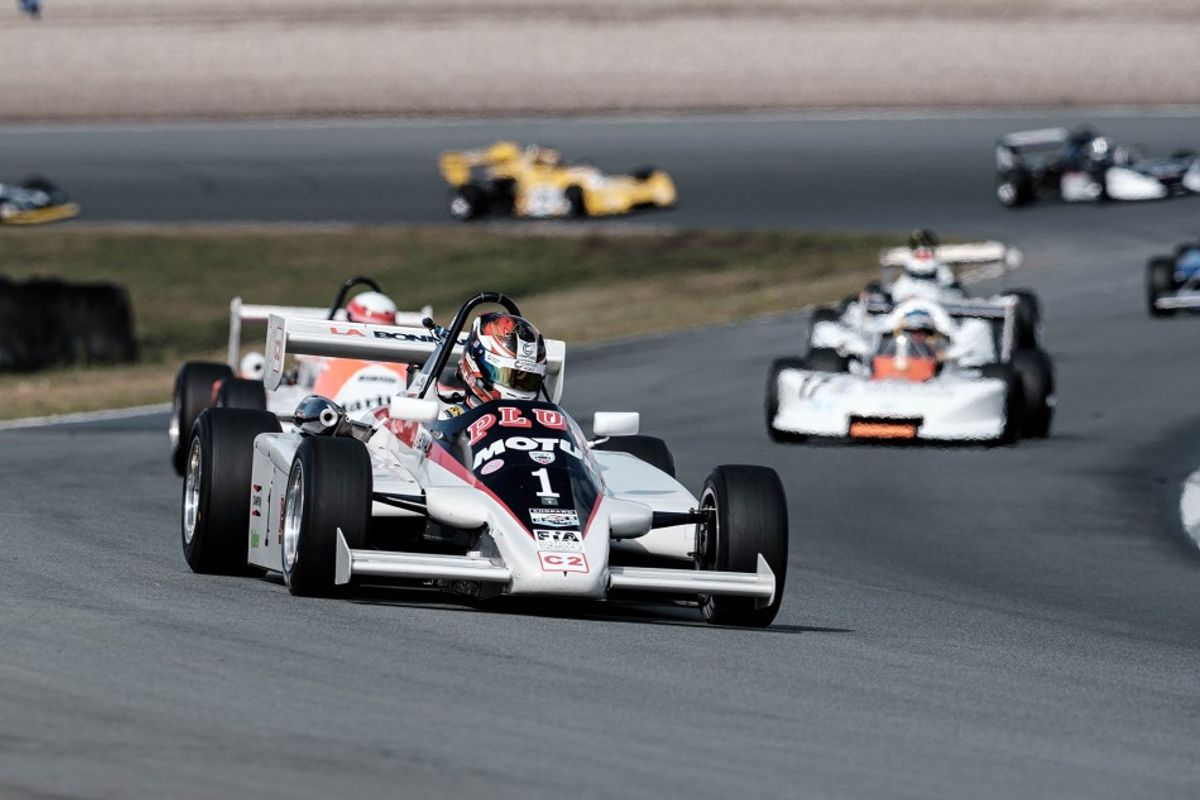 OLSEN AND LEONE TAKE TWO FROM TWO AT ZANDVOORT

Another heavy rain shower ahead of the second 25-minute race of the FIA Historic Formula 3 European Cup at Zandvoort gave the drivers a tyre choice dilemma on whether to use slicks or wets.  With broken clouds on the horizon approaching fast it was a difficult choice and one that would ultimately decide the destination of the 2019 titles.

After several withdrawn cars following yesterday’s race, a fantastic array of nineteen cars lined up on the grid for the race.

Race 1 winner Christian Olsen started from pole position on slicks on his no1 Martini MK39, while fellow Dane Michael Ringstrom started on wets from second on the grid in his no11 Martini MK42.  At the start Ringstrom used the extra grip to put the leader under pressure, with the no11 Martini moving into the lead on the run into Hans Ernst Bocht as Olsen’s car slid around under braking.

Class 1 winner Valerio Leone, who also started on wets, moved up to 4thplace as Frederic Rouvier’s no59 Martini MK34 also struggled for grip on slick tyres.  Leone was ahead of Rob Moores’ no8 Chevron B38, the no22 March of Gianluigi Candiani and Keith White’s no5 Ralt RT1, who were all battle for the final class podium positions.

As the track dried out Ringstrom was searching out the wet patches on the Zandvoort track surface to cool his overheating wets.  Olsen’s slicks had started to work and was soon back on terms with the no11 Martini MK42. On lap 6 the two cars were side by side, with Ringstrom trying every trick in the book to defend his position. Olsen got his opportunity, diving down the inside at Hans Ernst Bocht, and then the no1 Martini pulled away.

The no16 March 783 of Valerio Leone was up to third overall and well ahead in the Class 1 battle, but the Italian was starting to struggle for grip on his deteriorating wets as the Class 2 no31 Ralt RT3 of Thomas Weidel and the no59 Martini MK34 of Frederic Rouvier started to move up the order.

Leone decided to let the battle class 2 competitors go ahead as he made sure he stayed ahead of his rivals further back.

Rouvier and Weidel swapped places a couple of times, with Rouvier taking the third place ahead of the German.  The French driver then set off to try and snatch 2ndfrom Michael Ringstrom and on the last lap he sailed past the Dane to take second.

At the chequered flag Christian Olsen took the victory, thirty two seconds ahead of Frederic Rouvier, with Michael Ringstrom a further four seconds behind. However Michael Ringstrom was given a 10 second penalty for a technical infringement discovered in post race scrutineering.  This promoted Thomas Weidel into third place, with Ringtrom classified fourth.

Valerio Leone finished 5thoverall to secure his second Class 1 victory of the weekend, 32 seconds ahead of Keith White’s Ralt RT1 in 7thoverall, with the no22 March 783 of Gianluigi Candiani taking the final class podium slot after Rob Moores’ Chevron retired on the penultimate lap.

After the podium Christian Olsen said: “It was the right choice of tyres once again. It was difficult coming into it because with the weather and there wasn’t as much wind as yesterday. But I could see that the blue sky was coming from behind the clouds and I have done enough running on slicks in the wet, especially last weekend in the ELMS at Silverstone, that it is about managing the temperature and just waiting to find the dry line.  I love it!

“To take four wins from four races at this event is great and I love these cars.  I will keep doing historic racing as long as I can.”

Valerio Leone said after the race: “Unfortunately I was on rain tyres at the start, which were very good at the beginning but towards mid race the car started to go everywhere, so I was looking for the wet surface.  I was third overall but I started to think about my group, so I slowed down very much for the class win.  I knew I had a gap so I could slow down, find the wet surface and try to get to the end of the race.

“Fortunately, everything went very well this year for me, but not my son. But I am really happy about these two wins at Zandvoort.”

OLSEN GETS TITLE DEFENCE OFF

Reigning Historic Formula 3 European Cup Champion Christian Olsen won the first of the two 25-minute races at Zandvoort with a dominant display to finish over 14 seconds ahead of the rest of the field from pole position. The Class 1 victory was secured by Valerio Leone, the Italian fighting his way back up the field after starting the race in the pitlane.  His son Davide looked on course to win the class but the engine in the back of his March 783 let go two laps from the chequered flag while lying in third overall.

After earlier heavy rain the track was dry with damp patches in places, so some teams elected for wets and some for slicks.  The race restarted behind the safety car after there was some confusion amongst the drivers when the start procedures weren’t followed.  The allowed drivers on wets to switch them for slicks and start from the pitlane.

When the Safety Car came in Christian Olsen pulled ahead from pole position in the no1 Martini MK39-Toyota with fellow Dane Michael Ringstrom in the no11 Martini MK42-Alfa Romeo in his wheel tracks.  The Class 1 no17 March 783-Toyota of Davide Leone was third ahead of the no15 Martini MK34-Toyota of Manfredo Rossi Di Montelera.

The no59 Martini MK34-Toyota of Frederic Rouvier had started at the back of the grid after a technical issue found in post qualifying checks and the French driver was on a charge up the field.  By lap 4 Rouvier was up to 8thand was closing in on David Thorburn’s Ralt RT3-Toyota and then set off to close the gap to the no46 March 793 of Marcel Biehl.

Meanwhile back at the front of the field Ringstrom was keeping Olsen in his sights, but on lap 6 he suddenly dropped ten seconds when he missed a gear change.  The Dane was well ahead of the no17 March in third and was able to maintain his second place.  But Olsen was pulling away by nearly one second a lap.

Davide Leone in the no17 March looked on course for the Class 1 win and an overall podium finish when his Toyota engine let go in a cloud of smoke.  This promoted the no31 Ralt RT3 of Thomas Weidel into third overall. The Class 1 lead reverted to Valerio Leone, the Italian having already passed both the no22 March 783 of Gianluigi Candini and the no8 Chevron B38 of Rob Moores for 7thoverall.

The chequered flag came out to end the first of the two races, with Christian Olsen slowing to take the applause from the team on the pitwall.  Olsen was classified 14.1 seconds ahead of the no11 Martini MK42 of Michael Ringstrom and 26.3 seconds ahead of third placed Thomas Weidel in the no31 Ralt RT3.

Christian Olsen said: “I got a good start and I don’t even know what happened to the guy behind me, it was straight sailing really.

“The car was OK but it was really difficult to get the tyre pressures right.  It was a huge gamble at the start of the race because nobody knew what to do with regards to wets or drys, but I think slicks was the right way to go.

“I was struggling a bit with understeer; the front end of the car wouldn’t really bite, but I am guessing it also because we couldn’t get the tyre temperatures going.  We just need to do a repeat in tomorrow’s race.”

Valerio Leone said: “I chose the wrong tyres at the start of the race because I thought it was wet. However, on the warm up lap I saw it was completely dry. Fortunately, there was the red flag so I had the time to change the tyres but I had to start in the pitlane in last position.

“Davide chose the good tyres, he chose slicks. Unfortunately, he broke the engine two laps from the end.   Last year’s race was really bad, I had extremely bad luck, so this win is good. There is still one race tomorrow, which I hope is as good as today.”