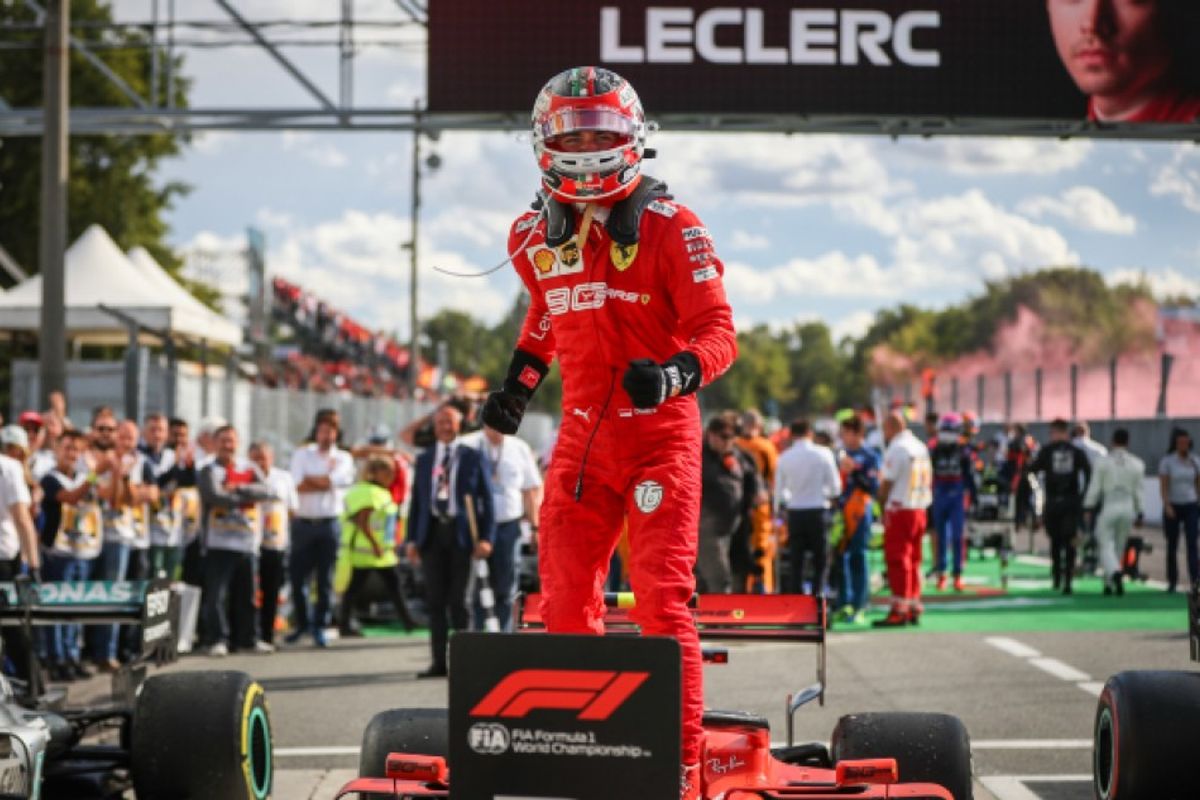 Charles Leclerc and Scuderia Ferrari took their second win of the season today in the Italian Grand Prix at Monza, in front of thousands of deliriously happy fans. Second and third were Valtteri Bottas and Lewis Hamilton. It was a very difficult race for Sebastian Vettel, who spun at the Variante Ascari on lap 6 after which he fought back to finish 13th.This was Charles’ second win in eight days and it is the 237th for Scuderia Ferrari, its 19th at Monza.

Charles Leclerc took his second F1 win in a row and handed Ferrari its first home win in nine years after edging a titanic race-long battle with Lewis Hamilton and resisting pressure from the Briton’s Mercedes team-mate in the final laps.

At the start pole sitter Leclerc held his advantage and took the lead ahead of Hamilton and Bottas. Behind them Sebastian Vettel in the second Ferrari lost out to Renault’s Nico Hulkenberg early in the lap and dropped from his starting position of fourth to fifth place.

Vettel fought back, however, and at the start of the next lap he retook fourth with a move past Hulkenberg into Turn 1. His hold on the position didn’t last long, however. On lap five the German carried too much speed into Ascari and lost control. The Ferrari driver spun in mid-corner and slid off track.

He quickly rejoined but in doing so he forced the onrushing Lance Stroll to also spin. The Racing Point driver then mirrored Vettel’s unsafe return to the track and the Canadian’s actions forced Toro Rosso’s Pierre Gasly wide into the gravel.

The incidents resulted in Vettel behind handed a 10-second stop/go penalty, while Stroll received a drive through penalty. Both drivers made their way to pit lane to serve the sanctions and dropped to the rear of the field.

Hamilton was the first of the leading pack to pit, on lap 19. The Mercedes man opted for medium tyres and rejoined in fifth place. Ferrari covered, with Leclerc pitting on the next lap for hard tyres, a choice that would prove crucial later in the race.

Leclerc emerged ahead of Hamilton but the Mercedes driver quickly began to close the gap. Leclerc passed the slower Hulkenberg around the outside of Parabolica to regain third place and that allowed Hamilton attack into Turn 1 and into the second chicane. Leclerc defended hard, however, and Hamilton was forced to cut the chicane. The Ferrari driver’s defence earned him a black and white flag for unsportsmanlike conduct.

Hamilton once again began to put Leclerc under heavy pressure and on lap 36 the Monegasque driver made a mistake. He outbraked himself on the approach to Turn 1 and was forced to cut the first chicane. Hamilton tried to pounce into the second chicane and Leclerc again defended robustly to hold off the challenge.

With 15 laps remaining, Hamilton’s medium tyres began to go off and a mistake into Turn 1 allowed Bottas to sweep past into second place.

With his challenge over and a huge gap back to fourth-placed Daniel Ricciardo the championship leader opted to pit for new soft tyres and on lap 51 he posted the race fastest lap of 1:21.779 to grab a bonus point to add to his 15 for third place.

Ahead, Leclerc comfortably held off Bottas to take his second career win and a first victory for Ferrari on home soil since 2010.

Behind Hamilton Renault’s Daniel Ricciardo and Nico Hulkenberg were fourth and fifth respectively. Hulkenberg was closed down by Red Bull Racing’s Alex Albon in the closing stages with the Thai driver closing a 12-secomnd gap on lap 36 to just 1.1s by the flag. Sergio Pérez was seventh for Racing Point, with the Mexican resisting enormous pressure from Max Verstappen in the final laps as the Dutch finished in a strong P8 after starting from 19thon the grid. Behind Verstappen, the final points positions were taken by Alfa Romeo’s Antonio Giovinazzi and McLaren’s Lando Norris.