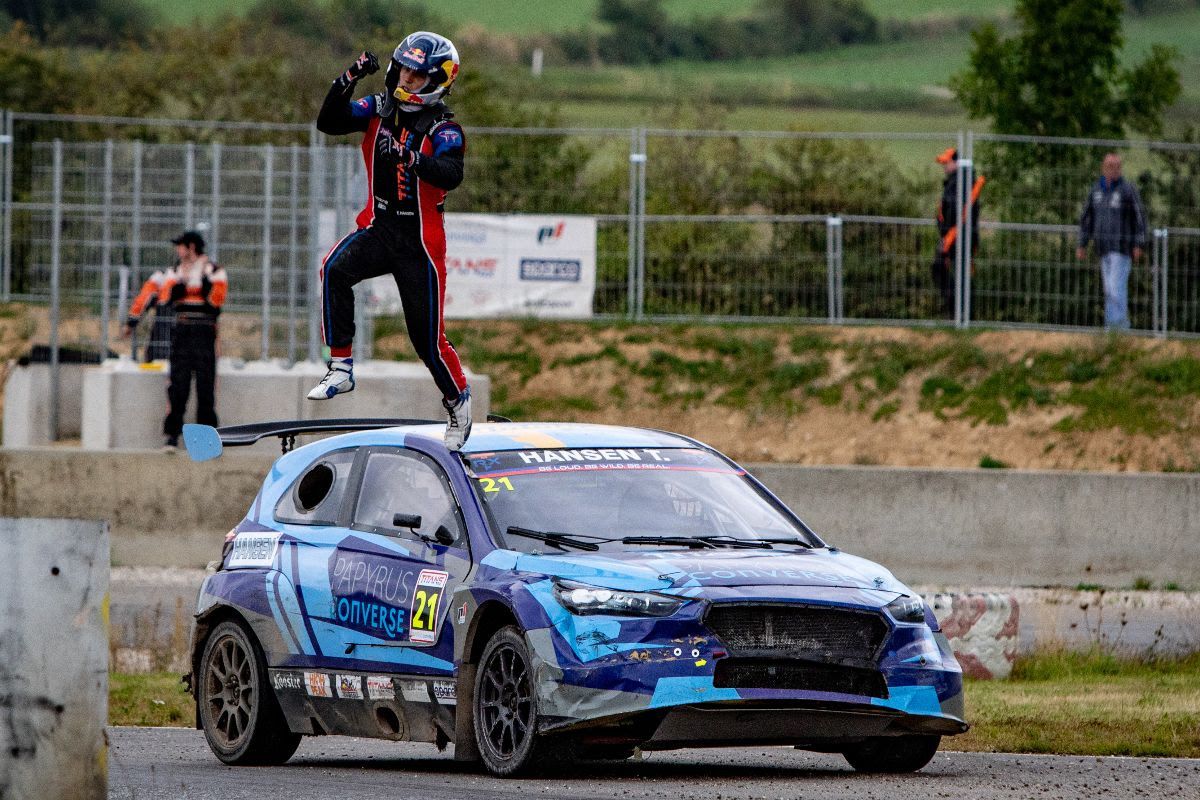 Topi Heikkien and Timmy Hansen won as TitansRX returned to its home venue, the MJP Arena in Austria.

It was Heikkinen who emerged on top on Saturday, dominating the day and taking a convincing final victory.

The Finn led from the start but faced a stiff challenge from Kevin Hansen, who made several attempts to get by for the race lead.

Hansen made a play for the race lead in the final couple of corners on the last lap of the seven lap race, making contact with Heikkinen more than once. He was unable to find a way past though, and finished just seven hundredths of a second back in what was the closest final finish in TitansRX so far.

The New Zealander, racing for the first time since the second round of the season in Essay, moved into the final podium position on the second lap of the race after making contact with Craig Breen, who dropped back as a result and finished 11.6 seconds behind his fellow rally driver.

Timmy Hansen was the last runner in the final finishing fifth. The Swede made a poor getaway at the start of the race and then was forced off track on the second lap of the race. He continued to battle with Breen for the remainder of the race, despite suffering with a left-front puncture as a result of the second lap incident.

Jerome Grosset-Janin was the remaining starter in the final, but pulled off track almost immediately at the start of the race.

On Sunday Timmy Hansen made the most of a qualifying retirement for an otherwise dominant Kevin Hansen to top the morning running, before going on to take a convincing third win of the season in the final.

The elder Hansen escaped a first corner coming together as the rest of the field concertinaed.

In the skirmish Kevin Hansen moved up to second, getting by round seven winner Topi Heikkinen, while Jerome Grosst-Janin also took advantage to move into podium contention. Craig Breen also had a look but couldn't find a way past over the first jump. The Frenchman, however, quickly fell back as the field went into the reprofiled dirt drift section beginning after the jump.

Behind the Timmy Hansen, who had a clear advantage, Timmy Hansen and Heikkinen were squabbling over second place. On lap two Heikkinen made a bold move up the inside of the sweeping dirt turn – a move that had become something of a trademark for the Finn over the weekend – and snatched second.

From there Heikkinen began to chase down Timmy Hansen, but the race leader's younger brother remained hot on his tail.

Although Heikkinen had closed the gap up to just under 1.9 seconds by the race end he couldn't find his way to the front to become the first driver to sweep a weekend. It was a similar story for Kevin Hansen who like Heikkinen, had his day compromised by a tricky run in qualifying.

TitansRX’s return to Austria, its first event in the country since the series’ pre-season test event, also marked the first full-scale event for the newly reconfigured MJP Arena.

“We really managed to create a track that fits the purpose of this series perfectly,” said TitansRX founder and CEO, and MJP Arena owner Max Pucher. “Both the first corner and the long drift section that we have afterwards were just the show of the weekend, it was amazing.”

“I’m really happy to find that everything we had planned worked out the way that we wanted,” Pucher added. “For Austrian relationships this was an excellent crowd. Unfortunately Austria doesn’t have a huge amount of spectators for rallycross at the moment but this was as good as it gets.”

Although he failed to win a main event all weekend, Kevin Hansen once again ends an event atop of the points standings, holding a slender five-point lead over Heikkinen. Timmy Hansen's win keeps him very much in the title fight; he sits third, 11 points adrift of the top spot.

Another strong weekend for Molinaro means that she moves up to fourth in the points, holding the 'best of the rest' spot, two points ahead of Grosset-Janin.