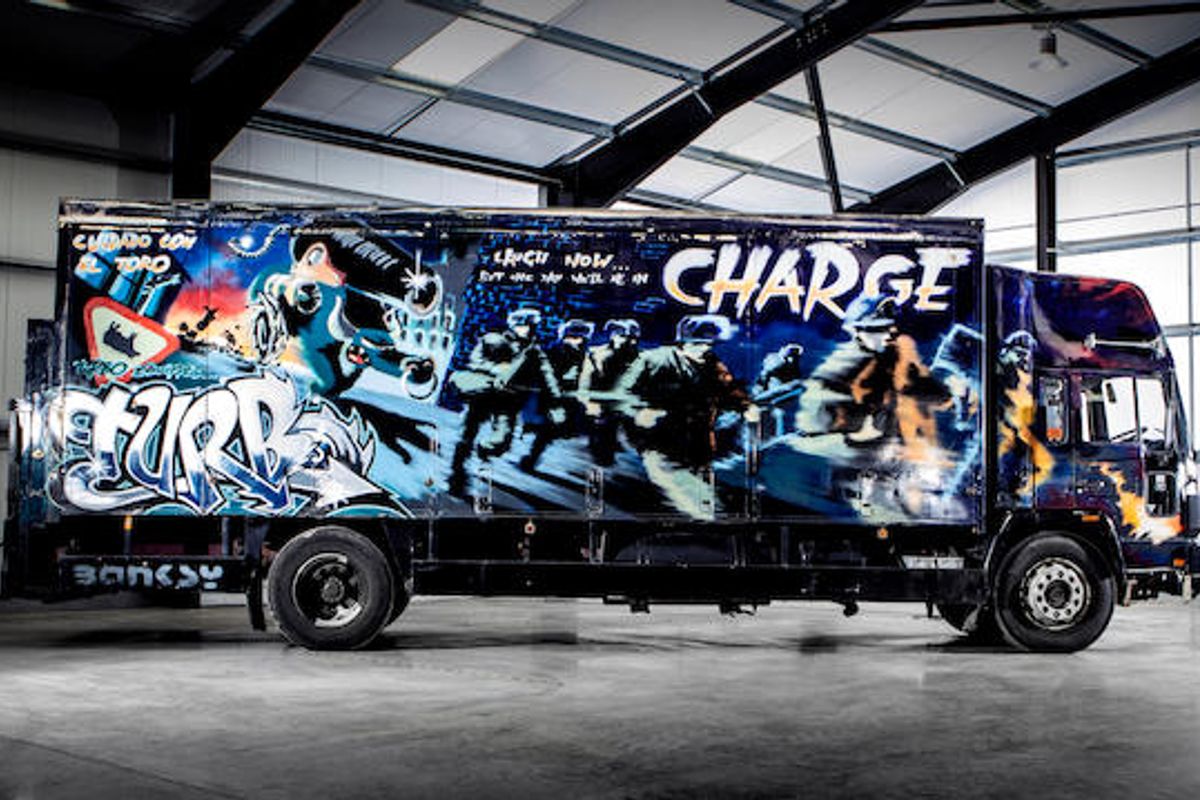 Provenance
Acquired directly from the artist in 2000

An imposing, statement piece by one of the most celebrated artists of the contemporary period, Turbo Zone Truck (Laugh Now But One Day We'll Be in Charge) (2000) is a truly unprecedented work of art from Banksy's formative years, illustrating an array of iconic motifs and apothegms that have become the artist's signature and calling-card.

Composed at the turn of the millennia, the uniquely hand-painted 17-ton truck is a mobile testament to Banksy's longstanding, breakthrough vandalism of art's old-hat approach to painting on canvas and paintings in galleries. Taking the vehicle of the laborer, the workman and the blue-collar employee as his blank canvas, the present motorcar and work of art revels in Banksy's raw and unfiltered wit; a masterclass of the artist's satirical humour and impressive dexterity with spray-paint.

Written into the art history books, alongside the likes of Jean-Michel Basquiat, Keith Haring, Richard Hambleton and Shepard Fairey, Banksy belongs to a rarified group of artist-outcasts whose inimitable styles took seed in their early years as rogue street artists; styles and stories that were hotly embraced by the New York and London contemporary art scenes. A distinct, cool, disarming wit and charm, Banksy's anti-establishment panache earned him a cult following from the earliest stages of his career, a period from which the present work derives.

Awash with images of anarchy and unruly subjects, Turbo Zone Truck (Laugh Now But One Day We'll Be in Charge) wonderfully illustrates a variety of Banksy's most prominent and sought-after characters, from the winged monkeys and SWAT teams, to the short lyrics that decorate the lorry's side. Icons that have appeared in many iterations throughout Banksy's career – on buildings, canvases and editions – the present Volvo FL6 features what are believed to be some of the first emergences of these images and words that are so characteristic of his practice.
In a field dominated by tags and trademarks, the symbols of Banksy's practice are fundamental to his formal vocabulary, making this, the earliest iteration of some of these central themes, a truly significant motorcar and work of art.

Invited to southern Spain in 1999, Banksy was propositioned to paint the Volvo lorry in anticipation of a warehouse party that had been planned for the New Year and millennium celebrations in 2000. After spraying the initial layers of paint on stage and under spotlights during the party, Banksy completed the truck over the next two weeks, detailing and rendering the artwork in a prototypical, free-hand style. In the subsequent years, the truck toured Europe and South America with Turbozone Circus, a company known for their pyrotechnics. An artist known for his in-situ works, often highly political in nature, choosing as dangerous and fractious sites as Israel's West Bank and towns under siege in the northern Gaza Strip, the artwork – which is denominated as such under the conditions of it being in running order as a vehicle – is wholly unique in it's mobility and the amount of exposure it has seen since its fabrication after being driven in locations around the world.

Many of the greatest artists of the last five decades have taken to vehicles as their canvas, including Keith Haring, Sterling Ruby, Alexander Calder, Richard Prince and Andy Warhol; perhaps most famously as part of the BMW Art Car series. Hugely rare and highly sought-after, such objects eclipse the studio practices of these artists, and often preempt new and momentous passages in the course of their work. Banksy's Turbo Zone Truck (Laugh Now But One Day We'll Be in Charge) stands as a foundational work of art by one of the 21st Centuries most acclaimed, prized artists and social commentators.

Synthesizing street art and motoring, contemporary art and graffiti, an object of labour and the paint of an aesthete, this Banksy-painted Volvo FL6 is an extraordinary object that represents an opportunity to attain both a prodigious work of art and a noteworthy vehicle with an incredible story.
Saleroom notices