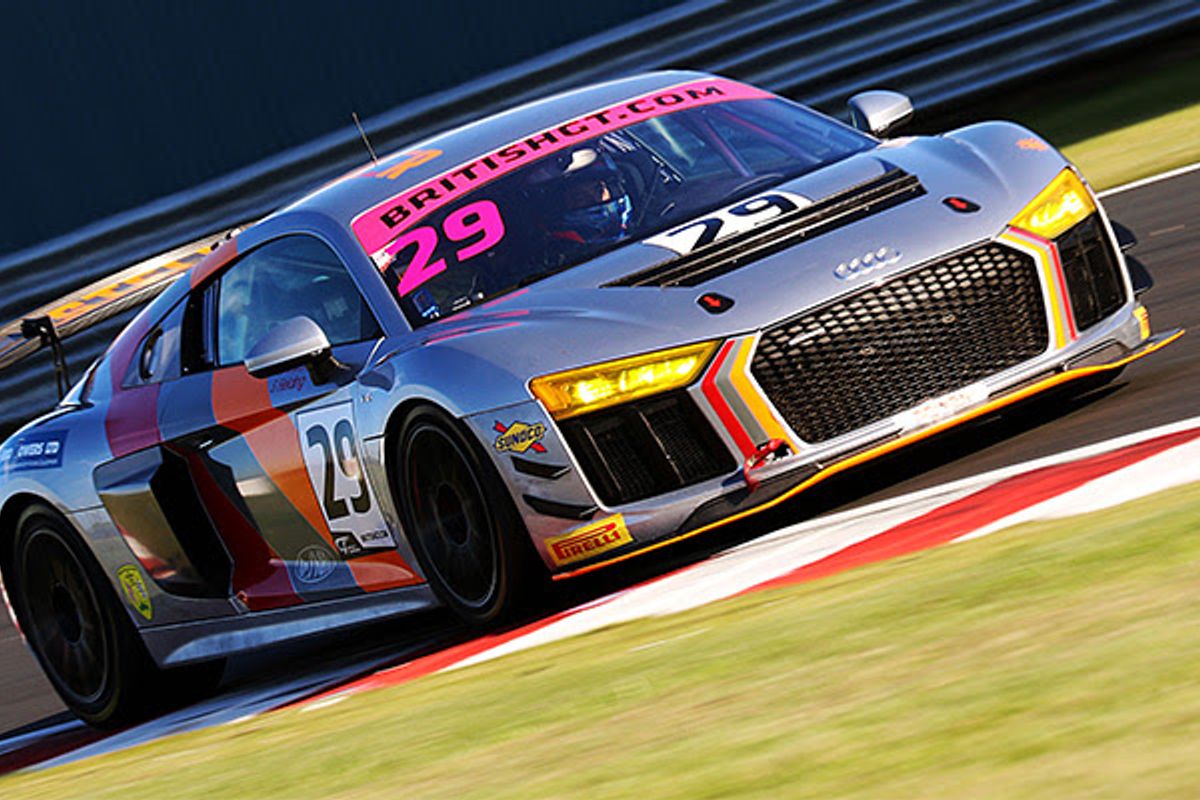 The sun shone on Shaun Balfe and Rob Bell who set the fastest and second fastest times in their respective sessions to secure pole by a combined 0.6s from championship leaders Adam Balon and Phil Keen, while Callum Macleod’s late effort secured third for RAM Racing’s Mercedes-AMG.

Behind, Steller will share the front row with GT4 points’ leaders Ash Hand and Tom Canning who both finished second in their respective sessions. The latter’s final flying lap displaced HHC’s McLaren shared by title protagonists Callum Pointon and Dean Macdonald who set his third individual fastest time in as many outings.

GT3: BALFE OUT FRONT, BUT CHAMPIONSHIP LEADERS START ALONGSIDE

Shaun Balfe and Rob Bell must win today to have any chance of snatching the GT3 Drivers’ title. And the Balfe Motorsport duo put their McLaren in prime position to do just that by maintaining their excellent late-season form in qualifying.

Balfe began by setting the Q1 pace from Angus Fender’s Century BMW and Ian Loggie’s RAM Racing Mercedes-AMG, while the best of the other title contenders – Graham Davidson and Adam Balon – slotted into fifth and sixth behind Dominic Paul who ensured both M6s finished inside the initial top-six.

Bell therefore headed into the second 10-minute session with a 0.2s head-start, which he increased to 0.6s by producing the second fastest time overall. The quickest belonged to Phil Keen whose 1m26.667s lowered GT3’s qualifying record and helped Barwell’s championship-leading Lamborghini jump from sixth to second.

Callum Macleod maintained RAM’s third place while TF Sport’s #47 Aston Martin – which starts six points behind Keen and Balon – lines up fourth. Incredibly, the combined time of Davidson and Jonny Adam was identical to that of Fender and Jack Mitchell, whose Century BMW was classified fifth as a result of setting its cumulative time after TF Sport.

Century’s second BMW also starts on row three, one place ahead of Barwell’s other championship contenders, Sam De Haan and Jonny Cocker, who have work to do from seventh. However, their task is a great deal easier than the one facing Ollie Wilkinson and Bradley Ellis (Optimum Motorsport) who must win from 12th to have any chance of featuring in the title shake-up.

Behind, Callum Pointon put HHC’s McLaren in the mix by initially qualifying fourth ahead of Andrew Gordon-Colebrooke (Century BMW) and another of 2019’s six overall championship contenders, Jordan Collard.

Of course, the grid wouldn’t be settled until the second 10-minute session. And, for a while, it looked like Steller would be denied.

First, Tom Canning bridged TF Sport’s small deficit to jump up to first before another individual best qualifying lap from Dean Macdonald – his third in a row – saw HHC’s McLaren provisionally topping the times. Fielding needed to improve, which he did late on to stretch Steller’s advantage to over four tenths. That ultimately became 0.376s when a late, late effort from Canning moved the championship leader back ahead of Macdonald.

Josh Price ensured both TF Sport Aston Martins featured in the final top-four, while Seb Priaulx moved Multimatic’s Mustang from seventh to fifth. This year’s top-three championship contenders therefore start second, third and fifth, respectively, although the latter will race without the handicap of a Pitstop Success Penalty.

The starting drivers’ minimum stint time remains the same as Brands Hatch: GT4 entries cannot pit until the 58th minute while GT3s must run until the 62nd. There is no pit window.