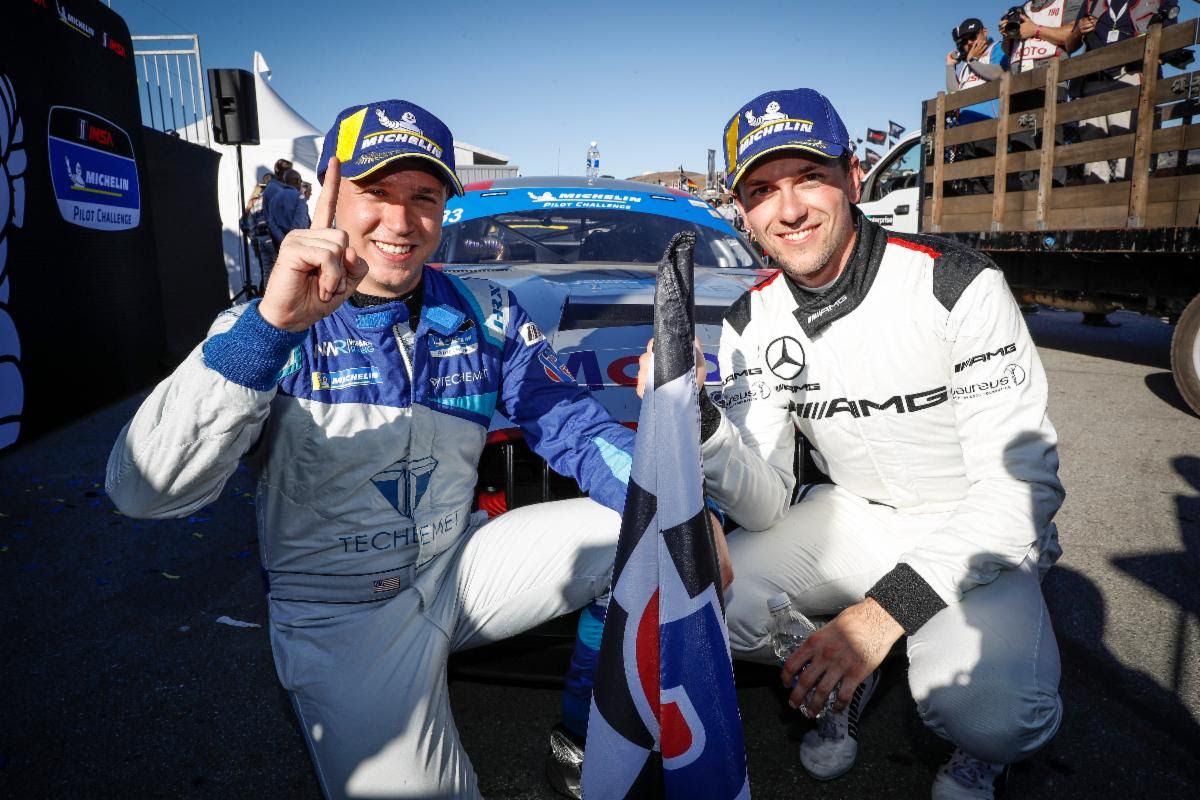 Winward Racing is now a winning team in the IMSA Michelin Pilot Challenge.

The elusive victory had escaped the No. 33 Mercedes-AMG GT4 team for three years, first joining the series in 2017 and the following year, announcing a partnership with the German Mercedes-AMG squad of HTP Motorsport that stands to this day.

Russell Ward – who has been with the program since its inception alongside team owner and father Bryce – was part of the winning lineup on Saturday afternoon at WeatherTech Raceway Laguna Seca. He stood with the team and cheered on as co-driver Dominik Baumann crossed the finish line first.

“It means an incredible amount to the team,” said Ward. “Everyone works so hard, and we bleed this together. To finally bring it home for the team feels incredible, especially after the season we’ve had. It’s just been a difficult season. We’ve had some crashes, some mechanical failures, just about everything in the book has been thrown at us.”

For the majority of the race, Winward’s toughest opponent appeared to be the No. 39 Carbahn with Peregrine Racing Audi R8 GT4 of Tyler McQuarrie and Jeff Westphal. McQuarrie qualified the car on pole and handed the car over to Westphal in that position.

Westphal brought the car into the pits before Baumann for his final stop. However, Baumann was able to make up enough ground on track before he entered the pits for a rear-tire change that allowed him to come out ahead in the end.

From there, he hunted down the handful of race cars looking to stretch their fuel tanks to the finish. He ultimately passed the No. 7 Park Place Motorsports Porsche 718 Cayman GT4 Clubsport of Trent Hindman for the lead with eight minutes remaining in the two-hour race.

“We gained so much time on track, we were leading from after the pit stop,” said Baumann, who got the call to compete this weekend in his first Pilot Challenge race just a week ago. “The car was just great. I could defend the Audi at the end and pull a gap. It looked easy, but it wasn’t.

“We were setting up the car for race pace, not for one lap, and it helped us to have a good car in the race. Especially the last 15 to 20 minutes, we were strong. We made the right decisions, and it paid off in the end.”

McQuarrie and Westphal expanded their championship lead with a runner-up finish, nearly clinching the title with a 34-point lead, 262-228 over the No. 69 Motorsports In Action McLaren GT4 of Jesse Lazare and Corey Fergus with one race remaining.

Hindman and co-driver Alan Brynjolfsson held on for a third-place finish, moving up one spot to third in the championship standings with 218 points.

Returning this weekend to Monterey, Calif., the No. 61 Roadshagger Audi RS3 LMS brought a string of four podium finishes in six races and a painstakingly near-win in its first full season. That victory finally came Saturday afternoon in an impressive 12th-to-first performance without a pit stop in the final 50 minutes of the two-hour race.

“The team did an incredible job, as they have the last five races, jumping us up during the pit stop,” said Morley, a San Francisco resident. “They got me out in third place, and then I managed to get to the lead pretty quick, pull out a bit of a gap, and then from there, it was just managing tires. We weren’t planning on running the whole way, but the way the race went, that’s what happened.”

The win ends a trying few weeks for Roadshagger, which was involved in a late-race incident from the lead at VIRginia International Raceway three weeks ago that wiped out a potential victory. The following Monday, Ernstone and Morley learned their partnering team, eEuroparts, was immediately withdrawing from the sport.

“As luck would have it, I own all the stuff that is in our team,” said Ernstone. “I own the car, the hauler, all the tools and everything else, and eEuroparts was running it for me. We just got a driver and a tractor unit straight over to Connecticut, got everything in there and brought it to (my shop in) Vegas.

“That car was finished three minutes into the beginning of the promoter test on Thursday. We thought we were going to be working on it and adjusting it through the promoter test, but it was perfect the whole test. That gave us the ability to work on strategy and everything else for this weekend. It’s been great. It couldn’t be better.”

With the victory, Ernstone and Morley moved into third place in the Pilot Challenge TCR standings, 14 points behind the leading No. 98 Bryan Herta Autosport Hyundai Veloster N TCR pair of Michael Lewis and Mark Wilkins, 256-242.

Lewis and Wilkins finished second on Saturday by a narrow 0.276 seconds after starting from the pole position. They hold an 11-point margin over their next closest competitors in the title hunt, Tom O’Gorman and Shelby Blackstock of the No. 37 L.A. Honda World Racing Honda Civic TCR, who finished third Saturday.

The NBCSN broadcast of the WeatherTech Raceway Laguna Seca 120 will air on Wednesday, Sept. 18 at 1 p.m. ET.