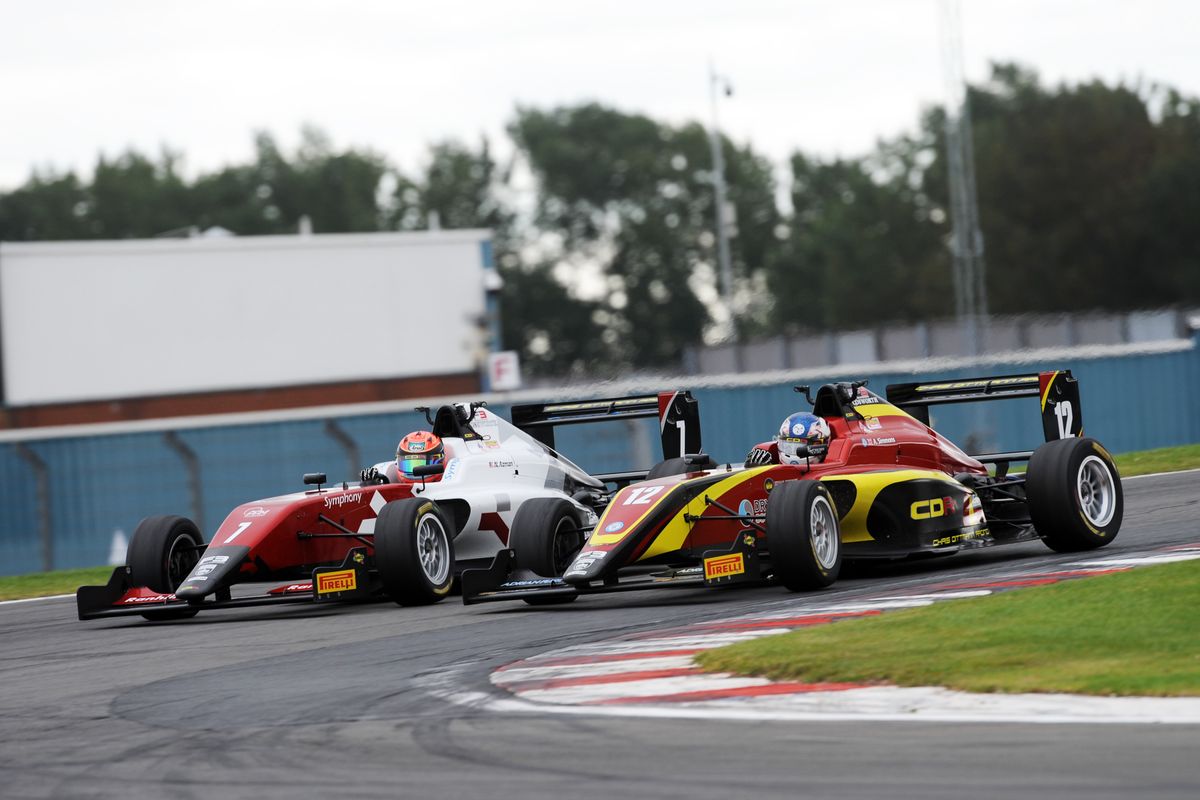 Nazim Azman and Johnathan Hoggard were the race winners on the final day of the BRDC British F3 season, but Carlin's Clement Novalak was crowned champion Sunday morning, after a dramatic reverse grid encounter.

Novalak has led the championship since the very first race of the season, and a total of two victories, six additional podiums and 23 top-10 finishes out of 24 races ensured he claimed the title by 23 points from Hoggard.

Hoggard claimed second in the championship, but picked up the Jack Cavill Pole Position Cup for the driver with most pole positions, but also won the Sunoco Whelen Challenge, and the fabulous prize drive at the Rolex 24 at Daytona in January.

Ayrton Simmons claimed third in the championship standings, after claiming a close second place in race two, and an eighth place in the final race of the year.

Race two
Novalak claimed the title in an extremely dramatic reverse grid contest Sunday morning. As Nazim Azman was taking the lead on the first lap, title challengers Novalak and Hoggard, starting 12th and 15th respectively, were literally going wheel to wheel. The pair locked together at Schwantz curve and bounced across the grass and to the tail of the field.

Both drivers continued, but Hoggard needed to finish ahead of Novalak in order to take the championship battle to the final race of the year. When he pitted to remove debris from his radiators, the championship was Novalak's.

At the front of the race, Azman held off a spirited charge from teammate Simmons to head Chris Dittmann Racing's second 1-2 finish of the year, with Neil Verhagen claiming third place.

Race three
Looking to make amends, Hoggard claimed his second win of the weekend from pole, and his fourth victory at Donington this year, taking his overall win tally for the season to seven. The triumph ensured Hoggard finished second in the championship, and also secured the Sunoco Whelen Challenge prize.

Hoggard scoops several prizes
Fortec's Hoggard claimed the vast majority of the end of season prizes. His overall tally of seven pole positions from the season saw him claim the £1,000 prize for the Jack Cavill Pole Position Cup, while also ensuring his team won the David Poole-Warren Pole Position Cup and another £1,000 prize.

Hoggard will also be jetting off to Florida in January after winning the Sunoco Whelen Challenge. The competition is run by series control fuel supplier the Anglo American Oil Company (European distributor of Sunoco fuels), and Whelen Engineering, and will see Hoggard compete in the world famous Rolex 24 at Daytona, following in the footsteps of last year's British F3 Champion Linus Lundqvist. The prize, worth $250,000, includes pre-event testing, flights, hotels, race suits and other expenses.

BRDC British F3 Champion Clement Novalak said: “It hasn’t settled in yet, I think I’ll probably realise it tomorrow morning when I wake up, but it’s been a great last couple of days. It has been very stressful, even though I came in with a big cushion in the points, for me it was still down to getting the results and doing everything I could to really stamp my authority on the championship early on, and try and have fun in the last couple of races. Obviously, we had that in the last race. But all in all, I’m really happy.”

Race two winner Azman said: "It was not so easy and a bit of deja vu compared to Brands Hatch. I just had to keep my cool and keep pushing. He [Simmons] got me twice into the hairpin but I then managed to get him on the undercut to stay ahead of him. It was a very, very hard race."

"It would have been nice winning the championship but Clement's done a good job all season. He's been so consistent and that's where he's got us really. Those mistakes have cost me a few valuable points, but I'm really happy, and I'm off to Florida too for the Rolex 24!"