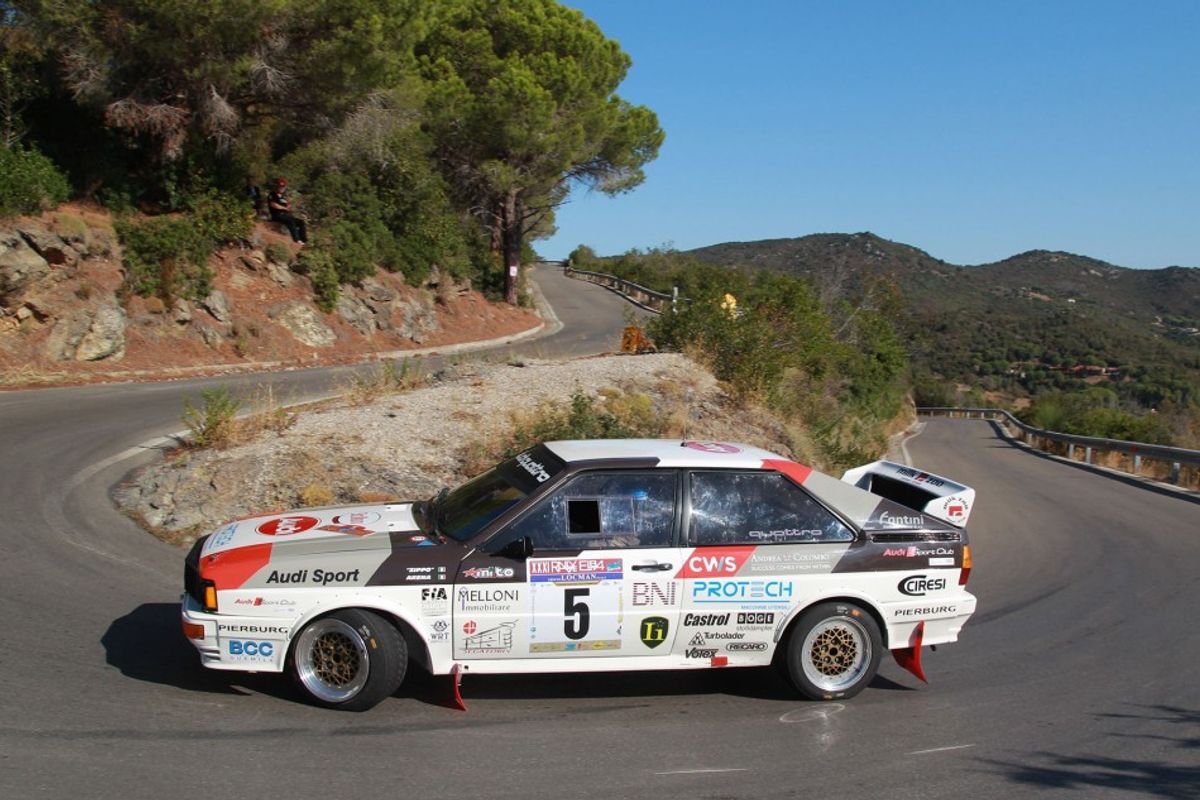 The first six stages have been completed on the XXXI Rally Elba Storico, Round 8 of the 2019 European Historic Sporting Rally Championship and Italian duo ‘Zippo’ and Nicola Arena are the leading EHSRC entry.  The Category 3 Audi Quattro completed the first six stages in 4th overall, and 1st in class, behind three local crews, 51.4 seconds behind the overall leader Alberto Salvini in the no4 Porsche 911 RS.

The first two special stages at Nisporto-Cavo and Capolivieri Innamorata were held in the dark on Thursday evening, with four more stages at Due Mari, Monumento, San Piero and Due Coli held on Friday.

The top EHSRC car at the end of the first two stages was the no2 Lancia Delta Integrale of ‘Lucky’ and Fabrizia Pons, the championship leaders finishing SS2 in second place overall just 15 seconds behind the no12 Lancia Delta Integrale of Francesco Bettini.  On the opening two stages of Friday, ‘Lucky’ went into the overall lead before a technical issue dropped the Lancia down the order to 10th overall on SS5.  At the end of Stage 6 the no2 Lancia was 2 minutes 40 seconds behind the overall leaders as the competitors stopped for the overnight halt.

The top Category 4 EHSRC car was the no7 Porsche 911 SC of Mats Mysell and Esko Juntilla, the Swedes lying 7th overall and 38 seconds ahead of ‘Lucky’ and Fabrizia Pons.  The no28 BMW M3 of Will Graham and Michael Johnston was third in the Category 4 standings in 11th overall, 1m10s behind the no2 Lancia.

The Category 3 battle was headed by ‘Zippo’ and Nicola Arena in the no5 Audi Quattro, well ahead of their nearest EHSRC class challenger, the no23 Porsche 911 SC of Pentti Veikkanen and Timo Jaakkola, the Finns lying in 19th overall and 4 minutes 23 seconds behind the Audi.

Third in the EHSRC Category 3 standings after SS6 is the no29 Toyota Starlet of the Lahti Historic Rally overall winners Esa Peltonen and Jyrki Saarto.  The Finns lying in 31st overall and over six minutes behind the Audi.

Anders and Ingrid Johnsen were at the head of the EHSRC Category 2 standings in the no26 Porsche 911 RSR and 12th overall.  The Swedish couple are 26 seconds ahead of their nearest rivals Paolo Pasutti and Gionvanni Battista Campeis in the no14 Porsche 911 RS, with the Rally Alpi Orientali Category 2 winners Maurizio Pagella and Roberto Brea in third, a further 11 seconds behind.

Category 2 championship leader Carlo Mylle is lying 5th in class in the no43 Porsche Carrera RSR in 18thoverall, just one place behind the 4th place Category 2 car, the no21 Alfa Romeo GTam of Laszlo and Edit Mekler.  The Belgian driver is 1 minute 12 seconds behind Anders Johnsen, while the Hungarians are 59 seconds adrift with four stages remaining on the final day of the rally.

Category 1 championship leaders Antonio Parisi and Giuseppe D’Angelo are looking for their second home win after the Italians took the class win on the Rally Alpi Orientali Historic last month.  The no37 Porsche 911 S is lying 34th overall, 31 seconds ahead of their championship rivals, Ernie and Karen Graham in the no52 Ford Escort Twin Cam.  The British crew are in 38th overall.

The second leg of the Rally Elba Storico will consist of four special stages on Saturday 21st September starting with Volterraio Cavo – Barontini Petroli at 08h53.  This will be followed by Perone, Volterraio and concludes with Nisporto-Cavo at 13h48.  The ceremonial finish will take place in Piazza Matteotti in Capolivieri from 15h25.