The right side of the track at RS:X World Championships 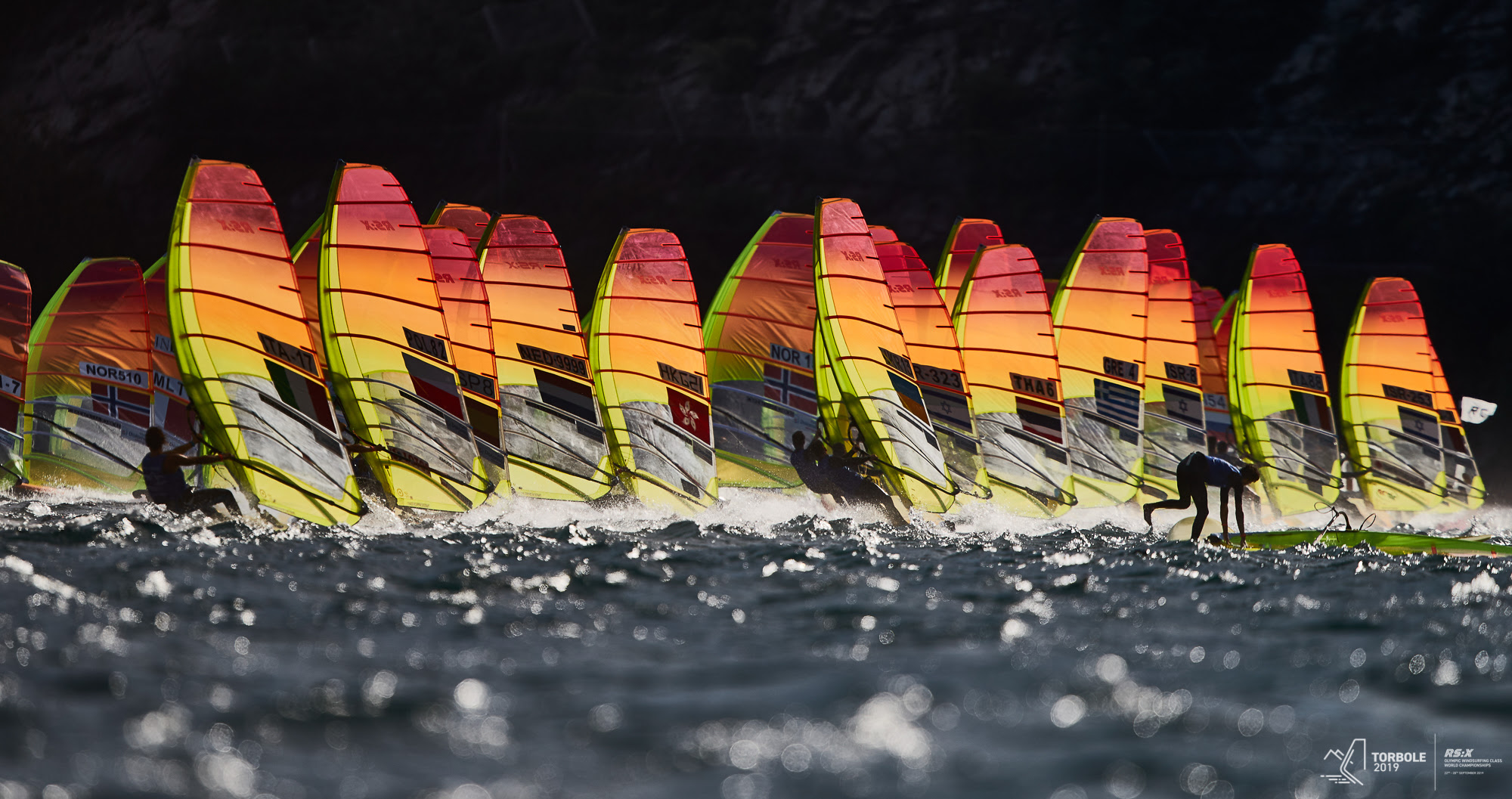 Day 2 of the 2019 RS:X World Championships being held in Torbole, Italy, saw the all important split of the fleets as the racing moved from qualifying series into the final series of racing. For many of the 236 competitors from 47 nations, today was going to be a day where dreams could be made or broken. The day to put your body on the line to make sure you ended up on the right side of the split, in the right fleet, on the right side of the track.

Why was this important? Because with 8 countries in the men’s fleet seeking Olympic qualification and 9 countries in the women’s fleet, today could be the day where you could secure your country a spot at the biggest party of the four year cycle – the 2020 Tokyo Olympic Games.

It was the turn of the women’s fleet to get out of bed early with an 0815 scheduled start this morning. However the forecast for the day was for unpredictable, unstable winds which led the race committee to be cautious in their planning for the racing. Two races for the women followed promptly by two races for the men, hoping to get these in whilst the northerly wind lasted.

The northerly breeze was in good form with a shifty 12-15 knots on the race course for full planning conditions. As you would expect from such a mountainous venue, as the wind started to drop it created big holes and big shifts, making for some very tactical racing in the big fleets where places could be won and lost in the blink of an eye. These four races were rattled off before the wind started to fade towards the end of the last men’s fleet race.

Then the waiting began. And the waiting carried on through lunch as Lake Garda looked flatter and flatter before the whispers of the southerly breeze came in. Within 30 minutes a solid ten knots had built and the race committee scrambled to the water to get the final women’s race and final men’s race in for the day. By the time the women had left the beach it was a solid 15knots with gusts of 18 knots – perfect windsurfing conditions to show the RS:X at maximum performance.

At the end of the qualifying series, it is reigning world champion Lilian De Geus from the Netherlands who had the best day scoring 2, 1, 7 and leads overall with 19 points overall. China’s Yunxiu Lu also had a solid day scoring 4, 3, 4 to move up into second place overall. Third place overall is held by overnight leader Marta Maggetti from Italy.

De Geus talked about the racing today, “It was a fun day with some really good conditions on the water. I was happy with my day and it was fun racing against the girls. I had some bad starts today and I need to get used to this big fleet racing and I have been trying to catch up most of the races. But its fun racing with so many girls.”

De Geus learnt to windsurf in Torbole with her family as a 12 year old, “I really like this place so I was looking forward to coming back here with lots of history. As I am sailing around I am thinking about all of the time I sailed here with my brothers and sisters so its really nice venue for me.”

Further down the fleet, the key number in the women’s fleet was 53. This is the position of the last female sailor that could get into gold fleet. That honour went to Megumi Komine of Japan, with New Zealander Veerle Ten Have agonisingly on the other side of the tracks in 54th place and in silver fleet. Ten Have however will be comforted that she is in pole position at the top of the silver fleet and in the best place to defend he claim to one of the two remaining qualification spots open for the women at this event.

Peruvian sailor Maria-Belen Bazo ended the day in 18th place overall and is provisionally qualified for Tokyo 2020 as there are seven nations in gold fleet, meaning that Bazo cannot lose her place. Bazo on todays performance, “It was a really long day, I woke up at 6.00am to race in the strong Peller wind before waiting around for another race in the strong Ora wind in the afternoon, I had good results so I am really happy. I will be the first Peruvian to go to the Olympics in windsurfing which will be amazing. My father is a surfer and in my club there was no surfing so I picked windsurfing as it was the most similar.”

The nations that have provisionally qualified for Tokyo 2020 are; Hong Kong, Brazil, Peru, Finland, Mexico, Hungry and Turkey.
For the men, it is Pierre le Coq from France who has retained the lead positon going into gold fleet scoring an impressive 1, 1, 2 from the day. Dutchman Kiran Badloe scored an improving 4, 2, 1 to sit comfortably in second place, just two points behind Le Coq. The battle for third place overall is led by Poland’s Piotr Myszka with Tom Squires (Great Britain), Kun Bi (China) and Byron Kokkalanis (Greece) all very close on overall points.

Le Coq on todays racing, “The racing was very exciting, we did two races with the north wind which was really hard and very tactical but I had a really good results winning both races. Then we had the typical south wind this afternoon where I came second so a very good day for me. Windsurfing in Torbole is paradise with perfect conditions and amazing scenery.”

Le Coq is one of a trio of Frenchmen who have won a number of different RS:X titles over the past couple of years with Thomas Goyard and Louis Giard pushing Le Coq for the place in Tokyo representing France.

Le Coq, “The qualification for us will be very hard and tough. This starts next year with the RS:X Worlds in Auckland and its good we can push each other lots.”

The Olympic qualification battles for the men are far from clear cut when compared to the women. There are 13 different nations in the gold fleet – but they are all after 8 qualification spots so the fight continues. The countries who could qualify are; Korea, Hong Kong, Switzerland, Belarus, Lithuania, Cyprus, United States, Russia, Hungary, Turkey, Czech Republic, Mexico and Malta.

Jouzas Bernotas from Lithuania is in 26th overall and is the fifth nation in order of ranking of countries looking to qualify. Bernotas on todays racing, “I really enjoyed it, it was windy which I like so it was a good couple of days for me. I will just keep trying my best each day and hope I can do good enough to qualify for Tokyo.”

With the fleets split into gold and silver, racing on Thursday and Friday will move into the finals series. The racing will be as intense but for certain sailors and countries, the next two days will have an extra edge of urgency to them. Towards the top, it will be the scramble to get into the medal race for Saturday. For others it will be about making sure they are high enough up the leader board to get their country and maybe themselves to Tokyo.

Racing for the men is scheduled from 0830 CET and for the women not before 1400 CET. Racing can be followed on live tracking which cane be accessed from the RS:X World Championship website.