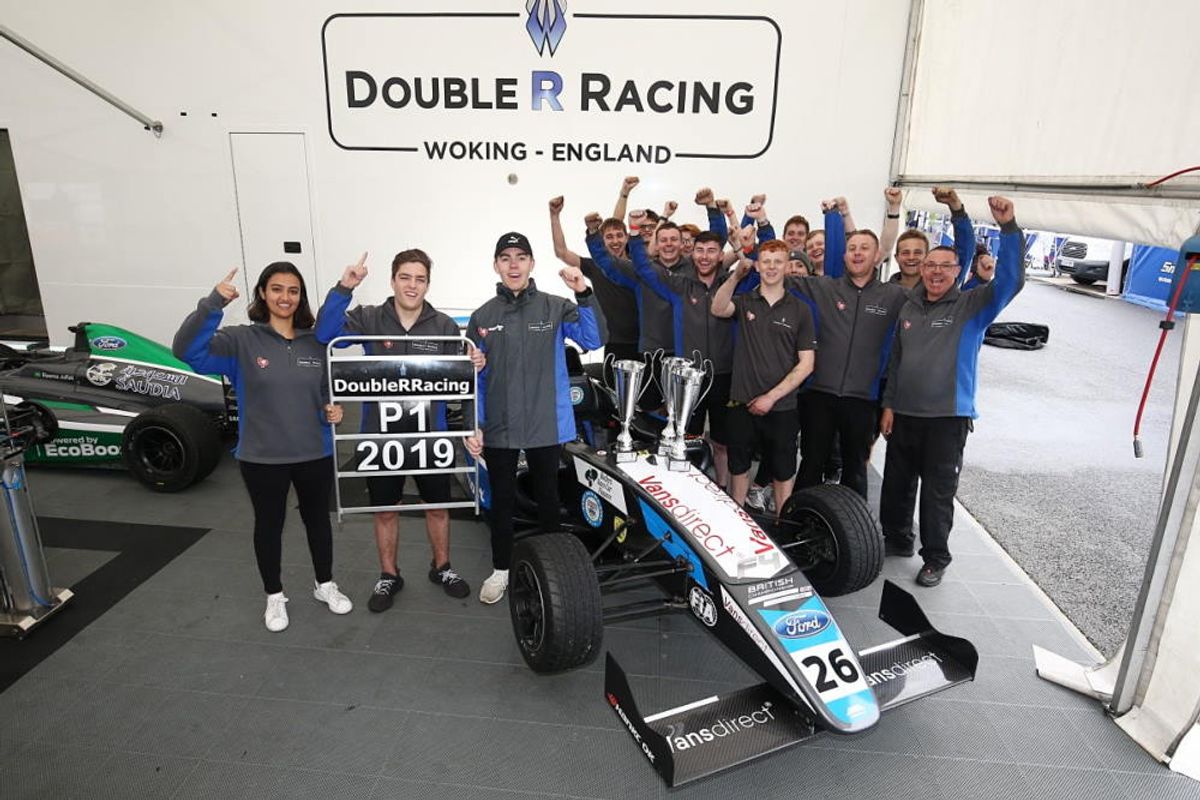 Double R Racing celebrated a perfect hat-trick of victories during the penultimate outing of the F4 British Championship certified by FIA powered by Ford Ecoboost season at a rain-hit Silverstone over the weekend, 28th/29th September – an event packed with high drama.

In-form British F4 rookie Louis Foster book-ended the visit to Northamptonshire with two stunning wins, after dominating pre-event practice and securing a brace of pole positions in qualifying. With the addition of a stunning recovery drive to third in race two of three, he has solidified third in the driver standings and closed to within 30 points of the championship lead.

Team-mate Sebastian Alvarez, who went into the weekend 15 points adrift of the top of the driver standings, finished runner-up to Foster in round 25 on Saturday afternoon to secure yet another one-two for Woking’s Double R.

The Mexican then raced to a fantastic wet-weather win in round 26 on Sunday to tie on points with championship leader Zane Maloney and set up a terrific third race. Dramatically, though, contact between the two rivals in a rain-hit round 27 led to retirement for both – so they go into the season finale at Brands Hatch in two weeks with nothing to separate them.

Saudi Arabia’s Reema Juffali made the eighth points visit of her maiden Formula 4 season in the third of the weekend’s encounters, ninth place in the Silverstone finale a richly deserved finish. in the two preceding contests she was 12th and 14th respectively.

“Fantastic weekend, absolutely outstanding to win all three races”, said delighted Double R team boss Anthony Hieatt, “It’s always very sweet to max out a weekend by winning every race. Louis has been the dominant performer across all sessions and he really did deserve his two wins, it could easily have been all three for him without contact in race two.

“It’s fantastic to go into the championship decider at Brands with Sebastian tied on points at the top of the table, he’s been super quick again and what happened in race three was just unfortunate and the sort of thing that can happen when two drivers are fighting tooth and nail. Congratulations to Reema for finishing in the points again in very tricky conditions, a great weekend all round.”

Double R racers Foster and Alvarez share the wins at home of British GP
Foster was the star performer during two days of pre-event testing on Thursday, 26th September, and Friday, 27th September, topping the times overall on both days. Quickest in all four sessions on the opening day with a best time of 56.097 seconds, on Friday the Double R driver produced a best time of 55.984 seconds in the dry first session before lapping third in the wet in session two.

Continuing his sensational form into Saturday, Foster produced a lap of 56.253 seconds (104.98mph) in qualifying to claim pole position for race one of the weekend. Alvarez, who was also rapid in testing with the second fastest time overall on Thursday and third on Friday, qualified fourth with Juffali 13th quickest and just 0.7 seconds shy of pole.

At the start of round 25 Foster launched well and maintained the lead through the sweeping right-hander at Copse. Never headed, or challenged, the Double R driver led by 0.7 seconds at the end of lap one and was almost four seconds to the good at the conclusion of lap 14.

During the latter stages Alvarez, who smartly sliced through from fourth to second on the opening lap, closed on his team-mate but Foster had enough in hand to win by 1.3 seconds at the end of lap 22 and he also posted the fastest lap of the race. Very importantly, an excellent second place for Alvarez meant the Mexican closed to within just seven points of championship leader Maloney.

Gaining two places on lap one, Juffali was then edged to 14th by lap three before gradually moving back up the order. Into 13th place on lap 10 when Tommy Foster retired, the Saudi Arabian also profited from retirement for Alex Walker to move into a top 12 finish.

Overnight rain led to a wet-but-drying track for round 26 on Sunday and, from fifth on the grid, Alvarez produced a star performance. Storming through to second position, he pressured pole-starter Alex Connor and on lap three made the breakthrough with a great pass into Luffield.

Instantly pulling away in the tricky conditions, Alvarez opened up an advantage of 1.7 seconds by lap eight and although title rival Maloney closed in during the latter stages when the rain returned, the Double R driver had enough in hand and took the win on lap 19 by 1.2 seconds.

Foster too made a good start from the third row of the grid, but after being the innocent party in a tangle involving two other cars on lap one his hopes of challenging for a third consecutive victory went badly awry.

Recovering in 14th position, the ultra-quick Briton began his march back through the order and an inspired drive – coupled with some superb overtaking on the slippery track – enabled him to break back into the top 10 by lap six. Into fourth by lap 13, Foster then took third from Connor into Maggotts a lap later after a tight battle to seal an outstanding recovery. He also posted fastest lap.

From 12th on the grid, Juffali was shuffled back to 15th during the early laps but moved through to 14th spot. Due to dramas for Connor and Mariano Martinez, Juffali was able to climb into the top 12 with five laps to go and on lap 18 she produced a tremendous pass to take 11th from Alex Walker. Unfortunately, an excursion soon after dropped Juffali back to a finish of 14th place.

More rain appeared for race three, round 27, and the championship battle between Alvarez and Maloney took a dramatic turn. At the start, pole-qualifier Foster launched perfectly on wet tyres to lead and he built a cushion of around three seconds before the Safety Car was deployed on lap 10.

The reason for the cautionary period was the tangle between Alvarez and Maloney as they fought over second position. From fourth on the grid, Alvarez moved up to third behind Maloney and he started to pressure over the first few laps before looking to make his move on the eighth tour.

Going to the outside into Brooklands, the Mexican got wheel-to-wheel with his rival but at the exit he was put wide onto the muddy grass and as he tried to rejoin the cars made contact at the next right into Luffield, resulting in both crashing out into the gravel on the outside of the corner.

When the race resumed Foster, who again took fastest lap, pulled away and went on to win at the end of lap 17 by 1.3 seconds and move to within 30 points of Alvarez and Maloney in the title battle with just three races to go.

Juffali began the race in 13th position and she remained in situ for the first part of the race, before moving up into 11th spot after the dramatic incident involving the points leaders. At the resumption, the Saudi Arabian continued to progress and after breaking into the top 10 on lap 14 she took ninth place on the penultimate tour and was just 0.2 seconds behind Connor at the flag.