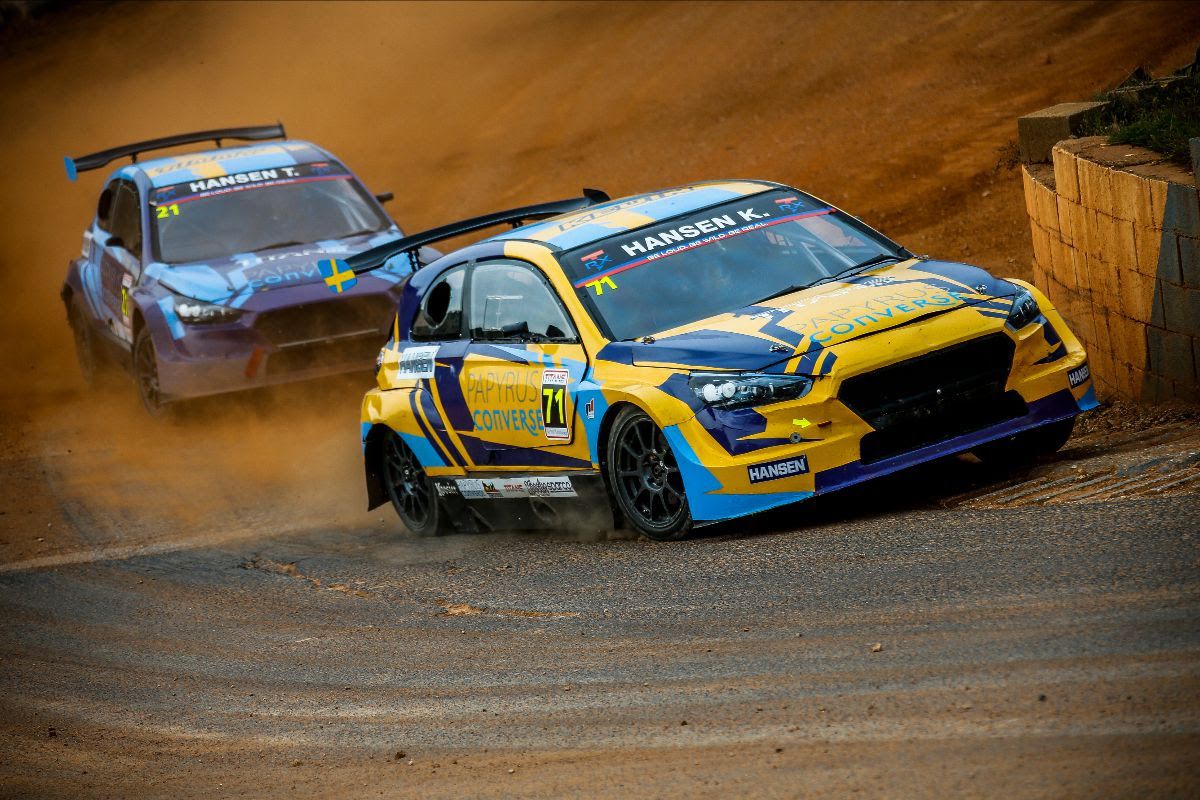 Timmy and Kevin Hansen shared the main event victories at the Nyirad Motorsport Centrum in Hungary as top-level rallycross racing returned to the historic track.

Coming into this weekend Timmy Hansen was trailing both Kevin Hansen and Topi Heikkinen in the standings, and needed a strong weekend to keep his title hopes alive. He got off to a perfect start on Saturday by leading hom Heikkinen in the round nine final.

With a heavy downpour taking place just before the final, grip was limited at the start. Nevertheless, all six drivers on the grid got away fairly equally, with Kevin Hansen passing Tamara Molinaro going into turn one.

At the front semi-final two winner 'CsuCsu' pressured Timmy Hansen into the first turn and was looking stronger early on in the wet conditions. However, contact in turn two ended up resulting in race-ending suspension damage, ending any home of a home victory for the popular Hungarian driver.

From then on Timmy Hansen was untroubled at the front, but the battle for second was very much on, with Jerome Grosset-Janin leading Heikkinen.

On the third lap of the race Heikkinen found a way past the Frenchman, with Grosset-Janin now in Kevin Hansen's sights as the Swede continued his fightback from a lowly grid position.

The kept each other honest over the next two laps, with Kevin Hansen holding the upper hand in the tight and twisty parts of the track, while Grosset-Janin at an advantage on the more open parts of the course.

On the penultimate lap Kevin Hansen made contact with Grosset-Janin's bumper multiple times, eventually finding his way past in the final complex of corners.

Kevin Hansen then gapped Grosset-Janin rapidly, and finished a comfortable third behind race winner Timmy Hansen and Heikkinen, despite a small fire developing in his Pantera RX6 on the last lap.

Grosset-Janin slowed considerably on the final lap due to visibility issues, but was able to hold on to fourth, ahead of Molinaro.

Ahead of the final, Reini Sampl, Abbie Eaton, and Ramona Karlsson all missed out from the first semi-final, which was won by 'CsuCsu' who opted to use wet tyres in the mixed conditions. He made light work of Heikkinen and Kevin Hansen, both of which opted to race on dry tyres.

in the second semi-final, with lessons learned from the first, every driver opted for wet tyres. Timmy Hansen won from Grosset-Janin, with Molinaro holding off Andreas Steffen for the final transfer spot.

Local wildcard Tamas Turi was eliminated along with Perry McCarthy who failed to finish the race following heavy contact with a barrier in the dirt section which brought out a red flag. McCarthy was later diagnosed with a rib injury.

On Sunday Kevin Hansen was dominant, topping qualifying for the first time this season, then winning the final with a textbook display.

He took full advantage of his front-row starting spot to lead into turn one ahead of Timmy Hansen and Heikkinen who had to resist pressure from a charging Grosset-Janin.

While the Hansen brothers flew in formation at the front of the field, Grosset-Janin continued to hound Heikkinen, with the Frenchman eventually passing the three-time event winner on lap three. That wasn't the end of their battle though, with Heikkinen keeping the pressure on until the final lap, although he couldn't find a way past.

That allowed Grosset-Janin to claim his first podium finish since round one, behind Kevin Hansen and Timmy Hansen, while fourth place for Heikkinen marked the first time he has missed the podium since round five at Montalegre.

In fifth was Eaton, who was making her first final appearance of her fledgling rallycross career.

The sports car ace scored a fine third in her semi-final, setting up her maiden main event appearance, and at the start she made light work of Steffen – the German driver eventually retired with suspension damage after making contact with a barrier on the second lap of the seven-lap final.

Ahead of the final, wildcard drivers Turi, Werner Panhauser, and Ronny C'Rock all failed to advance from the first semi-final, while Sampl, Dietmar Brandt, and 'CsuCsu' were eliminated in the second semi.

Molinaro was eliminated in the qualifying stage with engine trouble following contact with Eaton in Q2.

With his third win of the season, Kevin Hansen continues to lead the series standings as TitansRX gears up for its double-points grand finale at Estering in Germany in two weeks time.

A strong weekend for Timmy Hansen has thrust him right back into contention, while a difficult round 10 has dropped Topi Heikkinen front second to third, although he trails second place by a solitary point.

Grosset-Janin's podium coupled with Tamara Molinaro's early retirement in round 10 means that he now has firm hold of fourth in the points, although the Italian remains only 18 points behind.