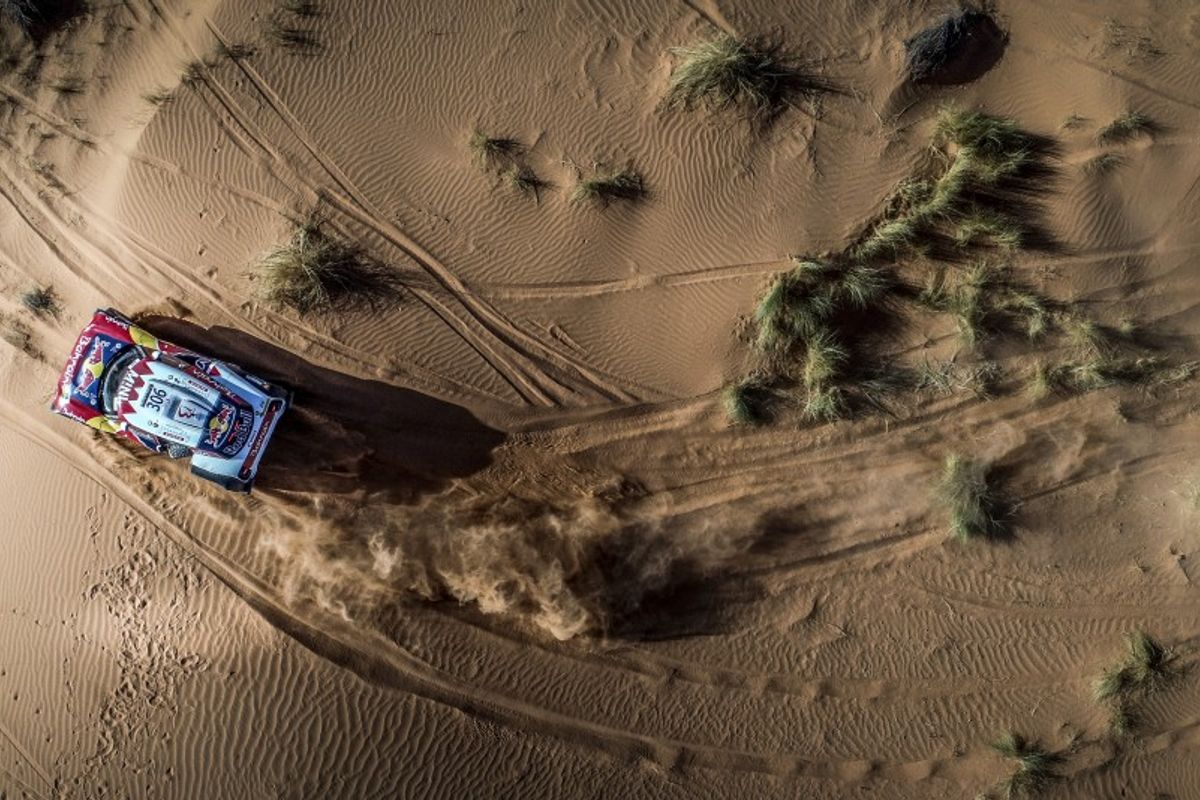 The MINI crew of Carlos Sainz and Lucas Cruz took their first stage win of the Rallye du Maroc, breaking the stronghold Nasser Al-Attiyah has enjoyed over the last two days. The Qatari and co-driver Mathieu Baumel continue to lead, however, and the Toyota crew head team-mates Giniel de Villiers/Alex Haro by 17 minutes and 21 seconds. Stéphane and Andrea Peterhansel also hold position in third, just 31 seconds further adrift at the mid-point of the final round of the FIA World Cup for Cross Country Rallies.

Today’s leg took in another long and hot selective section covering 360 kilometres, again looping in and out of the Erfoud bivouac. Navigation was tricky and all the crews were also using a new system of road book that will be introduced from 2020 to all cross country rallies. Al-Attiyah was cautious at the outset, knowing he’d lose time, but gained confidence with the road book and pushed harder towards the end of the section. “It was another long day but we made no mistakes,” he said. “I’m quite happy with our performance, it was difficult, hard, but the car and tyres worked very well.”

De Villiers was fourth fastest through the section, but still only 41 seconds off Sainz’s winning time. “It was a very nice, good but tricky stage with no issues; the most enjoyable stage so far,” said the South African.

The Peterhansels maintain a close third after beating de Villiers by a mere seven seconds in the section. “It was a good stage and Andrea did very good navigation the first time with the new road book. It’s not complicated and I feel comfortable, so for us it was a good first stage with this system,” said Stéphane. “It was different type of terrain in the north, not too rocky and lots of tracks.”

Sainz now slots into fourth overall, having won the three and a half hour stage by a mere 29 seconds. “It was a hard day for navigation and the co-drivers, but everything was fine for us, no problems. I’m slowly getting more and more confident back in the car, it’s a long time since I’ve driven,” said the Spaniard.

Mathieu Serradori and Fabian Lurquin dropped time to the frontrunners, but the Century Racing CR6 crew hold fifth overnight: “It was a difficult stage and the navigation was very hard; I’m content to arrive at the finish,” said Serradori.

Jakub Przygoński, co-driven by Timo Gottschalk, climbed to sixth, ruing the time lost in the opening leg. “It was a good stage, really nice in a new region,” said the Pole. “It was different terrain with nice tracks, fast with small bumps and tricky navigation, but enjoyable. I’m happy to be here and the car was good, it’s just a shame for the first day.”

While Toyota is currently enjoying a provisional one-two at the top of the leaderboard, the team also experienced disappointment with Bernhard ten Brinke and Fernando Alonso. Ten Brinke and Tom Colsoul started well, the Hilux crew fastest through the first part of the section before hitting trouble and abandoning the leg. “The stage was quite fast and we were driving a good speed,” said the Dutchman. “Two or three kilometres before the finish of the first section, in a river bed, if was off road and nice. But there was a hole one metre by two metres blocking 75% of the road and we hit it at 150 km/h and almost rolled. We had a broken wishbone and managed to repair it on the stage and get to the end of this section before coming back to the bivouac.”

Team-mates Fernando Alonso and Marc Coma suffered the same fate. “We had damage on the suspension, it was a big ditch nearly at the end of the first part of the section, at kilometre 75,” said Alonso. “Unfortunately we could not repair it and we had to come here [to the bivouac] and hopefully now the guys will try to do it and get ready for tomorrow.”

Leaders in T3, Aron Domzala and Maciej Marton, were the third crew to hit the hole, the Poles rolling three times but also escaping unscathed. The category is now being led by Gerard Farres Guell/Armand Monleon Hernandez who head Can-Am Maverick rivals and leaders in the T3 World Cup standings, Reinaldo Varela/Gustavo Gugelmin, by nearly 11 minutes.

Today’s penultimate leg is the longest of the rally at 409 competitive kilometres.