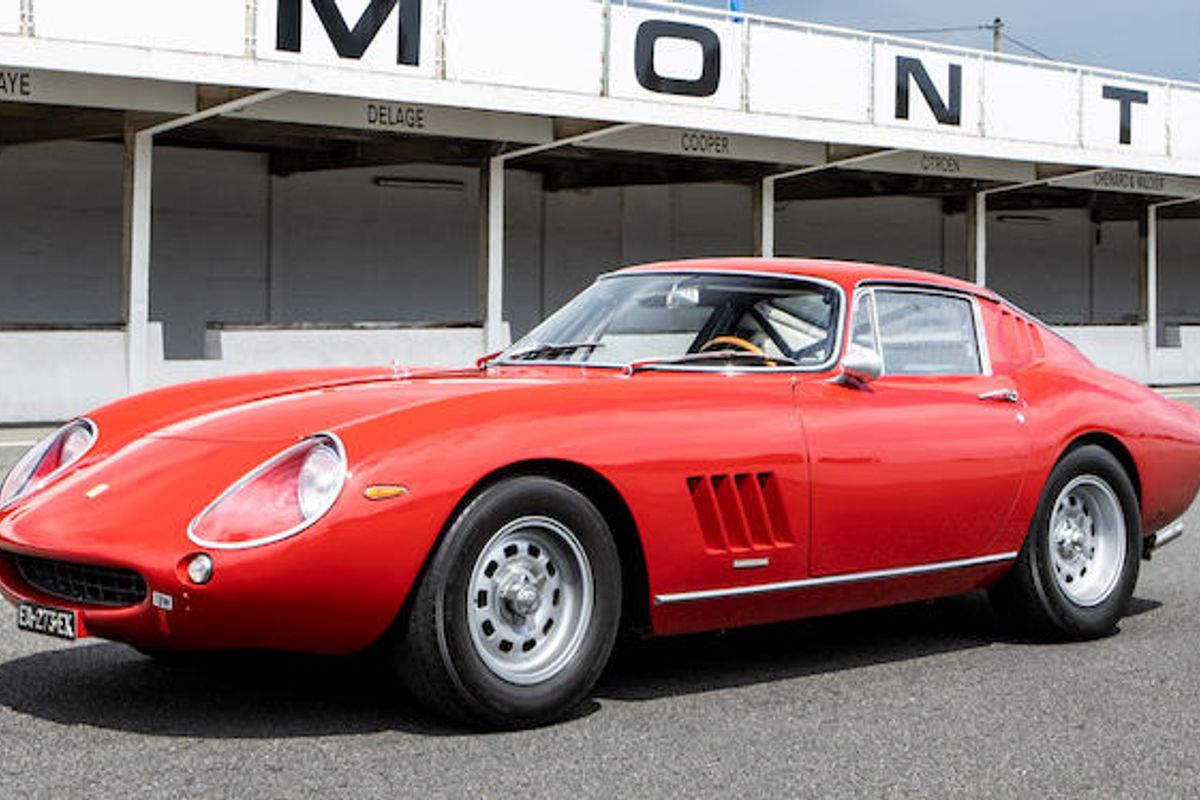 'The 275 GTB is... a superlatively vigorous, very agile and quick automobile. Its comfort, the quality of its finish, the original lines of its bodywork all justify its exceptionally high price, for it is an exceptional automobile. It is a thoroughbred, with luxury devoid of excess, and a fiery temperament... ' Jose Roskinski, Sport Auto, July 1965.
When Ferrari's highly successful '250' series was superseded in 1964 by the '275', Pininfarina was once again called upon to work his magic for the Maranello concern, creating a true classic of sports car design for the 275 GTB. Penetrative nose, long bonnet, purposeful side vents, high waistline, and short be-spoilered tail: these were all ingredients of the recipe, yet the result was so much more than merely the sum of its parts. The tail spoiler and cast-alloy wheels echoed developments first seen on Ferrari competition cars, while beneath the skin there was further evidence of racing improving the breed, the independent rear suspension - seen for the first time on a road-going Ferrari - employing a double wishbone and coil-spring arrangement similar to that of the 250LM racer. The adoption of a rear-mounted five-speed transaxle combining the gearbox and differential in a single unit helped improve weight distribution, and this feature would characterise future generations of front-engined Ferrari road cars. Body construction was entrusted to Carrozzeria Scaglietti, Ferrari's close neighbour in Maranello.

Now enlarged to 3.3 litres, the 60-degree V12 engine remained the familiar Colombo type, in standard form producing 280bhp at 7,600rpm. A higher - 300bhp - state of tune employing six Weber carburettors was available, and this was used for the handful of aluminium-alloy bodied 275 GTB/C (Competizione) models built, though customers purchasing a 275 GTB for road use could also specify aluminium coachwork and/or the six-carburettor engine.

Despite its near-perfect appearance, revisions to the original 275GTB were not long in coming: a longer nose, enlarged rear window, and external boot hinges being introduced towards the end of 1965. Mechanically the only major change was the adoption of torque tube enclosure for the prop shaft., replacing the sometimes troublesome open shaft. The prototype Series 2 'long nose' was built on chassis number '07707GT' and the last 'short nose' on '07827GT'.

The model's ultimate incarnation - the 275 GTB/4 - appeared in October 1966, the '/4' suffix denoting the presence of four, rather than the original's two, overhead camshafts. Sadly, by 1968 the progress of automobile emissions legislation had effectively outlawed the 275 GTB and its like from Ferrari's most lucrative export market, the United States, and the model was phased out later that same year after only 460 two-cam and 350 four-cam cars had been completed. Of the two-cam cars, the short nose/long nose split was approximately 250/210.

The 275 GTB had not been designed with competition in mind and there are only two works entries on record: in the Targa Florio and Nürburgring 1,000km, both in 1965. Nevertheless, the model became a favourite with privateers, the latter's standout achievement being Écurie Francorchamps' magnificent 3rd place at Le Mans in '65. Now acknowledged as one of the finest road-going Gran Turismo models ever produced by the Maranello manufacturer, the 275 GTB is among the most covered of all Ferraris.

Chassis number '08061' has the desirable long-nose aluminium-alloy bodywork, and left the factory equipped with triple-Weber carburettor induction. Finished in Rosso Chiaro, the Ferrari was first registered on 20th January 1966 in the Reggio Emilia region of Italy. Seven days later the car was sold new by Sefac SpA to its first owner, local resident Rodolfo Landini, who paid 5,750,000 Italian lire. Mr Landini had his Ferrari serviced regularly at the factory's Assistenza Clienti department in Modena before selling it in January 1968 to second owner John Michael O'Keefe, an Italian-domiciled Irishman living in Reggio Emilia. The car continued to be serviced and maintained by the factory in Modena, the last visit being recorded in May 1970.

Sometime later the Ferrari was exported from Italy to the USA and in 1974 was owned by Douglas Wolfe of Shoemakersville, Pennsylvania. '08061' was later listed in the Ferrari Owners Club Membership Roster as owned by Terence M Clark of Charlottesville, Virginia and in 1977 was sold to Mr Ed berner of New York, who kept the car until 2001. In October 2001 the Ferrari was advertised for sale in the USA, and the following year was sold by the UK-based dealership Fiskens to Gregory Noblet, son of the legendary French gentleman racing driver and works Ferrari GTO pilot, Pierre Noblet. The car was reregistered on UK plates as 'JGC 457C'.

Mr Noblet maintained the Ferrari with no expense spared, and over the next ten or so years he and '08061' would enjoy an outstanding run of successes in some of the most prestigious historic motor sports events, beginning with the Tour Auto in August 2004 and culminating in the Navarra Tour in October 2013. In between, Mr Noblet entered his 275 GTB in the following events, achieving numerous podium finishes (full results available):

It is worthwhile noting that '08061' was the only Ferrari 275 GTB invited to the prestigious 250 GTO road rally, and for a time led the event.

In 2014 the Ferrari was sold to its next owner who commissioned a full 'bare metal' restoration, which was undertaken in the UK by GTO Engineering at a cost in excess of €250,000. The rebuilt Ferrari then took part in the 2014 Tour Auto. The car has since been reregistered on French plates as 'EA-275-EK'

In 2015 '08061' passed to the current vendor. Its current specification includes a Roelofs Engineering engine equipped with six Weber carburettors. As one would expect, the braking system has been upgraded appropriately. Although mildly race-prepared, this car could be easily returned to original specification using the two boxes of spares and original parts included in the sale. These parts include the following:

A Bonhams specialist was fortunate enough to drive this 275 GTB at the Montlhéry circuit in France: "The car drives very well with an amazing sound and great brakes. It is the best Ferrari I have ever driven and faultless – what an experience!"
'08061' is Ferrari Classiche certified and comes with its Red Book. Also include is a copy of its Foglio di Montaggio, FIA HTP valid until 2026, French Carte Grise, Massini Report, and a comprehensive history file containing invoices and other documents. Presented in truly wonderful condition, and one of the nicest we have ever seen, this recently restored Ferrari 275 GTB Alloy wants only for an enthusiastic new owner keen to continue its illustrious career in historic motor sports or, alternatively, could easily be returned to original condition thanks to all the parts mentioned above.