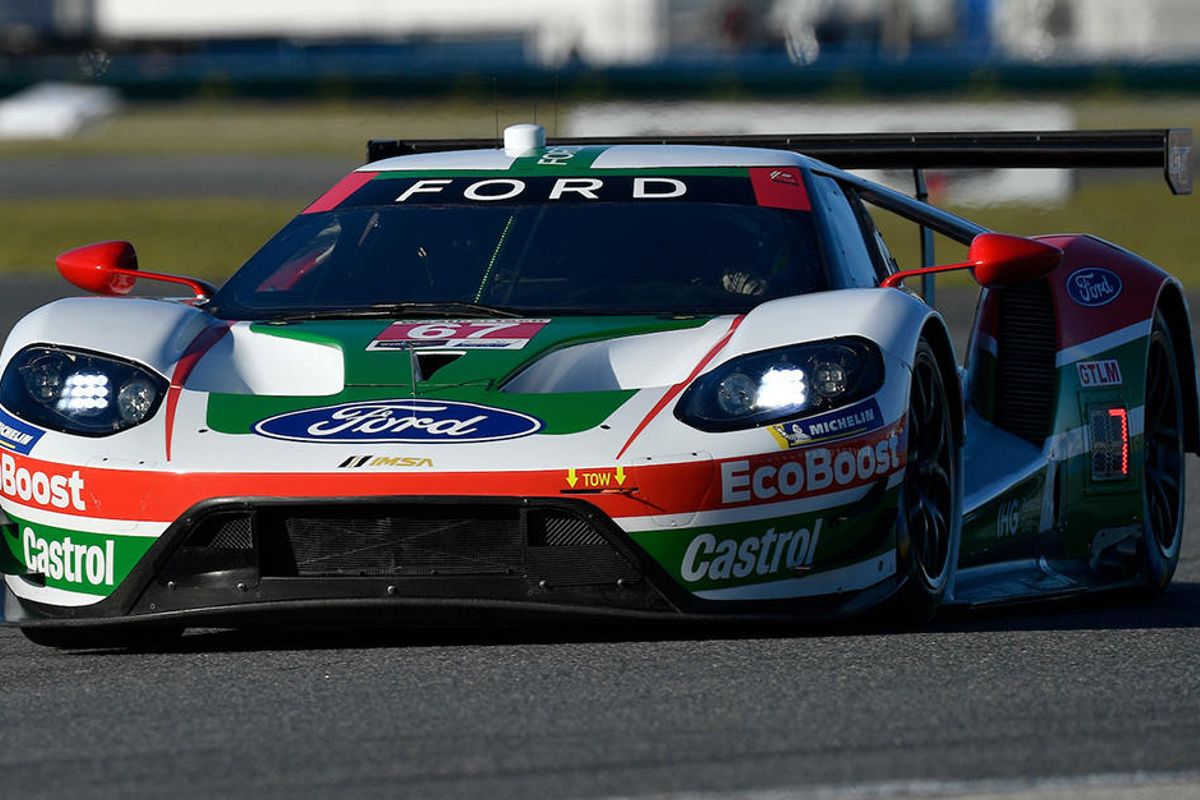 The latest chapter in the history of Ford Racing – a gripping true story of triumph more than a century in the making – will be completed at Motul Petit Le Mans on Oct. 12.

That’s when the iconic and inspiring Ford GT will make its final appearance as a factory-backed entrant in the IMSA WeatherTech SportsCar Championship. The current iteration of the Ford GT has left its imprint in this four-year run, competing in both the WeatherTech Championship and the FIA World Endurance Championship (WEC) with two-car operations in each series operated by Chip Ganassi Racing.

With the IMSA season finale at Michelin Raceway Road Atlanta ahead, the Ford GT program has been deemed a success. Combining the efforts in IMSA and WEC, the car has compiled 19 race wins, 22 pole positions and driven nearly 280,000 miles (equivalent to almost 11 trips around the world).

Fourteen of those victories have come in WeatherTech Championship GT Le Mans (GTLM) events, but it was the highly coveted 2016 class triumph at the 24 Hours of Le Mans by IMSA drivers Joey Hand, Dirk Mueller and Sebastien Bourdais – coming 50 years after the historic win by a Ford GT in the world-famous endurance race – that remains a beacon of the present-day program.

Mark Rushbrook, the global director at Ford Performance Motorsports, said it was clear from when the program was announced in late 2013, that capturing Le Mans on the golden anniversary of the first win was the top priority. Mission accomplished … and then some.

“As one single event, it is because that was the goal, to win Le Mans in 2016,” Rushbrook said. “The fact that we did is a very significant piece of the program. But it wasn’t just that one race and that one win, as significant as that was. The fact that the car and the teams were so competitive throughout the four years … I think that shows that it was a very effective and significant program in total, not just in one race.”

Hand, Mueller and Bourdais followed the epic 2016 Le Mans win by taking home GTLM honors the following year at the Rolex 24 At Daytona. It was the first of five WeatherTech Championship victories for the No. 66 Ford GT, including the most recent race on Sept. 15 at WeatherTech Raceway Laguna Seca.

“It’s been a great four years and I’m sad that it’s ending,” Mueller said. “Joey and I are super close and are mates, which is probably not really unique in this level of racing, but I remember my very first test in 2015. As soon as I touched ground and got out of the rental car, I felt like I’d been with the team forever. That’s a unique feeling, what you normally probably don’t get.

“There are no big egos. Everyone is as important as the next person. Everyone is working hand in hand for that one goal, winning races.”

The sister No. 67 Ford GT – with full-time co-drivers Ryan Briscoe and Richard Westbrook along with IndyCar champion Scott Dixon for the endurance events – has had the most success with eight class wins, including the first victory anywhere in the world for a Ford GT at WeatherTech Raceway Laguna Seca in 2016 and the Rolex 24 in 2018. Briscoe is well aware of the program’s significance.

“A good part of the program has just been being part of the program from day one until the end,” Briscoe said. “It’s such a historic program with such heavy involvement with everyone at Ford. It’s just been so much fun rewriting history and comparing what we were doing to the 1960s. It’s been a really special time of our racing careers. I’ve been proud of all of us having a leading role of what we did the last four years.”

The legacy of Ford’s racing exploits dates to company founder Henry Ford, who was determined to prove the capabilities of his cars by beating other fledgling manufacturers at the beginning of the 20th century. It was his son, Henry Ford II, who pushed Ford Motor Co. to enter and win at Le Mans in 1966. Edsel Ford, the son of Henry Ford II, was behind the decision to launch the present Ford GT in competition.

According to Mike Hull, managing director at Chip Ganassi Racing, that continuing desire to race and win within the Ford family inspires everyone involved in the program to push harder to achieve those results.

“The Ford family themselves are still very directly involved in Ford Motor Co.,” Hull said. “They have their lineage on their sleeve in terms of what’s important to them and the performance of their product. That goes back to Henry Ford having his springboard of winning that race years ago. That really started the company and I think they still hold that very, very close to their hearts.

“That makes for a terrific bond that goes well past the definition of partnership.”

Rushbrook emphasized the strength of the partnership as well that, in addition to Chip Ganassi Racing, includes chassis designer Multimatic, Roush Yates engines and Michelin tires. He’d love nothing more than to end this latest chapter of Ford Racing history with one last win in the Motul Petit Le Mans – an event that has eluded the Ford GT the past three years.

“That would be fantastic!” Rushbrook said of a season- and program-ending win. “All of these races now as close as the cars are, it takes flawless execution, great car, great drivers, great team sitting on the pit box. The team hasn’t let up; it’s not like they think the program is over. They know that the mission is to go win this race.”

Television coverage of the Motul Petit Le Mans begins on the NBC Network at noon ET Saturday, Oct. 12. The broadcast shifts exclusively to the NBC Sports App and NBCSports.com from 3-5:30 p.m. ET. NBCSN takes over the broadcast from that point until its dramatic conclusion on Saturday night. The NBC Sports App and NBCSports.com also will have live flag-to-flag coverage.

As always, IMSA Radio will have live coverage throughout the race week on IMSA.com and RadioLeMans.com, with a live race broadcast airing on SiriusXM Radio.

Tickets for the race are available at RoadAtlanta.com.