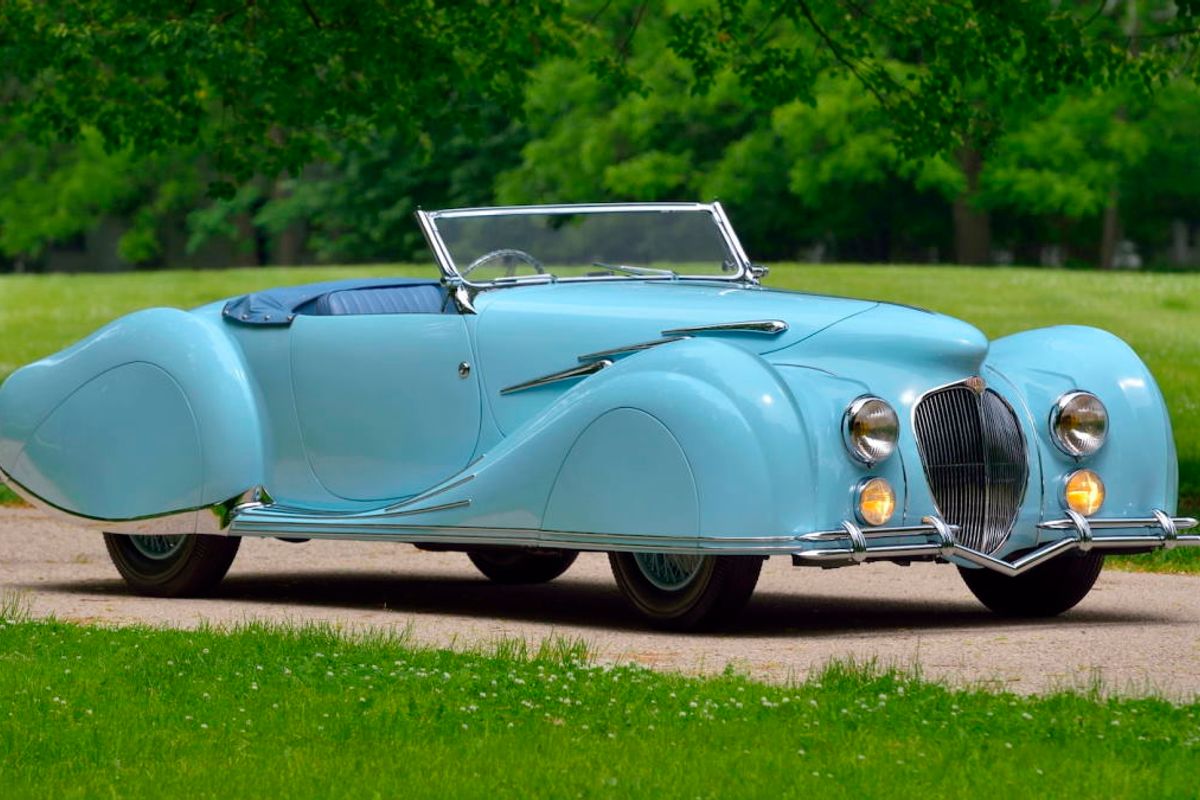 Part of the Petrozzini Estate Collection: 87 Cars Offered at No Reserve

This vehicle is available for immediate purchase as part of the Mecum Gallery Exposition sales format.

There are a few coachbuilders whose art and workmanship is immediately identifiable but none as obvious and flamboyant as that of the Paris firm of Giuseppe Figoni et Ovidio Falaschi. When a true classic car enthusiast sees a Figoni et Falaschi body, the coachbuilder’s iconic styling becomes evident and the make of the chassis becomes secondary. The flowing lines create a feeling of speed and freedom. Figoni et Falaschi continued to build its elegant creations from the 1930s through the 1950s.

Although Figoni created impressive designs for a number of important European chassis, some of the most memorable were on the French-built Delahaye. The most interesting and advanced custom bodies appeared on the 6-cylinder Delahaye 135M and MS, built from 1935 to 1954. Some enthusiasts consider the Delahaye 135M one of the most beautiful automobiles ever made, and the Figoni and Falaschi designs are an important basis of that idea. One of the most flamboyant Figoni et Falaschi designs was the Narval, or “Narwhal,” built on the Delahaye 135M chassis and introduced at the 1946 Salon de Paris. It was named Narval for its prominent front treatment, like a narwhal or perhaps a Beluga Whale, named—in French—for the Arctic sea creature it resembles. The graceful lines of the hood, center section and trunk evoke the shape of the narwhal’s body, and the car’s protruding nose clearly references the unicorn-like tusk that distinguishes the male members of the species.

Delahaye 135MS Chassis No. 800495 was one of seven built with an example of the flamboyant and artistic Figoni et Falaschi Narval Cabriolet and was selected to be shown at the 1947 Salon de L’Automobile de Paris. Its first owner was the legendary French singer-songwriter Charles Trenet (1913-2001). The 135MS chassis has a 116-inch wheelbase and uses independent front suspension and a live rear axle with parallel semi-elliptic springs. Its cable-operated Bendix brakes and the 17-inch Rudge center-lock wire-spoke wheels with black sidewall tires were standard. The engine is a 3.6L inline 6-cylinder with overhead valves and three French Solex downdraft carburetors producing 125 HP. Power is connected to the rear axle by a unique Cotal 4-speed transmission with a preselector shift mechanism at the steering column. The construction and operation of the shifter is similar to that of the 1936-37 Cord 810-812. The 135MS is easily capable of 100 MPH speed.

The Giuseppe Figoni-designed body is finished in light blue and features unique, chrome, curved side accents on each side of the hood. The chrome-plated front and rear bumpers are designed with artistically curved tubular bars. Full skirts envelope the front and rear wheel openings, creating a smooth aerodynamic styling cue. A dark blue convertible top finishes off the exterior appearance theme.

The interior trim of 800495 is finished in blue leather with individual pleated seats accented on the floor with blue Wilton carpet. The rear-hinged doors are trimmed in medium blue leather. The instrument panel is equipped with two large round gauges on either side of the center, including a tachometer, and a row of small rectangular gauges to the right. A dash-mounted clock was included with the instrumentation. The right-hand drive steering wheel is made of a clear, hard plastic with distinctive finger grooves around its perimeter and three chrome-plated banjo-type spokes. A special Charles Trenet La Carriere Antiles plaque is mounted on the dash.

This Figoni et Falaschi Narval cabriolet has undergone a meticulous show-quality restoration and has been in the hands of the same owner for 50 years. Its present excellent condition is ready for any concours d’elegance.

ABOUT THE COLLECTION
The late James Petrozzini was a man of discerning tastes and excellent investment sense. After getting a jump on real estate development in the city of Chicago in the early 1960s, Petrozzini founded Lincoln Park Property Management, which today is one of the largest residential development companies on the North Side.

That successful career and resulting financial fortune allowed Petrozzini the ability to indulge in his keen appreciation for fine art and antique automobiles and to acquire and care for those he considered to be the best in the world. Six of his amazing autos crossed the auction block in Monterey, while the remaining vehicles, of which there are nearly 100, stayed in sweet home Chicago awaiting their turn to parade across the Mecum red carpet at the Chicago 2019 auction.

A connoisseur and aficionado of many varying art forms, Petrozzini was also an accomplished artist himself—a musician, to be precise. As a semi-professional piano player, Petrozzini released a number of rock ’n’ roll records under a stage name in his younger years, not necessarily vying for audience attention, but rather in pursuit of a healthy artistic outlet. Often, for artists and collectors alike, creating, curating or even just enjoying art is itself the point—no audience required. And for Petrozzini, he was more than content to enjoy his various collections and art curations in private, away from prying eyes.

Though Chicago may be a metropolis, teeming with life and the relentless bustling of business and busybodies, Petrozzini somehow managed to tuck away his massive collection of desirable classic cars into a private storage facility at the heart of it all.

With the extensive selection of hidden treasure finally released from extended internment, the Petrozzini collection is now ready to get back out into the limelight as well as into the hands of successful bidders in Chicago.