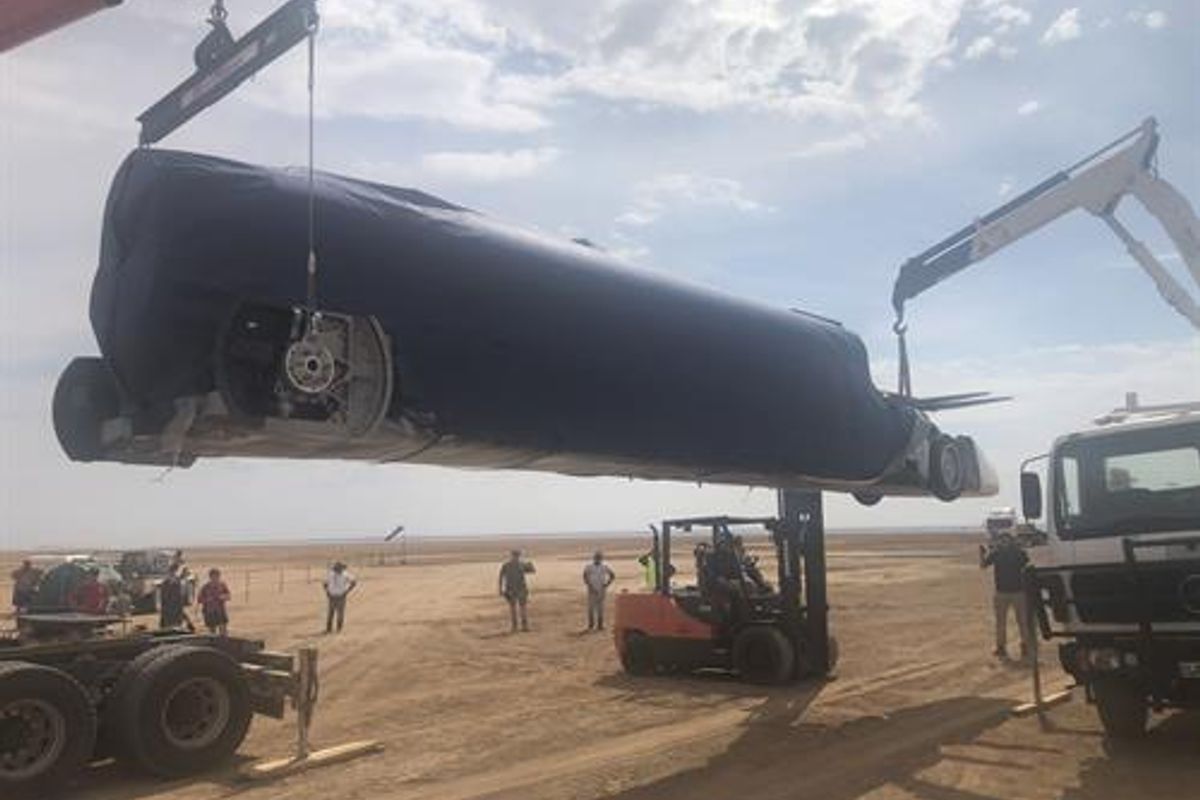 The Bloodhound LSR car has arrived safely at the Hakskeenpan desert, Northern Cape, South Africa, which for the next month will be home for the team, and the setting for the car’s first high speed test runs.

Before that can happen, the initial task is to re-assemble the car, which has travelled in a semi‑dismantled state from Luxembourg to Johannesburg by airfreight, before making the final 570‑mile journey to the desert on the back of an articulated lorry.

The high speed tests will see the Bloodhound LSR car blasting along the Hakskeenpan desert racetrack for the very first time, providing a spectacular showcase of British engineering to a global audience. The Bloodhound team’s primary objective is to engage and inspire people of all ages through the most extreme application of science, technology, engineering and mathematics.

The most powerful straight-line car ever was transported on the same pneumatic tyres as the car ran on in Newquay, and, as well as allowing the car to be manoeuvred on tarmac, they also increase the effective damping of the car, further protecting the car and systems from any shocks during its travels. Unable to stand up to the extreme stresses of high speed driving, these will be swapped out for precision machined solid aluminium wheels ahead of launch.

Once these narrower wheels, made specifically for desert testing, are fitted, engineers will be able to re-attach sections of carbon fibre composite bodywork to the front of the car, along with the nose section, which is vital for effective aerodynamics. The tail fin will also be fitted, completing the chassis and making the car ready for action.

The 25-strong team who flew out with the car joined an advance party who have been working tirelessly beneath the South African sun to set up the 50 x 50 m Desert Technical Camp on the edge of the Hakskeenpan desert. As well as the Bloodhound car itself, it houses a temporary workshop, complete with the precision tools needed to fine tune performance and maintain the car, including a lathe, milling machine and welding equipment.

The Bloodhound LSR car will be unveiled in all its fully assembled glory on the 21st October, before it begins the high speed test programme, during which it will build speed gradually in 50 mph increments over a month. The culmination of the four to five weeks will see the car hitting mind-blowing speeds of 500+ mph (800+ km/h).

Bloodhound LSR driver and current World Land Speed Record holder Andy Green said: “After years of work to prepare the car, and following almost a decade of preparation of our desert track by the Northern Cape Government, we’re delighted to finally be here. The next few weeks will allow us to test the car and train the team, ready for our assault on the Outright World Land Speed Record next year.”

World’s New Straight-Line Racing Track
The 10 mile (16 km) desert racetrack has been prepared by 317 members of the local Mier community, funded by the Northern Cape Government. They have moved a staggering 16,500 tonnes of rock from 22 million square metres of dry lakebed – the largest area of land ever cleared by hand for a motorsport event, and testament to the partnership forged between the Bloodhound team, the local community and the Northern Cape Government.

Bloodhound CEO Ian Warhurst explained: “The section of the track we’ll use is 16 km (10 miles) by 250 m, with large safety areas on both sides. This allows us to lay out up to 25 individual tracks side by side, if we need them. This is important as we can’t run over the same piece of ground twice because the car will break up the baked mud surface as it passes. We need multiple tracks so we can build speed slowly and safely – going up in 50 mph (80 km/h) steps, comparing real-world results with theoretical data – and Hakskeenpan is the perfect place to do this.

“The surface is hard, too, which means we’ve been able to design slightly narrower wheels that reduce aerodynamic drag. The desert surface also has a slight degree of ‘give’, which will work with the suspension to give a smoother ride, reducing vibration inside the car.”

Key Facts
The Bloodhound LSR car is a combination of fast jet, F1 car and spaceship. The project is followed in over 220 countries and territories.

1,000 mph
The project is now split into two phases. Phase one’s target is to break the world land speed record (currently 763.035 mph / 1,227.9 km/h). This is necessary to understand how the car behaves as it enters the transonic stage initially and then supersonic speed levels. Upon the successful completion of phase one, the team will review the data and technical challenges before embarking on phase two, and the challenge of safely reaching 1,000 mph.

Engine for high speed testing
The high speed testing will be conducted using the car’s Rolls-Royce EJ200 jet engine, normally found in a Eurofighter Typhoon. These engines produce a peak thrust of 20,000 lbs (90 kilonewtons), equivalent to 54,000 thrust hp, or the combined output of 360 family cars.

Wheels
The solid aluminium wheels have been specially designed for the desert surface. Measuring 900 mm in diameter and weighing 90 kg each, they are designed to spin at up to 10,200 rpm (revolutions per minute) – more than four times faster than wheels on a Formula 1 car at top speed. The result of 30 years of research and design, they were created by an international consortium and forged from one of the highest aircraft grade aluminium alloys in the world: 7037.

The wheels have a V-shaped keel which digs into the alkali playa (baked mud) surface by 15 mm when the car is stationary. As speeds increase, the wheels will rise up out of the mud surface and plane in much the same way as a speedboat rides up on the surface of the water. At 500 mph (804 km/h) and above, just a few millimetres of metal will be in contact with the desert surface, and the giant aluminium discs will act more like rudders than the wheels on a conventional car.