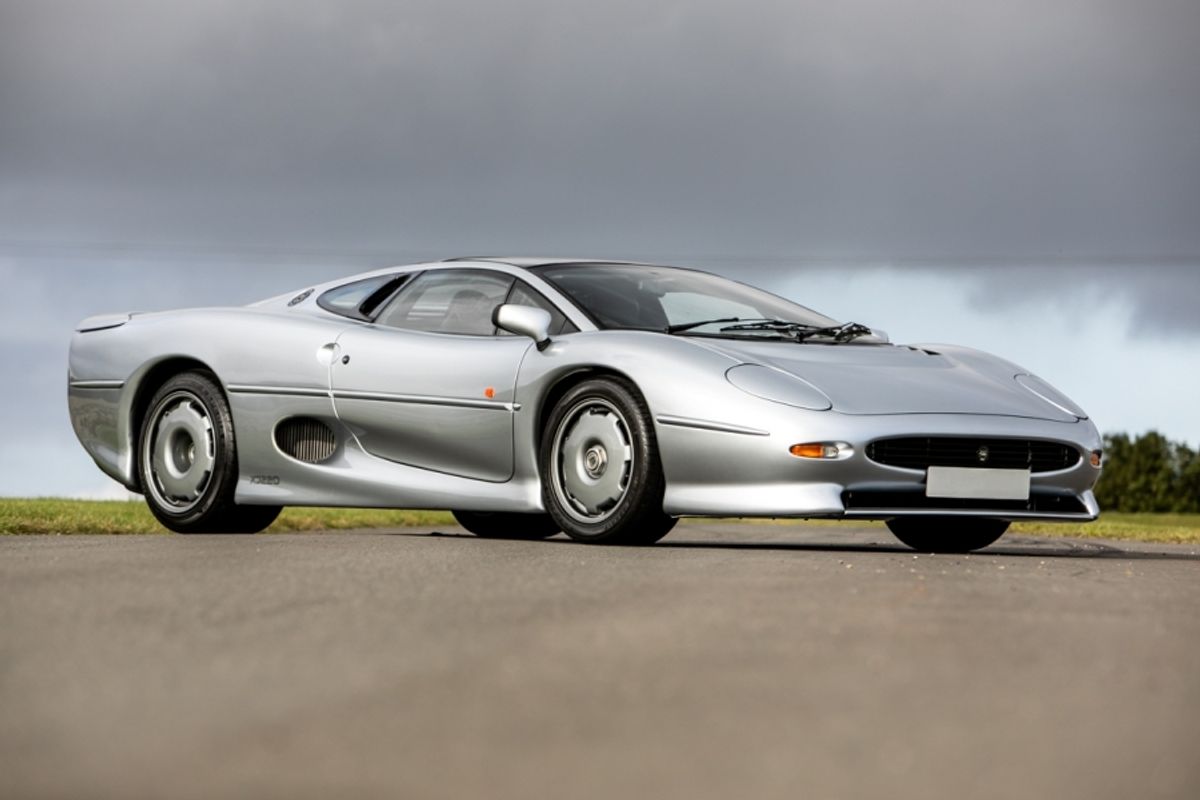 Details Specification
•    UK-supplied, right-hand drive, XJ220 with 2,000 miles from new under its two owners
•    Delivered new to Sir John Madejski in April 1992 in Spa Silver with a Charcoal interior
•    Purchased by our vendor, the second owner, from Sir John in 2010 and part of his collection ever since
•    £27,000 spent with XJ220 specialist, Don Law, in 2016 including replacement of the fuel cell and other recommended work with invoices on file
•    An extremely rare opportunity to acquire a very low mileage, low owner, example of one of the most significant supercars of its era

With 0-60mph acceleration in a brutal 3.5 seconds, the XJ220 was indisputably the fastest road car on the planet when the prototype was revealed at the 1988 British Motor Show in Birmingham. The response was sensational and, as expected, orders and the required £50,000 deposits flooded in from all corners of the world. The original concept was for a V12-engined car with a six-speed gearbox and four-wheel drive priced at just under £300,000, however, some four years later when production finally commenced, the XJ220 had become a two-wheel drive, twin-turbo V6 with a five-speed box on offer at £470,000. Predictably, many of the 1,500 option holders tried to cancel their purchase blaming the massive change in the specification but the collapse in values of collectable supercars at the time was probably more of a factor. Eventually, the car found 275 buyers and the others don't know what they missed. Producing an impressive 549bhp at 7,000rpm/473lb.ft at 4,500rpm and now slightly shorter by some 10 inches courtesy of the smaller dimensions of the V6 engine against the bulky V12, but still, with a not inconsiderable girth of six feet and six inches, the XJ220 proved more than capable of reaching its target maximum speed. In 1992, at the Italian Nardo test track, Formula One and sportscar ace, Martin Brundle, recorded 212.3mph around the banking in standard trim and 217.1mph with the catalytic converters disconnected, the latter speed equivalent to 223mph on a straight road.

Thanks to racing-developed inboard wishbone suspension and huge ventilated disc brakes with four-piston callipers, it held the road beautifully and stopped equally as well. Production of the car began the following year in a purpose-built factory at Bloxham in Oxfordshire with the first cars delivered in July to, amongst other well-known names, Elton John, Baron Hamer of Alford and the Sultan of Brunei. On the circuits, the Jaguar also proved highly effective. In the competition version, the XJ220C, another sports car ace, Win Percy, took victory on the car's race debut in the BRDC National Sports GT Challenge. In the 1993 Le Mans 24 Hours John Nielsen, David Brabham and David Coulthard finished first in the GT class, though only for their XJ220C to be subsequently disqualified over a spurious technical infringement.

Offered here is a very special example of this iconic 90s Supercar. It is a UK-supplied, right-hand drive example that’s covered a remarkable 2,035 miles from new in the hands of just two owners. It’s finished in the highly desirable colour combination of Spa Silver with a Charcoal interior and has been owned by our vendor, the second owner, since 2010 when he bought the XJ220 from its first owner, Sir John Madejski. Sir John has a wide range of commercial interests and achievements spanning property, Broadcast Media, hotels, restaurants, football and is the founder of the magazine which became Autotrader. Our vendor is no less a celebrity, being a well-known and respected Historic racer and businessman.

Having covered a tiny mileage it’s easy to see in the cars accompanying history file that no expense has been spared maintaining this rare Jaguar. During our vendor’s ownership, JD classics were initially entrusted to look after the car and invoices in the file clearly detail the specialised attention the XJ220 received. More recently, model experts Don Law, have looked after the car for the vendor. Indeed, there are significant invoices in the file from 2016 when £27,000 was invested recommissioning the car following long term storage and this work included replacing the Fuel Cell, other, model-specific, timed replacements and naturally a full service. All the original books are included in the history file, with both the cars owners electing to leave the service book untouched, preferring to attach the relevant invoices detailing work that’s been carried out.

Silverstone Auctions are delighted to offer such a special example to the open market for the first time in nearly ten years. Indeed, this car is being stored with Silverstone Auctions until the sale in November, and we welcome any pre-sale inspection.