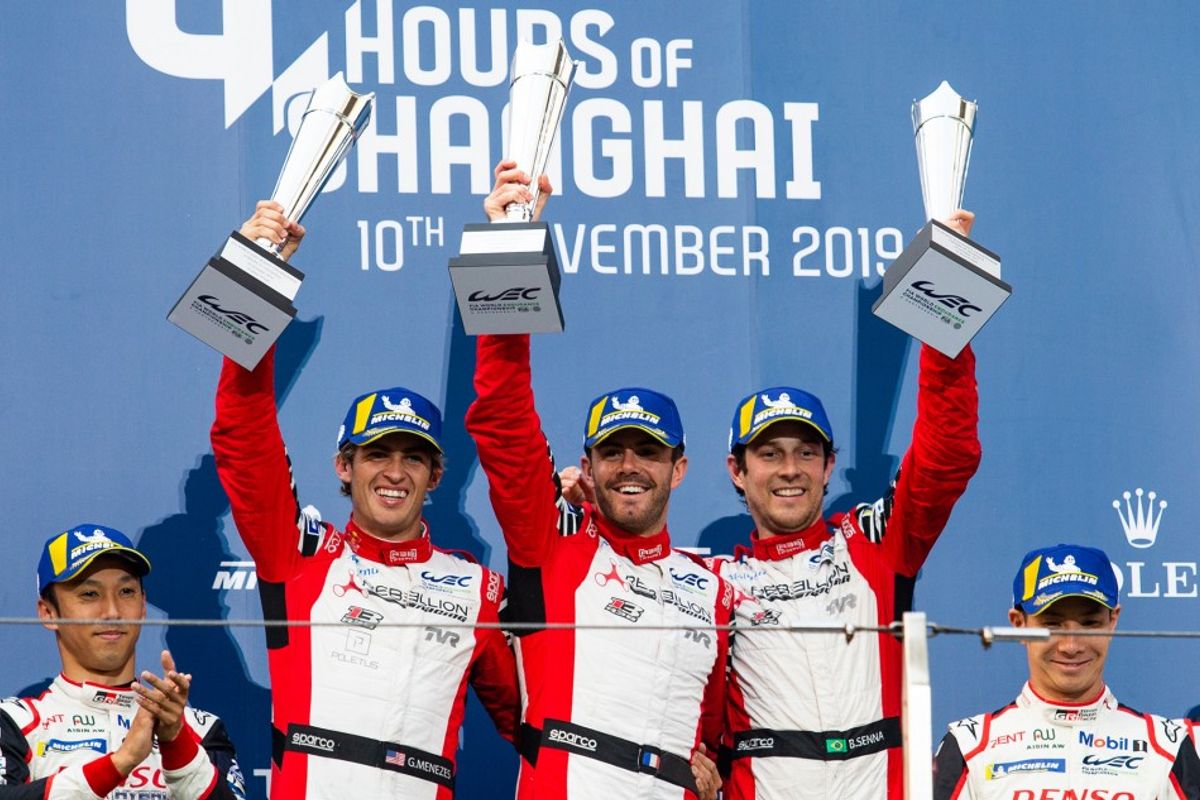 The no1 Rebellion Racing R13-Gibson of Norman Nato, Gustavo Menezes and Bruno Senna took the chequered flag at the end of the 4 Hours of Shanghai to secure the first ever WEC victory on the road by a private LMP1 team.  Bruno Senna crossed the line 66 seconds ahead of the no8 Toyota TS050-Hybrid of Kazuki Nakajima and lapped the no7 Toyota in the final ten minutes of the race.

The LMGTE Pro win went to the no51 AF Corse Ferrari of James Calado and Alessandro Pier Guidi, the first win of the 2019/20 season for the Anglo-Italian pairing and the first sine the 24 Hours of Le Mans in June.  The no95 Aston Martin Racing Vantage had been leading the race but a tyre issue forced Marco Sorensen to make an unscheduled pitstop, dropping the Danish crew down to fifth.

JOTA took the victory in the LMP2 category with Anthony Davidson, Roberto Gonzalez and Antonio Felix Da Costa finishing ahead of the their stablemates Ho-Pin Tung, Will Stevens and Gabriel Aubry in the no37 Jackie Chan DC Racing Oreca.

TF Sport scored their second WEC win in the LMGTE category, Charlie Eastwood finishing ahead of the no57 Team Project 1 Porsche despite a short ‘splash and dash’ stop for fuel five minutes from the end of the four hour race.

At the start the two Team LNT Ginettas and the no8 Toyota Gazoo Racing TS050 got ahead of the pole sitter, Norman Nato in the no1 Rebellion R13 as the French driver struggles with grip issues at the start of the race.  The no6 Ginetta of Charlie Robertson was leading the no5 car of Ben Hanley with Sebastien Buemi in third ahead of Kamui Kobayashi in the no7 Toyota.  However, the start was judged to have been too good for the two Ginettas and the no7 Toyota and a drive through penalty was issued in the second hour of the race.

In LMGTE Pro there was an epic battle for the lead with the no92 Porsche of Kevin Estre being pushed down to second after starting on pole by Nicki Thiim in the no95 Aston Martin.  All six cars were fighting for position with the no51 Ferrari and the no97 Aston Martin fighting over third place.

Estre kept the pressure on the lead car and after 45 minutes of racing the reigning world champion moved ahead of the Aston Martin.

LMP2 saw Cool Racing lose the lead at start to Jackie Chan DC Racing car driven by Will Stevens, who built up a healthy gap in the opening stint over Antonin Borga who survived contact with the no78 Proton Competition Porsche.  Anthony Davidson surges through to second place in the no38 Jota Oreca-Gibson, with the no33 High Class Racing in third with Kenta Yamashita at wheel.

The no56 Team Project 1 Porsche 911 RSR led away from LMGTE Am pole with Egidio Perfetti at the wheel.  There was contact with Paul Dalla Lana’s no98 Aston Martin on opening lap, with the Canadian dropping down the order as a result.  Perfetti receives drive through penalty for the contact and lead is handed to TF Sport Aston Martin driven by Salih Yoluc.

Meanwhile back at the front of the field the no1 Rebellion Racing R13 opened up a 35 second lead over the no8 Toyota at the half way point of the 4-hour race. The second placed TS050, driven by Brendon Hartley, was 35 seconds ahead Jose Maria Lopez in the no7 Toyota, the Argentine working hard to make up the time lost during the drive through penalty for the jump start.  The two Team LNT Ginettas were fourth and fifth having also served a drive through penalty each.

At the two hour mark the no95 Aston Martin Vantage was back at the head of the LMGTE Pro field after the no92 Porsche had to serve a ten second stop and go penalty for an unsafe release during the first pitstop and dropped to third place behind the no51 Ferrari as a result.  Marco Sorensen had a 12 second lead in the no95 Vantage over the Ferrari of Alessandro Pier Guidi, with Michael Christensen’s no92 Porsche 911 was 12 seconds behind the Ferrari.

2014 World Champion Anthony Davidson’s push in the opening hour saw Ricardo Gonzalez leading the LMP2 category in the no39 Jota Oreca-Gibson, the Mexican enjoying a 20 second lead over the no22 United Autosports Oreca of Phil Hanson, the British driver on a different pitstop strategy after the team pitted early to remove debris from the air intake.  The no37 Jackie Chan DC Racing Oreca of Ho Pin Tung was third and closing fast on the second placed car at the end of the second hour.  The Chinese flagged car caught and passed Hanson for second with just over 90 minutes of the race left on the clock.

TF Sport built on their early lead with Salih Yoluc handing over the no90 Aston Martin to Jonny Adam with a healthy 20 second lead over the no57 Team Project 1 Porsche with the recovering no56 Porsche of David Heinemeier-Hansson in third.

Rebellion Racing continued to lead the race in the third hour with Bruno Senna taking over from Gustavo Menezes.  The Brazilian holding a comfortable lead over the two Toyotas led by the no8 TS050 of Kazuki Nakajima.

At the top of the third hour the no95 Aston Martin of Marco Sorensen went off the track at Turn 14 when the rear left tyre exploded, littering the track with debris.  The Dane managed to get the car back to the pitlane for a new tyre, with the Full Course Yellow being displayed to allow the marshals to clear the track.  This allowed the no51 AF Corse Ferrari of Alessandro Pier Guidi to take the lead in LMGTE Pro and all of the lead cars in both the LMP1 and LMGTE Pro classes headed to the pits to take advantage of the Full Course Yellow.

When the race went green again the Rebellion Racing had a 35 second advantage and Senna was able to pull a few more second out on the next few laps.  The no51 Ferrari had a 14 second gap to the no92 Porsche of Kevin Estre with the no97 Aston Martin in third but under pressure from the no91 Porsche of Gianmaria Bruni.  The no95 Aston had rejoined in 5th in class 26 seconds behind the leading Ferrari.

The battle for the LMP2 victory continued after the race went green with the no38 JOTA Oreca, now with Alex Da Costa at the wheel, holding a 12 second advantage over the no22 Oreca of Paul Di Resta, with the no37 Jackie Chan DC Racing Oreca a further 17 seconds back in third.

The no90 TF Sport Aston Martin was also holding a commanding lead as Jonny Adam handed over to Charlie Eastwood for the final part of the race.  The Irish driver was 34 seconds ahead of the no57 Team Project 1 Porsche and a lap ahead of the third placed no83 AF Corse as the clock counted down to the final 30 minutes of the four-hour race. In the end Eastwood brought the car home 16 seconds ahead of the Porsche when he had to make a dive for the pitlane for a splash of fuel five minutes from the end of the race.  The no98 Aston Martin Racing Vantage completed the LMGTE Am podium, a great result considering Paul Dalla Lana had been unceremoniously spun around on the opening lap, dropping the car to the back of the field.

The LMP2 win went to the no38 Jota Oreca 07 with Antonio Felix da Costa crossing the line to score the team’s first win in their first full season of the WEC and the first WEC win for tyre manufacturer Goodyear.

The no51 488 came home at the front of the two Porsche 911s to record Ferrari’s first LMGTE Pro win in Shanghai.  Alessandro Pier Guidi crossed the line just 6.7 seconds ahead of Kevin Estre in the no92 Porsche, with the no91 911 RSR-19 another 13 second further back.

Bruno Senna crossed the finish line to the delight of his teammates and the whole Rebellion Racing team who lined the pitwall.  Senna also becomes the first driver to record wins in each of the four WEC classes.  To underline Rebellion’s dominance Bruno Senna lapped the no7 Toyota of Mike Conway 15 minutes before the chequered flag and the no8 TS050 of Kazuki Nakajima was the only other car on the lead lap, 66 seconds behind the R13-Gibson.

The next round of the 2019/20 FIA World Endurance Championship will be the 8 Hours of Bahrain on Saturday 14 December.