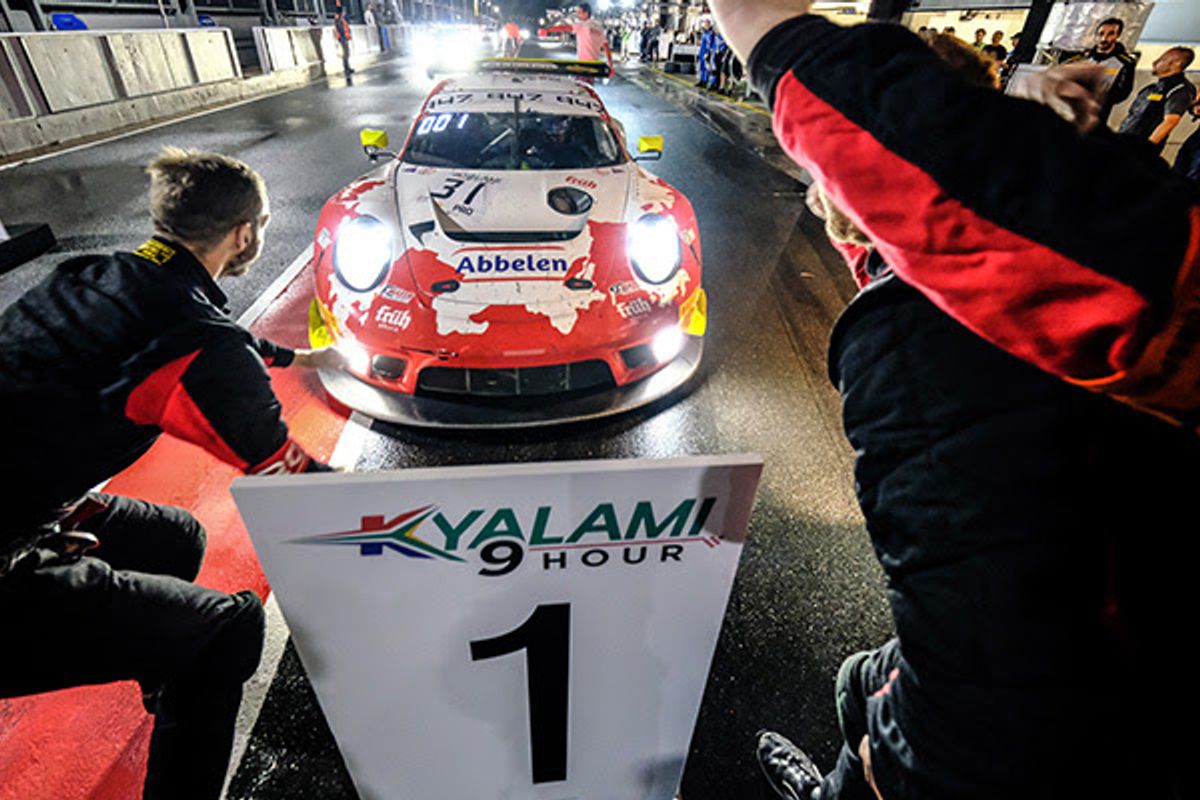 Porsche and Dennis Olsen are the 2019 Intercontinental GT Challenge Powered by Pirelli champions after a dramatic conclusion to this year’s title showdown at the revived Kyalami 9 Hour.

South African fans had waited 37 years for their endurance classic to return, but the hiatus was more than worth it. A race mostly run in bright sunshine ended under the cover of darkness and in a cloud of spray when the action finally resumed following a two-hour-long Safety Car period caused by heavy rain.

Seven drivers entered the season finale with a chance of winning the title, while Porsche had to overcome a 22-point deficit in order to beat Mercedes-AMG. And it received a helping hand early on when GruppeM’s entry, which also featured Drivers’ Championship leader Maxi Buhk, retired on lap one with an engine issue.

That opened the door for Maxi Goetz and Olsen who began the day six and 10 points, respectively, behind Buhk. Sustained pressure from the other four protagonists – Frederic Vervisch, Dirk Werner, Matt Campbell and Christopher Haase – failed to materialise.

Instead, it was GPX’s Porsche – eligible to score Manufacturers’ points but without a Drivers’ contender among its ranks – that made much of the running despite initially appearing behind Jordan Pepper’s double-stinting Bentley on the timing screen.

A Safety Car period to retrieve Strakka’s crashed Mercedes-AMG – the manufacturer’s second nominated car to retire within the first three hours – left GPX out front from Walkenhorst’s BMW, which had steadily climbed the order after starting 16th, and Frikadelli’s Porsche. The battle included Krognes’ stunning switchback pass on Tandy as well as the latter tagging his Porsche team-mate Christensen into a spin. Fortunately, both 911s re-joined without damage, although the subsequent drive-through penalty initially dropped the newly-installed Olsen out of contention.

Instead, SPS Automotive Performance’s Mercedes-AMG took up the chase. Maxi Goetz, Yelmer Buurman and Luca Stolz found themselves out of sequence after an early pitstop to remove debris from their car’s radiator, but had the speed thereafter to keep pace with the Porsche and BMW. And when their strategies converged, there was barely two seconds between them.

However, a biblical lightning storm and torrential rain were about to play their part in deciding both titles. It arrived with two-and-a-half hours left on the clock and prevented any green flag running until 25 minutes remained.

When racing finally resumed, SPS’s Buurman was out front and in prime position to seal the Manufacturers’ title for Mercedes-AMG and Drivers’ crown for Goetz. But that all changed within one lap of the restart when Lietz, Tandy and Catsburg muscled their way past.

Lietz then duly moved aside for Tandy, whose extra points were enough to give Olsen the Drivers’ crown. Catsburg also dispatched the GPX Porsche, but was unable to catch Frikadelli’s example over the closing stages.

SPS slipped to fifth while Oliver Jarvis, Edoardo Liberati and Alex Imperatori completed the top-six in KCMG’s #18 Nissan, which was a top-six candidate throughout.

Red flagging the race during the worst of the conditions would have handed victory to BMW Team Schnitzer, but Augusto Farfus, Martin Tomczyk and best-placed South African Sheldon van der Linde were forced in for a splash and dash just as racing resumed. They finished seventh, one place ahead of Dinamic’s Porsche which hung around the top-six without ever threatening a podium.

Sebastian Golz, Project Manager 911 GT3 R: “Three wins from five races, and podium finishes at all rounds – that’s how you win championships. The key to our success was the excellent teamwork of our squads around the world. The final race at Kyalami with sun, heat, lightning, thunder and rain was like a rollercoaster ride. In the end we deserved to win. Now it’s time to celebrate.”

Dennis Olsen, #31 Frikadelli Racing Porsche 911 GT3 R: “This is definitely the best day of my career by now. When I was asked recently to name my greatest achievement, I said it was the victory at Bathurst. When I was then asked what could be better than that, I said a victory at Kyalami, winning the Manufacturers’ title with Porsche as well as the Drivers’ Championship. That has now happened – unbelievable, it feels like a dream. When the race was finally restarted, I had a good feeling. If you have someone like Nick Tandy in the Porsche 911 GT3 R on a wet track in the final sprint, then anything is possible.”