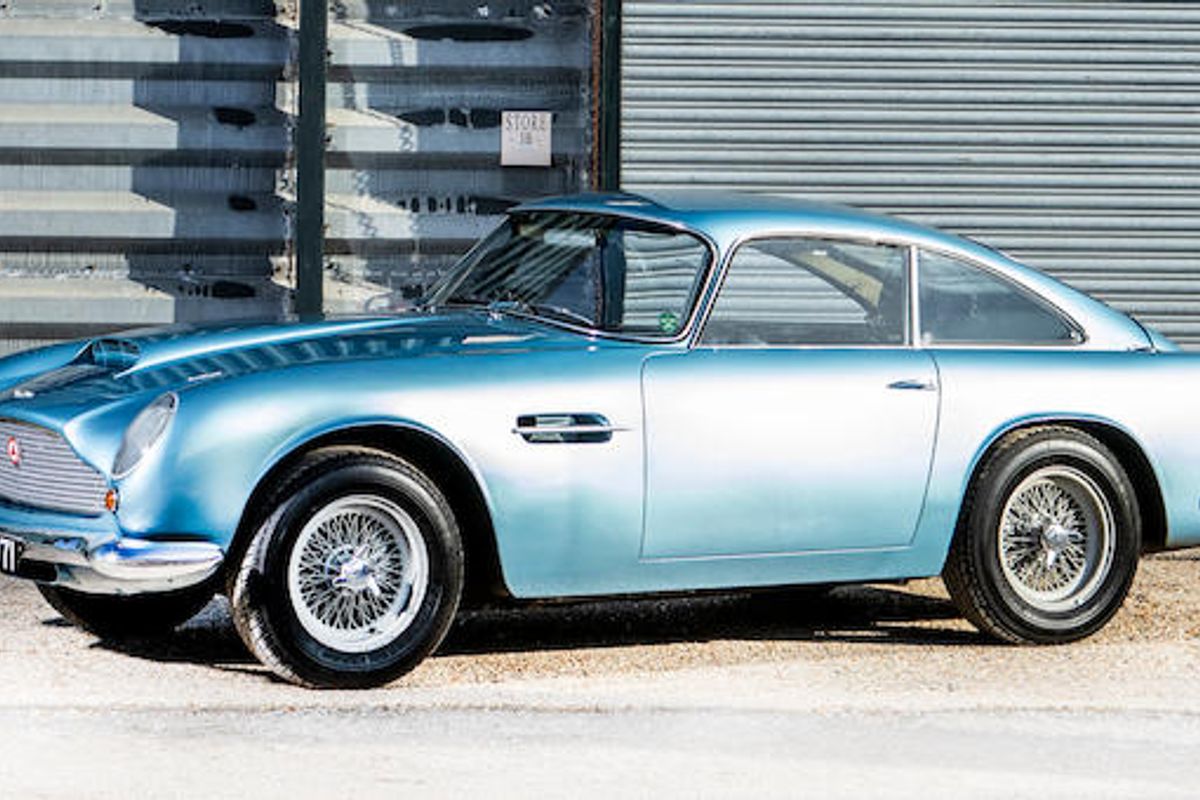 Footnotes
'For many Aston Martin enthusiasts the DB4 was the best of the post-war cars. Previous cars were lacking in power while the later DB5 and DB6 put on weight and were more like fast tourers than high-speed thoroughbreds – and amongst the DB4s the DB4GT was the most thorough all-round Grand Touring car of the lot...' – Mike Twite, 'Motors', 1967.

Launched at the London Motor Show in 1958, the Aston Martin DB4 emphatically demonstrated that a British manufacturer could better the Italians at their own game when it came to constructing the ultimate Gran Turismo. Its specification included a completely new steel platform chassis with disc brakes all round, and a race-developed twin-cam six-cylinder engine, all clothed in a perfectly proportioned aluminium body designed by Carrozzeria Touring of Milan. Overall, the DB4 was state-of-the-art for its time, a masterpiece of robust British engineering combined with exquisite Italian styling.

Engineered under the watchful eye of Harold Beech, the immensely strong platform-type chassis replaced the DB2/4's multi-tubular spaceframe, the latter being considered incompatible with Touring's Superleggera body construction that employed its own lightweight tubular structure to support the hand-formed aluminium-alloy body panels. The trailing-link independent front suspension of the DB2/4 gave way to unequal-length wishbones while at the rear the DB4 sported a live axle located by Watts linkage instead of its predecessor's Panhard rod.

The new car's competition potential had been recognised from the outset and the factory lost no time in developing a lightweight version suitable for racing, the resulting DB4GT debuting at the 1959 London Motor Show. The model had already been proven in competition earlier that year when the prototype driven by Stirling Moss ('DP/199') won its first race at Silverstone. Extensive modifications to the standard car took 5" out of the wheelbase and replaced the rear seats with a luggage platform on all but a small number of cars. Together with lighter, 18-gauge bodywork, these changes reduced the car's weight by around 200lb (91kg).

The GT used a tuned engine which, equipped with a twin-plug cylinder head and triple Weber 45DCOE carburettors, produced a claimed 302bhp at 6,000rpm, a useful increase over the standard car's claimed 240bhp. Maximum speed, of course, depended on overall gearing but 153mph was achieved during testing with a 0-60mph time of 6.1 seconds recorded. The DB4 was also one of the first cars to go from standstill to 100mph and then brake to a dead stop on under 20 seconds, a tribute, in part, to its up-rated Girling brakes as used on Aston Martin's sports racers of the era.

Viewed from the front, the GT was readily distinguishable by its faired-in headlamps with Perspex covers, a feature later made standard on the DB5 and DB6. The rear screen and quarter-windows were Perspex on many examples; bumper over-riders were deleted and the wind-down windows were frame-less within the doors. Twin Monza quick-release competition fuel fillers were added atop the rear wings, leading to a large-capacity fuel tank mounted flat in the boot. GTs were fitted as standard with lightweight Borrani 42-spoke wire wheels with alloy rims and three-ear 'knock-offs'. Trimmed to full Aston Martin road car specification, the interior boasted fine Connolly leather upholstery and deep-pile Wilton carpeting, while the GT benefited from the addition of an oil temperature gauge to the standard complement.

Driven by the likes of Roy Salvadori, Stirling Moss, Jim Clark, and Innes Ireland, the DB4GT earned its stripes every weekend on the racing circuit. In December 1959, at the Bahamas Speed Week, Stirling Moss won driving a standard customer DB4GT 'borrowed' by the works following the demise of Moss's intended DBR2! The DB4GT was indeed a true dual-purpose car, equally at ease on both the racetrack and Grand Tour.

The DB4GT offered a strong challenge to the prevailing Ferrari dominance in GT racing, enjoying numerous victories. For recognised racing teams, the DB4GT was supplied in lightweight specification. The lightweight version made its debut at Goodwood in 1960, Stirling Moss winning at the wheel of Tommy Sopwith's Team Endeavour entry. John Ogier then ordered two lightweights for his Essex Racing Stable - the famous '17 TVX' and '18 TVX' - both of which enjoyed considerable success driven by some of the greatest drivers of the period. A further six lightweights would be built, including one for Peter Lindner; indeed, the last DB4GT completed was a lightweight.

Aston Martin built a mere 75 DB4GTs (nine to lightweight specification) plus further 19 Zagato-bodied variants, one Bertone-bodied special, and five 'Team' or 'Development Project' cars. Of these 75 examples, 45 were supplied in right-hand drive form and 30 were left-hand drive. Amongst the most beloved of all Astons, the DB4GT remains unmatched for its unique combination of performance and roadability.

The sixth from last DB4GT, chassis number '0169/R' is one of only nine cars completed to lightweight specification by the factory, as evidenced by the accompanying copy guarantee form, which lists the body type as 'Saloon (Lightweight)'. Typically, for the lightweight cars, much of the steel structure in the chassis is perforated, and panels are cut out of the floor and replaced with aluminium. The floor under the fuel tank and rear parcel shelf is made from aluminium, as is the engine bay bulkhead. The glove box lid is deleted and the door panels are simpler, while all the windows aside from the screen are made from Perspex. Mechanically the cars were to standard GT specification but it is certain in the case of one lightweight and probably in others, that the engine was a 'blueprint' built in the Feltham competition department.

Originally finished in Wedgewood Blue with black Connolly leather interior trim, '0169/R' left the factory equipped with two items of non-standard equipment – a heater and glass door windows – to which a Motorola radio was added in April 1962. The car was ordered with Dunlop racing tyres as the purchaser's intention was to race it. Several changes of rear axle ratio are recorded on the guarantee form.

The DB4GT was retailed via Brooklands (HWM) and registered on 17th January 1961 by HWM, who sold the car to Ernest Scragg & Sons Ltd of Macclesfield, Cheshire on 9th February '61. Registered '237 SPL', the DB4GT was raced by Phil Scragg, a circuit-racing star of the early 1950s, who would go on to become even better known as a hill climb exponent during the 1960s. Indeed, '0169/R' had been ordered with the unusually low axle ratio of 4.09:1, almost certainly with hill climbs in mind, which was further lowered to 4.27:1 by the factory in April 1961. The AMOC Register lists three results for Scragg and '0169/R', all in 1961: 2nd at Loton Park; 2nd at the BARC Sprint, Aintree: and 2nd at the BOC's Prescott meeting.

In April 1962 the DB4GT was returned to the factory and fitted with the standard 3.54:1 ratio rear axle. At the same time a radio was fitted and the Perspex wind-up windows replaced with glass. The car's second registered owner, from 9th April '62, was Automatic Laundry Ltd (K C Rothery) of Prenton, Cheshire, as confirmed by the accompanying original buff logbook. The latter records the late Malcolm Cramp as next owner, from April 1965, while the change of registration from 'KCR 123' to 'SCM 971' is dated 24th March '65. Automatic Laundry's acknowledgement letter and sales receipt, made out to Cramp Engineering Co Ltd of Coventry, are on file. Also on file is an illustrated report, compiled in November 2019 by DB4GT authority and co-author of The Aston Martin DB4GT, Stephen Archer, which prospective purchasers are urged to read.

In correspondence with AMOC, Malcolm Cramp advised that '0169/R' had a ZF five-speed gearbox fitted in 1974 in place of the David Brown four-speed; that the axle had been changed again, this time to a 3.77:1 ratio; and that the Borrani wire wheels had been replaced with 15" Cobra wheels (the wheelarches were flared to suit). It is also known that the cylinder head has been changed (but is of correct type), as indicated by the purchase invoice on file. The Borrani wheels are included in the sale.

A hand-written note on file records that the Aston had covered 115,107 miles by 17th April 1991, while there is also correspondence from Aston Martin Works Service regarding an engine rebuild (including conversion to 4.2 litres capacity) undertaken in November 2007, and a bill for fitting an electronic fuel pump in October 2010. The car also comes with its original instruction book containing the owner's detailed notes. During Malcolm Cramp's ownership the car was mainly used to attend AMOC and Prescott events.

In the aforementioned report, Stephen Archer notes that the car has been re-sprayed in what appears to Elusive Blue or similar, and he describes the body as "well used but of great integrity". The front screen is cracked but there is a new-old-stock screen with the car, while the rear window – originally Perspex - is now glass. The rear quarter-lights appear to be the original Perspex items.

All of the extraordinarily well preserved interior appears to be original and is delightfully patinated, with perhaps only some carpets in need of renewal. The door cards are the original lightweight competition type and the glove box lid is correctly absent. The running gear remains to original specification and appears to be serviceable, and the chassis likewise appears to be very sound with only a few patches. When inspected, the engine was started and warmed up; oil pressure is very good and the engine runs smoothly without untoward noises. Clutch action is good but the car has not been test driven and thus is sold strictly as viewed.

Summarising '0169/R', Stephen Archer had this to say: "It would be easy to jump to the conclusion that this car needs a restoration of some magnitude. In truth, this car is an extraordinary example of originality that has been well enough preserved to be mostly retained.

"There have never been any major repairs or restoration carried out and the car's 3 owners has cherished it in a very particular way. With light re-commissioning it can be used as it is. The interior can be preserved and the next owner drive a piece of history that is still an Aston Martin as built by the works.

"It is very rare to see a 1960s Aston in this condition. For it to be a GT is very special and it is a truly unique lightweight DB4GT, there is no other like it."

'0169/R' has also been inspected by renowned Aston Martin specialists, R S Williams; Neil Thompson has confirmed its Lightweight provenance and would be happy to discuss the car with any interested parties.

Despite its tremendous rarity and value, the DB4GT remains a popular entrant at major historic racing events such as the Goodwood Revival and the numerous (and highly competitive) Aston Martin Owners' Club Championship race meetings in the UK. The DB4GT was designed for competition and '0169/R' offers a rare opportunity to acquire an original right-hand drive lightweight capable of competing with distinction in a variety of historic motoring events.

Bonhams would like to thank Stephen Archer and Neil Thompson (R.S Williams) for their invaluable assistance in preparing this description.