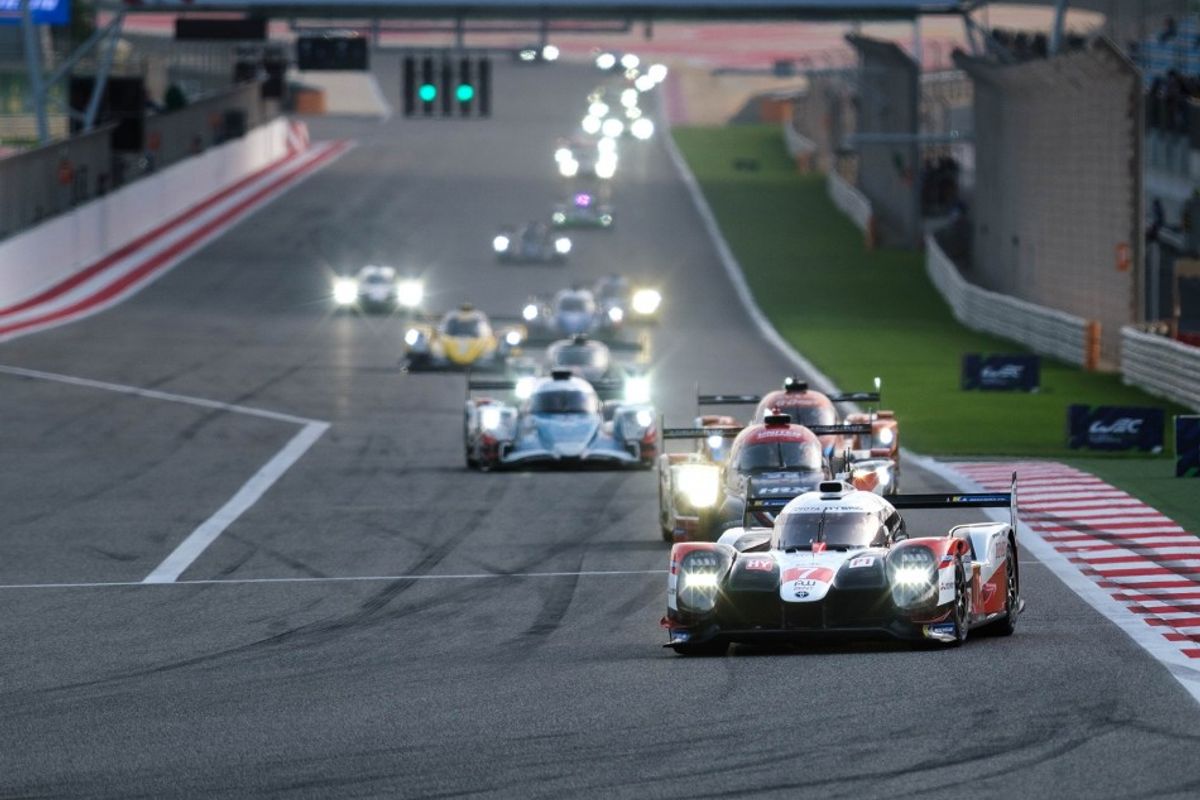 The no7 Toyota Gazoo Racing TS050 Hybrid of Mike Conway, Kamui Kobayashi and Jose Maria Lopez took their second victory of the 2019/20 FIA World Endurance Championship with a dominant win at the Bapco 8 Hours of Bahrain.  The no7 Toyota finished over a lap ahead of their teammates Brendon Hartley, Kazuki Nakajima and Sebastien Buemi and three laps ahead of the third placed no1 Rebellion Racing R13-Gibson.

The race started with pole sitter Bruno Senna in no1 Rebellion Racing R13 being spun around by out of control Team LNT Ginetta of Charlie Robertson.  Senna recovered to third place but both cars suffered minor damage in collision.  The incident handed lead to no7 Toyota TS050 HYBRID of Mike Conway with the no6 Team LNT Ginetta of Mike Simpson in second and chasing down the lead Toyota.

Sebastien Buemi in the no8 Toyota was also caught up in the opening corner incident.  The TS050 suffered front bodywork damage with the front section replaced at first pit stop.  The recovering no5 Ginetta was fifth and fighting back after long pitstop.

At the half way point the race was controlled by No.7 Toyota TS 050 HYBRID driven by Mike Conway while Sebastien Buemi dropped back after the no8 Toyota needed to make a rear-deck change at the scheduled pit stop.  The no5 Team LNT Ginetta retired midway through sixth hour after Jordan King is forced to stop after losing battery voltage. The no6 Ginetta also retired a couple of hours later when Chris Dyson brought the car in with a technical issue.

Victory in the LMGTE Pro class went to Aston Martin Racing with the no95 Vantage of Nicki Thiim and Marco Sorensen finishing ahead of the no71 AF Corse Ferrari of Davide Rigon and Miguel Molina after an epic eight hour long battle between the three manufacturers for the win in Bahrain.  Aston Martin took the last podium position when the no97 Vantage of Max Martin and Alex Lynn finished ahead of the no51 Ferrari of Alessandro Pier Guidi and James Calado.

At the start pole sitter Gianmaria Bruni’s Porsche is hit at first corner by Alessandro Pier Guidi’s AF Corse Ferrari, with Pier Guidi taking lead as a result.  The Italian led the first hour from second Porsche 911 RSR driven by Kevin Estre, with the no95 Aston Martin Racing of Marco Sorensen was third before making a surprise early pit stop to hand over to Nicki Thiim.

As the race progress there was a four way fight for lead as Pier Guidi with the no92 Porsche of Michael Christensen and the two Aston Martins. Pier Guidi managed to break free as the race approached the half way stage after the out of synch no95 Aston Martin pits and Alex Lynn in the no97 Vantage has contact with Racing Team Nederland LMP2 car and loses time.

However, there was disaster for Porsche GT Team as both cars suffered long pit stops with the no92 Porsche 911 RSR dropped out of contention with long pit stop for suspected broken damper and the no91 911 had to stop with right front puncture and drops to fifth in class but ahead of sister car.

In the final hour the no95 was leading with the no71 Ferrari of Miguel Molina challenging hard, but the Spaniard spun the wheels of the Ferrari in the final pitstop and had to serve a penalty.  He rejoined in second place but the no95 Aston Martin now had a free run to the chequered flag.  The final rung of podium was taken by no97 Aston Martin duo of Alex Lynn and Maxime Martin after the no51 AF Corse Ferrari was forced to give up position after fraught battle in which James Calado was judged to have unfairly gained position on Martin by going beyond track limits just after final hour Full Course Yellow was withdrawn.

It was a debut WEC win for United Autosports, with Paul Di Resta, Phil Hanson and Filipe Albuquerque finishing the 8 Hours of Bahrain over 20 seconds ahead of the 4 Hours of Shanghai winning no38 JOTA Oreca-Gibson of Anthony Davidson, Roberto Gonzalez and Antonio Da Costa.

At the start of the race the no22 United Autosports Oreca converted the pole position into the lead of LMP2 as Paul Di Resta headed the no26 G-Drive Racing Aurus 01 of Job Van Uitert.  Di Resta opened up an 18-second gap at front after 60-minutes of racing with Guido Van Der Garde vaulting fellow Dutchman Van Uitert in the no29 Racing Team Nederland Oreca at first scheduled pit stop to take second in class.

The no26 G-Drive Racing Aurus and no37 Jackie Chan DC Racing Oreca were fighting over the remaining podium position in the final stages of the race, with the no37 Oreca getting to the line ahead.

It was all smiles in the Team Project 1 garage as Ben Keating, Larry Ten Voorde and Jeroen Bleekemolen took the LMGTE Am win from pole position, with Ten Voorde and
Bleekemolen claiming the first WEC class win for a Dutch driver.  The no57 Porsche 911 RSR finished 37 seconds ahead of the no98 Aston Martin Vantage of Paul Dalla Lana, Darren Turner and Ross Gunn, with the no86 Gulf Racing Porsche taking third.

At the start Ben Keating headed a Team Project 1 Porsche 1-2 in LMGTE AM and moved ahead of the 11 car field with the no98 Aston Martin Racing Vantage of Paul Dalla Lana in second.  Ross Gunn took over from Dalla Lana and  catches and passes Keating just before second scheduled stop to claim lead. As the race progressed the no86 Gulf Racing Porsche and the no88 Dempsey Proton Racing 911 held the lead.  The no88 Porsche crashed out at Turn 14 as Khaled Al Qubaisi brought out first Full Course Yellow just before four hour mark.

The Team Project 1 Porsche went back into the lead as Larry ten Voorde completed a triple stint at wheel and handed over to Jeroen Bleekemolen.

The no98 Aston Martin Racing Vantage of Darren Turner was running second but was under pressure from the no86 Gulf Racing Porsche driven by Ben Barker. However, Barker had to take a drive-through penalty for unsafe return to track after incident but was still able to bring the car home in third.