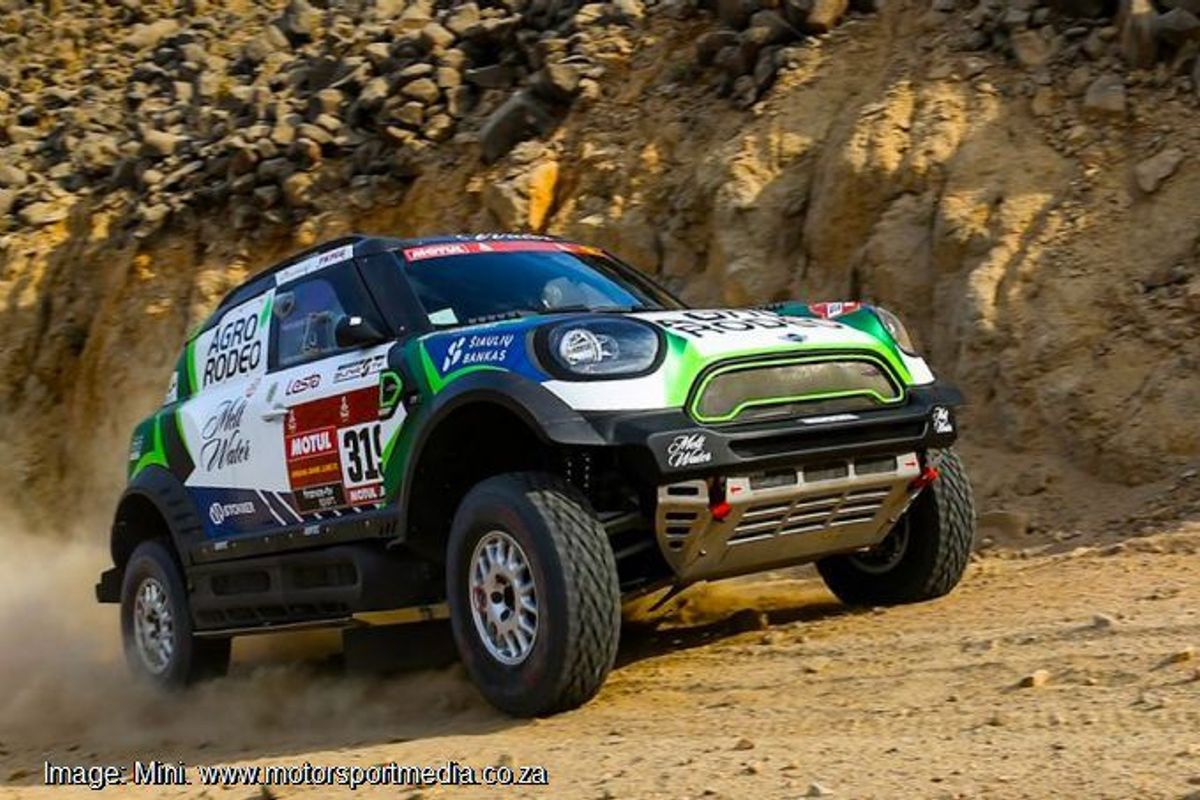 The Dakar Rally entered a new era as the event raced through the Saudi Arabian desert for the first time on Sundays' 319km run along the Red Sea from Jeddah to Al Whjh. The race had already claimed its first victim when former truck racer Martin Kolomy crashed his Ford in Friday’s shakedown and it was not much better for several others as the Dakar claimed more victims on the opening day, but there was no stopping literally unknown Lithuanian Viadotas Zala from taking the car win, while 2019 winner Toby Price won on two wheels.

It was a dramatic day among the cars as Qatari 2019 winner Nasser Al Attiyah made the early running in the lead in his SA-built Toyota Hilux ahead of Spaniard Carlos Sainz Senior’s Mini buggy and Jakub Przygonsk’s AWD Mini, but the Pole was soon in trouble, so Attiyah led by mid distance from a resurgent duo Stephane Peterhansel in the second Mini buggy and Sheik Al Qassimi’s Peugeot, the Minis of Orlando Terrannova and surprise package Viktor Zala’s AWD Mini. Frenchman Mattieu Serradori sat a fine sixth in his SA-built Century Buggy ahead of Bernhard Ten Brinke and Fernando Alonso in two more factory Toyotas, but SA hope Giniel de Villiers was languishing in 14th, suffering no less than four punctures on his Hilux.

Then Al Qassimi emerged in the lead from the fifth waypoint at 254km, ahead of surprise package Zala, Al Attiyah, Terranova and Sainz, before Qassimi was just as quickly gone from the front in a day of punctures and drama, to leave the virtually unknown Zala to come home the shock winner. He ended up two minutes clear of Mini teammates Peterhansel and Sainz, with Nasser Al Attiyah the best of the rest from SA Gazoo Toyota Hilux teammate Bernhard Ten Brinke after the team suffered no less than eleven punctures through the couse of the day.

Perhaps the result of the day from a South African car point of view, was the Johannesburg built and developed Century buggy that came in a brilliant sixth in Serradori's hands, while Fernando Alonso finished his first Dakar stage a troubled 11th, but not quite as tormented as SA Toyota teammate Giniel de Villiers, who lost 23 minutes in his clearly hobbled Hilux. Other cars of SA interest,  the two Red-Lined Nissan Navaras, saw British driver Thomas Bell enjoy a solid run to 35th, while SA pair Hennie de Klerk and Johann Smalberger fought back to 58th after losing an hour at mid distance.

It was a good first day for the other Southern African riders, not least lady rookies Taye Perry and Kirsten Landman who rode their KTMs home 73rd and 95th respectively, no-assistance pair Stuart Gregory (KTM) was 86th and Wessel Bosman (Husqvarna) ended 135th, while Zimbabwe’s Graeme Sharp (KTM), who came in 93rd.

Former winners, Chilean Ignacio Casale and Pole Rafael Sonik topped the quad stage for the day ahead of the Czech Kubeinioa in a Yamaha rout. Unfancied Pole Maciej beat US rider Casey Currie to the Side by Side win, where Zimbabwean Conrad Rautenbach ended eleventh, while SA navigator Mike Horn had been fourth alongside Cyril Despres before the duo hit trouble to lose 50 minutes to drop back and end 20th. There was  almost a turn-up for the books among the trucks too, as Russian Kamaz rookie Andon Shibalov held of Belarusian Siarhei Viazovich (MAZ) and Dutchan Janus van Kasteren's Iveco.

As always, Dakar’s first day was most interesting with the ebb and flow as quicker riders who started a bit further back climb up the order, but Sunday’s result determines Monday's starting order and that will better highlight who’s who, while the cars clearly experienced a tough day as the rapidly changing leaderboard so well proved. It was also a tough day for Jakub Przygonski stuck after Waypoint 3 and multiple Le Mans winner who retired after his RD Limited caught fire 65km into the special. In the bikes, frontrunners Barreda, Short, san Beveren and De Soultrait all lost time on the day, while Frenchman Willie Jobard dropped out of the race.

Tuesday’s second 367km Dakar 2020 day into the deep Arabian Desert from Al Wajh to Neom is the the first part of the Super Marathon stage, which also promises to be a significant navigational challenge.