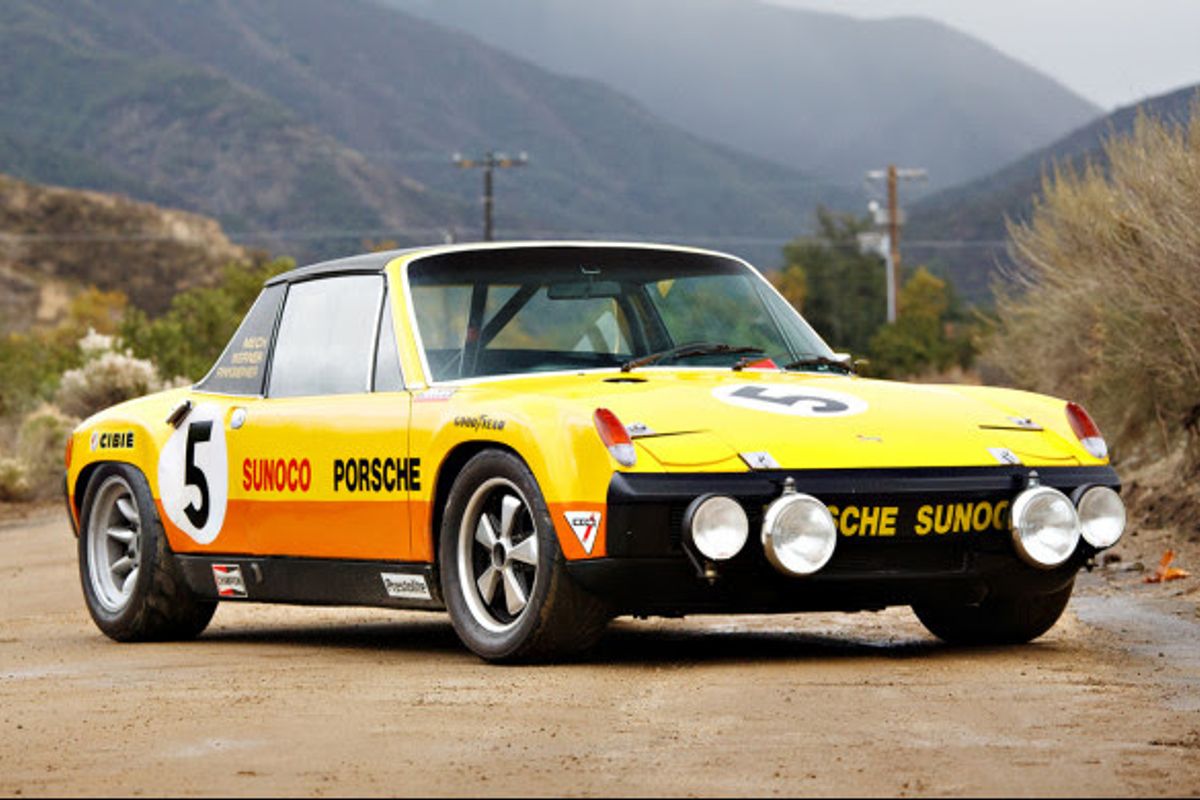 A Genuine Factory-Built 914/6 GT; One of Only 16 Customer Cars for 1970
Delivered New to French Canadian Racing Driver and Journalist Jacques Duval
1st in Class at the 24 Hours of Daytona and 4th in Class at the 12 Hours of Sebring
Well-Documented Provenance Includes Several Noted Porsche Collectors
Faithfully Presented in Original 1971 Sunoco of Canada Racing Livery
Eligible for Leading Historic Events Including Tour Auto and Le Mans Classic

Not long after introducing the mid-engine 914, Porsche began to develop the new car for motor sports. By late 1969, even before the first 914/6s were delivered to customers, the Racing Department had already created a working prototype for a racing version. The result was the 914/6 GT.

Although each individual car was tailored to a specific purpose, almost all 914/6 GTs featured common characteristics: steel fender flares; fiberglass deck lids, bumpers, and rocker panels; ventilated 911 S brakes; front-mounted oil cooler; and wide Fuchs alloy wheels. The cars also benefited from stiffened chassis, uprated suspension components, long-range fuel tanks, and competition-prepared interiors. The two-liter flat-six was available in several states of tune, from a conservative 911 S spec to a full-blown Carrera 6 variant producing 210 hp at 8,000 rpm. Depending on gearing, the 914/6 GT was capable of around 150 mph flat out.

The 914/6 GT officially debuted at the 24 Hours of Le Mans in June 1970, where Guy Chasseuil and Claude Ballot-Lena’s Sonauto entry scored a class win and placed 6th Overall, finishing at an average speed of 99.27 mph – an incredible feat for a two-liter, production-based GT car. Other successes soon followed: in August 1970, the works 914/6 GTs captured a fantastic 1-2-3 finish in the punishing 86-hour Marathon de la Route at the Nürburgring. In 1971, a factory-entered 914/6 GT scored a class win at the Monte Carlo Rally, while in America, Hurley Haywood and Peter Gregg dominated the inaugural IMSA GT championship with their 914/6 GT.

In addition to the limited production of factory-built works and customer 914/6 GTs, many standard 914/6s were converted to GT specifications, either by the factory, dealers, or private customers from Porsche-supplied parts.

The 914/6 GT presented here, chassis 914 043 1017, is one of only 16 examples that the Porsche Racing Department built in 1970 for customer use. Originally invoiced to French importer Sonauto as a standard Light Ivory 914/6, the car remained at the Zuffenhausen factory and was converted to GT specifications similar to Porsche’s own works team cars. As completed, chassis 1017 is an example of the variant three level of the internal “D” sports classification at Porsche – the highest, full-race category for the 914/6 GT. This desirable specification included the most powerful engine available, equipped with twin-plug ignition, Weber 46 IDA carburetors, and 906-type camshafts.

In late 1970, the new 914/6 GT was sold to its first owner Jacques Duval, the celebrated French Canadian journalist and racing driver. Duval began his career in a Porsche 356 Super 90 before upgrading to a Porsche 904, which he raced at Mont-Tremblant, Mosport, and Sebring. For the 1967 season, he bought a 906 and then passed through a succession of racing 911s, which he campaigned in major events including Daytona, Watkins Glen, and the Tour de France. During this period, he usually shared his cars with two drivers: Canadian George Nicholas and American Bob Bailey, who founded B&B Motors and later partnered with Mark Donahue to create Racemark.

When Duval’s 914/6 GT arrived in Canada on January 6, 1971, it was one of the first examples to arrive in North America. The new Porsche, which cost a staggering DM 39,000, had been flown from Germany to Montreal aboard an Air Canada cargo plane. After displaying the car at the Montreal Auto Show and securing sponsorship from Sunoco of Canada, Duval refinished the Porsche in a vibrant lemon orange livery and prepared it for racing, fitting Fuchs wheels up front, Minilites at the rear, and a variety of Cibie lights for nighttime driving.

The Porsche made its competition debut at the 24 Hours of Daytona held on January 30 and 31, 1971. One of four 914/6 GTs entered in the under-two-liter category for grand touring cars, 1017 wore race no. 5 and was driven by Duval, Nicholas, and Bailey. In a race dominated by Porsche and Ferrari prototypes, and ultimately won by Pedro Rodriguez and Jackie Oliver’s Gulf-Wyer 917K, the two-liter 914/6 GT achieved a remarkable result, finishing 1st in Class and 7th Overall.

Following this successful outing, the 914/6 GT next appeared at the 12 Hours of Sebring in March. Despite suffering from throttle cable problems, Duval, Nicholas, and Bailey managed a creditable 4th in Class finish, behind two Porsche 911s and the Brumos 914/6 GT of Gregg and Haywood.

After Sebring, the 914/6 GT returned to Canada and appeared in the 6 Hours of St. Croix, held along the St. Lawrence Seaway near Quebec City. There, following a rainy practice session and a challenging, wet race, the Porsche finished 1st Overall. The final race for 1017 took place at the Carnival at Three Rivers, which featured a 15-lap sprint race as part of the festivities. In its last competitive outing, the Porsche placed 1st in Class and 3rd Overall.

Following its successful racing career, 1017 was sold to Jerry Huffman, a devoted Porsche enthusiast and one-time president of the Potomac Region Porsche Club of America (PCA). During his ownership, the 914/6 GT was detuned for road use, repainted silver, and displayed in the 1974 Porsche Parade.

The car’s next owner, Gary Wigglesworth, had seen 1017 race at Daytona in 1971, and it left a lasting impression, inspiring him to own several 914/6s and 914/6 GTs. After acquiring this car in 1980, he autocrossed it on the national Pro Solo circuit, placing 3rd in the nation in 1988 and 2nd in 1989, while capturing the SCCA Division championships both years. When 1017 was invited to take part in a historic tribute at the 1991 24 Hours of Daytona, Mr. Wigglesworth returned the car to its original Sunoco livery, carefully matching the colors to original sections found on the car.

In the hands of its next owner, Tom Burdge, the 914/6 GT was displayed at Rennsport Reunion III, fittingly held at the Daytona International Speedway. In 2015, while in the ownership of noted restorer and Porsche enthusiast Mark Allin, 1017 was shown at the Amelia Island Concours d’Elegance in a class honoring the Porsche 914.

Today, this factory-built 914/6 GT remains in remarkably correct, original order and, unlike many examples, has a well-established provenance. Its history is further supported by an impressive documentation file, which includes numerous period photographs, magazine articles, the original 1971 Sebring entry form, as well as copies of the original Canadian customs form and 2010 ACCUS Historic Technical Passport.

One of the most rare and desirable production-based Porsche racing cars, 914/6 GTs are widely respected and sought-after by knowledgeable enthusiasts, with most examples now residing in major, world-class Porsche collections.

Not only are these cars highly collectible, they remain competitive in historic racing and are ideal entries into leading events such as Le Mans Classic, Tour Auto, and Rennsport Reunion.

Among the very best of the precious few factory-built 914/6 GTs, with a superb period race record that includes notable results at the 24 Hours of Daytona and the 12 Hours of Sebring, followed by decades of appreciative stewardship in the hands of collectors, 1017 stands today as a singularly important piece of Porsche history – a winning GT machine from the glory days of the factory’s endurance racing program.