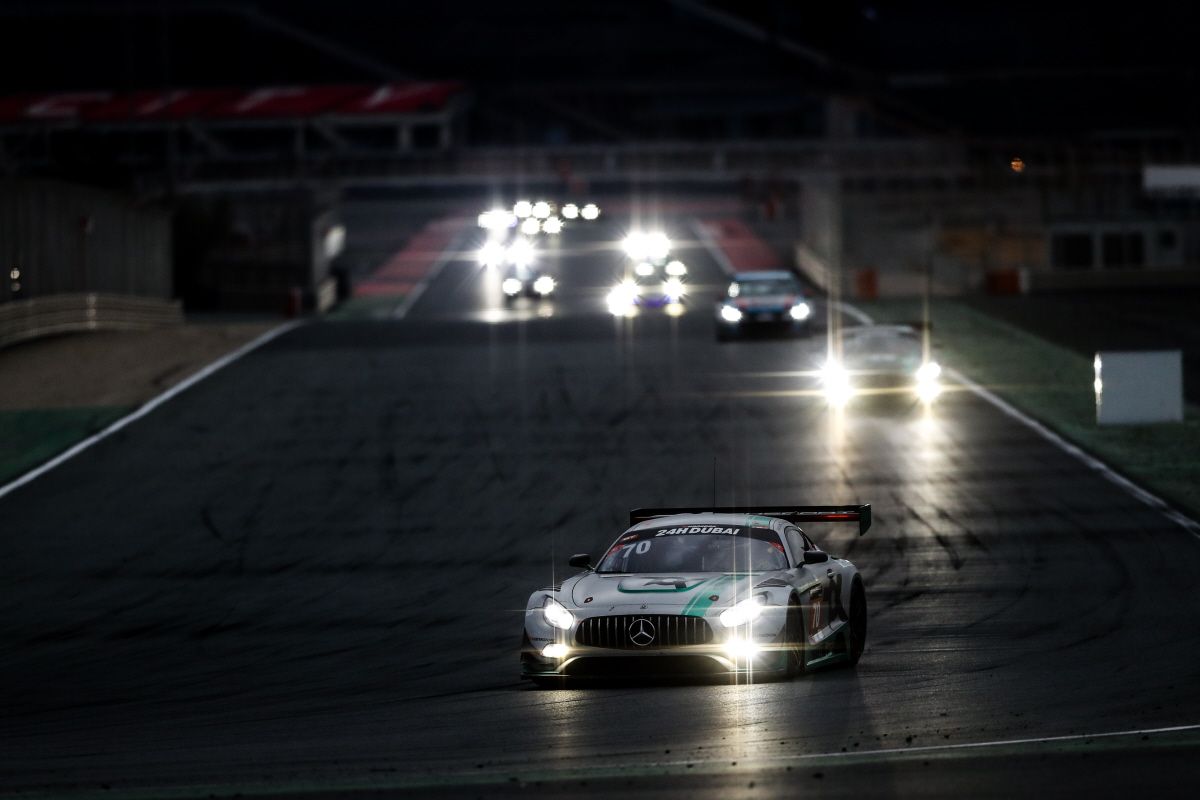 Finlay Hutchison made a highly successful start to the 2020 motorsport season during the weekend’s rain-lashed Hankook 24 Hours of Dubai, the Scottish racer taking second in the GT3-AM class and a strong top 10 finish overall.

Only agreeing an eleventh hour deal to join German squad Toksport WRT mere days before the event, the 20-year-old from Dundee partnered Axcil Jefferies, Alexander Hrachowina, George Kurtz and Martin Konrad in the No.70 Mercedes-AMG GT3.

Qualifying impressively on Thursday, 9th January, with the eighth fastest time overall and second in class, just 0.4 seconds shy of the outright pole position, the quintet went on to perform superbly in the race which began at 15.00 local time on Friday, 10th January. During the opening stint Jefferies made a good start and swiftly moved into the lead of GT3-AM and the overall top six.

Hutchison got behind the wheel of the Mercedes for a double-stint during hours four and five and the Hutchison Technologies, Evoson and In-Home Displays backed driver maintained the team’s push for GT3-AM victory.

As night time arrived, though, rain started to make its presence felt and before long monsoon-like conditions rendered the Dubai Autodrome track undriveable. Before midnight, with Konrad piloting the Mercedes, officials rightly chose to red flag the race on the grounds of safety with much of the circuit becoming completely waterlogged.

Hopes of restarting the race remained but with no improvement in conditions, and after several hours of inactivity, the decision was taken to suspend the race completely and declare a result with the Toksport squad 10th overall and second in GT3-AM.

“I certainly never expected the weather to be how it was, it’s not what you think of when you’re racing somewhere like Dubai!”, said Hutchison, “It’s obviously great to finish on the podium, I’m disappointed there wasn’t more driving time but it’s been a great experience and it’s always good to start the year racing at the Dubai 24 Hours.

“The team ran the ‘AM’ drivers early to get their mandatory driving time completed, the aim was to then push with the Pros later on and challenge for the win. With the downpour, though, that didn't go to plan.”

He added: “I think we could've won the race in our class, we were strong in qualifying and the race was going really well before the red flags. I think the team who won kept an eye on the weather and gambled running Pros earlier, so that gave them an advantage when it did rain. It's been great to work with the Toksport guys and the Mercedes was good to drive, everyone did a great job.”