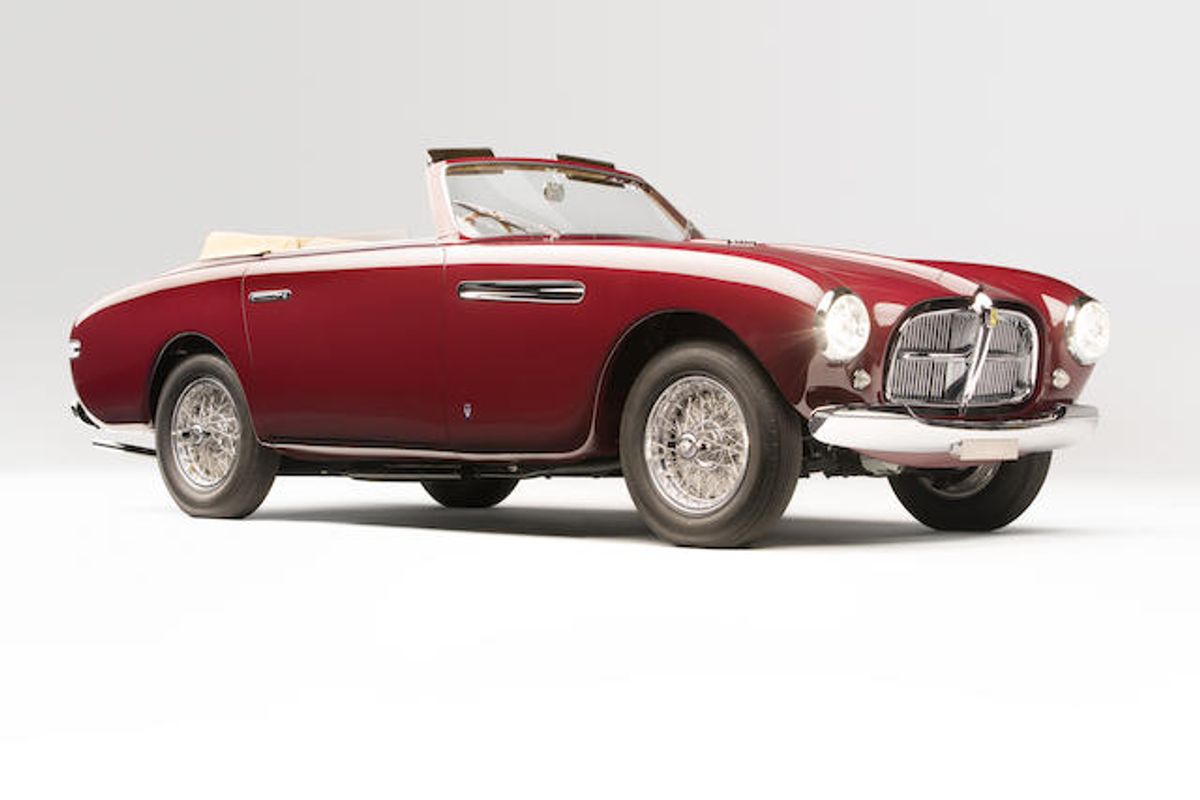 Produced in multiple variations between 1951 and 1952, the 212 achieved significant racing successes but more importantly it put some 110 individual chassis in the hands of clients. The 212 was bodied in a bewildering array of styles from lightweight spiders, coupés and berlinettas to stylish and luxurious cabriolets. Carrozzeria Alfredo Vignale contributed most of the 212's coachwork but the 212 also provided the basis for the first Ferrari by Pinin Farina and important designs by both Touring and Ghia.

Ferrari's original V12 designed by Gioacchino Colombo was only 1.5 liters, just 125cc per cylinder. Its displacement was first expanded to 1,995cc in the Ferrari 166, then to 2,341cc in the 1950. A further increase in the cylinder bore from 65mm to 68mm brought the individual cylinders to 212cc and the engine's displacement to 2,562cc. The chassis was Ferrari's proven design consisting of a double oval tube frame with double wishbones at the front suspended by a transverse leaf spring and a carefully located live rear axle with semi-elliptical leaf springs. The brakes were Ferrari's large hydraulically actuated drums. The transmission was mounted directly behind the engine and had five forward speeds.

There were two basic – but frequently intermingled – distinctions. The Export model, intended for racing on tighter circuits, had a wheelbase of only 2,250mm. The Inter version was typically built on a longer wheelbase chassis in both racing and Gran Turismo guise. Engines were tailored to clients' needs and to the specified coachwork with different tunes and carburation. The engine's elements were refined steadily including introduction during the 212's production of cylinder heads with individual intake ports, bringing the rated power when fitted with three 36mm downdraft Weber carburetors to 170bhp. It was also during the 212's production that the model designation changed, without notice or comment, to 'EU', foreshadowing the 250 Europa that was to follow it.

While often competing against the large displacement Lampredi-engined 340 Mexico, the 212 earned its keep in racing, including first and second place finishes in the 1951 Carrera Panamericana by Piero Taruffi / Luigi Chinetti and Alberto Ascari / Luigi Villoresi. The 212's competitiveness was further demonstrated by the frequency with which their engines were updated by owners, in an effort to keep at bay newer and larger-displacement competitors.

This breathtakingly restored early Ferrari Cabriolet claims a number of noteworthy superlatives, including coachbuilt rarity, a documented history of very few owners, Red Book certification by Ferrari Classiche that verifies the presence of the car's original V-12 engine, and a recent successful visit to the Pebble Beach Concours d'Elegance. Chassis no. 0159 E is approximately the 16th of 78 Inter examples built, and the first of four similarly styled cabriolets bodied by Vignale. The coachbuilder's exquisite design took the 212 Cabriolet to a new level of elegance, with a large open-mouth grille, chromed front fender strakes, and recessed chromed tail lamps. With almost exclusive use of aluminum alloy in the coachwork, the lightweight Inter was also capable of impressive performance.

Built on a 2,500mm wheelbase, this 212 was completed at the factory in October 1951, as photographically depicted in the 2006 book Making a Difference – Coachbuilt Roadgoing Ferraris of the Fifties and Sixties, by marque authorities Angelo Tito Anselmi and Marcel Massini. According to Massini's history of chassis no. 0159 E, the car was dispatched in October 1951 to a dealership in Rome before being sold to the first owner of record, Peter Staehelin, a student in Basel, Switzerland. Staehelin was a co-founder of the Ecurie Espadon race team, which campaigned two Ferrari Formula 2 monopostos.

In 1953, Mr. Staehelin commissioned the factory to upgrade the Inter's motor to a higher state of tune by modifying the one-carburetor intake to a three-carb set-up, which duplicated the competition configuration of the 212 Export variant. The car was spotted and photographed while parked at the XXIII Annual 24-Hours of Le Mans in June 1955, having been driven there by Staehelin.

In December 1960, the opulent Vignale Cabriolet was purchased by a musician in Thalwil, Switzerland, named Mr. Tellenbach. Domiciled for a year or two, the car passed in 1963 to August Zumsteg, a teacher residing in nearby Kaiserstuhl. Following the cancellation of Mr. Zumsteg's registration in January 1969, the 212 was acquired by Rob de la Rive Box, the noted Dutch dealer and automotive writer. Photographs of the car taken during his ownership were eventually published in books by Marcel Massini and Mr. De la Rive Box. Purchased in January 1971 by L.J. Roy Taylor of Shropshire, England, the elegant Inter was registered in the United Kingdom, and when later tested in August 1973 by Woores Garage Ltd. the car still displayed only 69,788 kilometers.

In October 1973 the Ferrari was sold to Charles Gaston Renaud of Cortaillod, Switzerland, a former Bugatti privateer racer and friend of the first owner, Mr. Staehelin. Mr. Renaud owned the car for several decades, and it was featured in an article about his collection in the December 1999 issue of the French magazine Automobiles Classiques. In 2002 the owner began to disassemble the cabriolet for restoration, but he unfortunately passed away four years later with the refurbishment still underway, and 0159 E was domiciled within his estate until 2012.

When the rare cabriolet was acquired then by renowned Ferrari collector, judge and restorer Mr. Heinrich Kämpfer of Seengen, Switzerland, the odometer still displayed just 71,628 kilometers, which are believed to be original. Seeking to confirm 0159 E's provenance and originality, Mr. Kämpfer contacted the Ferrari factory regarding production records and received an email from Ferrari Classiche's Marco Arrighi that engine internal no. 72 corresponded with the car's original V-12 motor. In October 2012, the Inter was submitted to Sahli Karrosserie in Zurich to receive a new paint finish in the original color of Rosso Bordeaux, and a fully invoiced and photo-documented mechanical and interior restoration was also undertaken. Completed in spring 2014, this work resulted in outstanding factory-correct detail and properly performing systems.

Following the factory issuance of prestigious Ferrari Classiche Red Book certification in April 2014, 0159 E was accepted and presented in August at the 2014 Pebble Beach Concours d'Elegance, where it was awarded second-place in its class. Of great note is the fact that the class winner, chassis no. 0402 AM (the Scaglietti-bodied 375MM originally owned by film director Roberto Rossellini), eventually won Best of Show, making the cabriolet's second-place award a particularly honorable mention.

Since 2015, 0159 E has formed part of a prominent North American collection of some of the most important pre- and post-war sports cars known to mankind, while receiving devoted maintenance and detailing. The rare Ferrari was shown at the 2017 Cavallino Classic event in Palm Beach, Florida, where it was admired by the scrutinizing judges.

Still displaying the immaculate benefits of the comprehensive restoration, chassis no. 0159 E is an exquisite postwar Ferrari with exceedingly rare coachwork (the first of four Vignale Cabriolets, and the only one to feature the elegant chromed fender strakes). It is accompanied by factory certification, books and tools, and numerous photographs (including period images taken at the Vignale factory upon its completion, and over 2,200 restoration photos). A sensational example of the early luxury roadcars that Maranello was marketing to support its legendary racing efforts, this superb 212 Inter would crown nearly any collection of Ferrari roadcars, and would make an ideal acquisition for any discerning Italian sports car aficionado.