Gooding's Passion of a Lifetime auction – A Masterpiece Collection 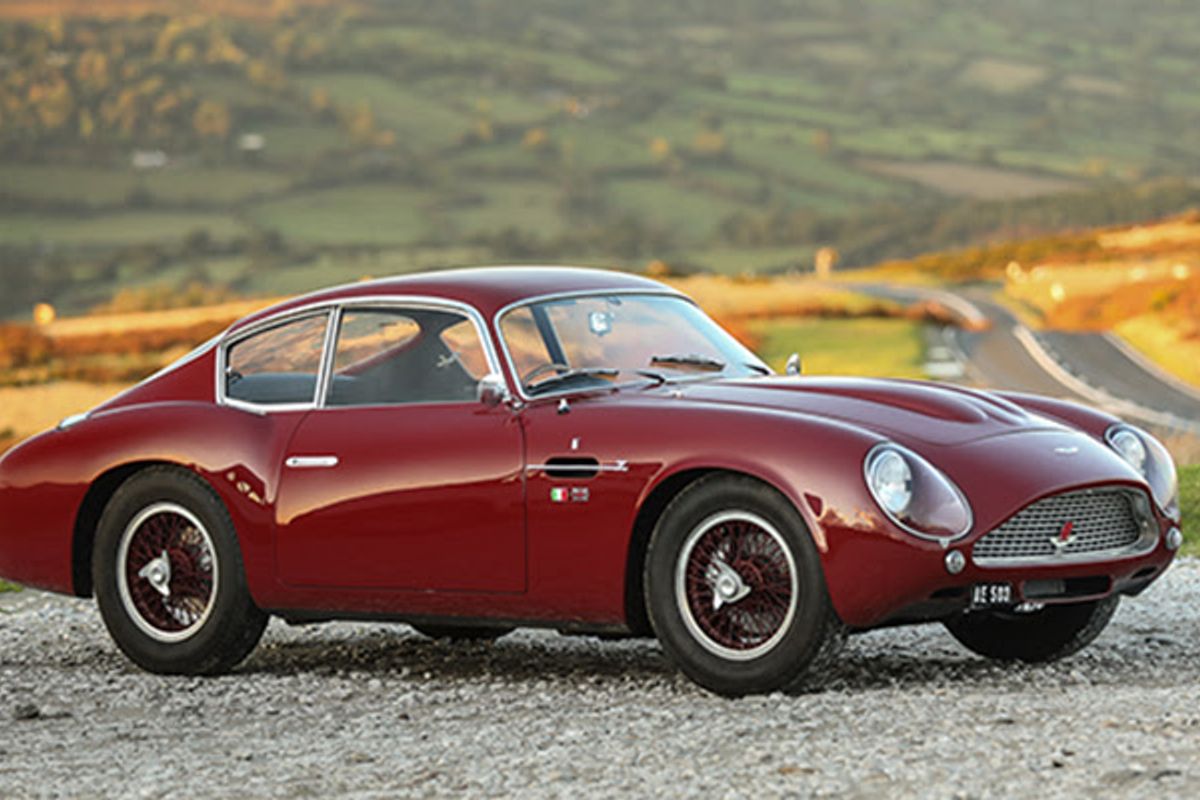 The automobiles offered represent some of the finest examples in existence, with highlights from
Aston Martin, Bentley, Bugatti, Lancia, Lamborghini, Rolls-Royce, and Vauxhall.

Gooding & Co has revealed the automobiles comprising the company’s first-ever London sale, “Passion of a Lifetime,” at Somerset House in central London on 1 April 2020. These stunning cars hail from one of the world’s most revered private collections and represent the culmination of decades of research, dedication, and a meticulous commitment to bring together the most coveted and valuable examples of European sports and racing automobiles of the 20th century. The company’s reputation for the highest-quality offerings at the pinnacle of the collector car business is in perfect harmony with this unmatched collection. Joining the auction stage will be celebrated auctioneer Charlie Ross, who brings his charismatic British charm to every Gooding & Company auction event.

“Since Gooding & Company’s first event, I have been asked about conducting an auction outside the United States, and I have always said that it would have to be for an exceptional group of cars,” states Gooding & Company President and Founder, David Gooding. “I can proudly say this is that collection; containing some of the rarest European marques in existence, this is a once in a lifetime opportunity. As a passionate automobile enthusiast, this sale is sure to be an unforgettable experience for myself, collectors, and car devotees around the world.”

This meticulously curated collection presents three iconic Aston Martins; each having left its own unmistakable imprint on the manufacturer’s rich history. The 1961 Aston Martin DB4 GT Zagato (Estimate: £7,000,000 - £9,000,000) is among the most desirable of all Aston Martin road-going cars, and while the DB4 GTs are highly sought after, those dressed in the exotic Zagato coachwork like chassis 0176/R presented here, are regarded among the most beautiful sports cars of their era. Of the 19 DB4 GT Zagatos built, 0176/R is the sole example finished in Peony Red and is considered to be one of the very best, most original DB GT Zagatos in existence.

The DB3S was introduced in 1953 as the successor to the DB3 and featured a twin-cam, straight-six engine and elegant Frank Feeley-designed bodywork.
DB3S/102 was ordered new by the Kangaroo Stable, an Australian racing team led by David McKay and Tony Gaze. As the team’s lead car, chassis 102 raced around the world at various competitions up until 1960. More notably, this DBS3 set a new Australian Land Speed Record in 1957, averaging 143.19 mph.
This beautiful Aston Martin competition car has been painstakingly restored, successfully campaigned in numerous historic events, and is accompanied by its original engine.

Of the 21 Ulster customer cars produced, this example is surely the most famous and recognizable.
Delivered new to Prince Bira and Chula of Siam, the Ulster was added to the royal’s legendary White Mouse Stable, where it competed in the 1935 Tourist Trophy.

This Ulster hails from well-documented provenance with just two private owners since 1949. It has been authentically restored by Ecurie Bertelli and is offered with an extensive history file, as well as its original engine and scuttle bodywork.

When the R-Type Continental Fastback was revealed in 1952, it was the world’s most expensive production car ever, and with a top speed of 120 mph, it became the fastest genuine four-seater available.
This R-Type Continental was one of five built to order for Briggs Cunningham’s racing crew chief, Alfred Momo, and first owned by American sportsman Charles Moran Jr. –the first American to race at the 24 Hours of Le Mans.
A definitive example of the most desirable prewar Bentley model, this R-Type Continental Fastback has been methodically maintained and has proven itself on many long-distance European tours.

The gorgeous Vanvooren cabriolet is without question one of the most desirable of all 4 1/4 Litre Bentleys built on the overdrive chassis.
In the current owner’s possession, the Vanvooren Cabriolet was refinished in two shades of blue to emphasize its beautiful aesthetic while celebrating the car’s important French heritage.
This striking Bentley is ideal to compete at any Concours d’Elegance, combining the ultimate 4 1/4 Litre chassis with timeless Parisian coachwork.

The Bentley 3 Litre was the first car produced by W.O. Bentley and initially announced and displayed at the 1919 Olympia Motor Show. It featured an advanced inline four-cylinder engine with hemispherical combustion chambers, twin-plug ignition, and an overhead camshaft operating four valves per cylinder.
This Bentley is an original Red Label Speed Model with Vanden Plas Sports bodywork.
This Bentley comes from well-documented provenance that started with C.E. Tongue and continued for 30 years in the hands of George W. Bennet, a founding member of the Bentley Drivers Club.
Recently restored to show-quality by internationally acclaimed Bentley specialist R.C. Moss, this gorgeous Tourer will undoubtedly excite enthusiasts of prewar automobiles.

The famous Bugatti marque has offered a countless number of everlasting examples, but the treble of prewar masterpieces in this collection compete in a class of their own, beginning with the incredible King Leopold 1934 Bugatti Type 59 Sports (Estimate: In Excess of £10,000,000). Considered by historians to be the ultimate Bugatti Grand Prix car, the fabled Type 59 is both a technical marvel and the most elegant prewar racing car ever to grace the track. Mostly driven by René Dreyfus during the 1934-35 season, this car was initially a part of the Bugatti works Grand Prix team during which it achieved an outright win at the Belgian Grand Prix at Spa as well as a 3rd Place finish at the Monaco Grand Prix. Shortly after, the Type 59 was developed by the factory for sports car events by modifying the chassis and bodywork. The Type 59 Sports earned enormous success during the 1937 season, dominating its rivals along the way.

Collectively through its racing years, this Bugatti has been driven by some of the most famous and accomplished names of the era starring Robert Benoist, Louis Chiron René Dreyfus, Piero Taruffi, Achille Varzi, and Jean-Pierre Wimille. In total, this Type 59 Sports participated in an incredible number of Grand Prix and major races across Europe with several victories and pole finishes before ultimately retiring from the sport in 1937. In 1938, the car was repainted black by the factory and sold to King Leopold III of Belgium, an important patron of the marque. To this day, it remains in outstanding unrestored condition, appearing as it did in King Leopold III’s possession. With Royal provenance and exceptional, unrestored condition, 57248 is widely regarded as the most significant and original competition Bugatti.

Bugatti’s two-liter, eight-cylinder Type 35C is one of the finest racing cars of its period and largely viewed to be one of the most enduring designs of all time.
Chassis 4871 was originally built as a factory works car for the 1928 Targa Florio.
Driven by its first private owner, Jannine Jennky to an overall win at the inaugural Coupe de Bourgogne, and later, this Type 35C raced in Grand Prix events throughout Europe.
This Bugatti has been carefully preserved in unrestored condition, with just four owners since 1932.

The Lamborghini Miura P400 SV Speciale is among the most celebrated supercars ever made, and with only 150 P400 SVs constructed.
Built to special order for devoted customer and French industrialist Jacques Dembiermont with specific mechanical requirements for his engine – the experimental dry sump lubrication and a ZF limited-slip differential.
Following notable owners from around Europe, this special Miura was sold to its current owner who had it carefully restored by two leading Italian Lamborghini experts, Carrozzeria Autosport and Top Motors.
This Speciale is largely considered to be one of the most extraordinary Lamborghinis of all time.

Exceedingly rare, technically innovative, and strikingly stylish, the 350 GT is celebrated as one of the most outstanding Italian GT cars of the 1960s, often representing the Italian company’s first great achievement in the automotive world.
Chassis 0226 has been under its current ownership for over 20 years and has enjoyed many long-distance tours as well as a thorough cosmetic restoration by Italian marque specialists Bacchelli & Villa, with mechanical work completed by Top Motors and Markus Scharnhorst.

The Lancia Aurelia introduced several pioneering features including a rear-mounted transaxle, four-wheel independent suspension, and inboard rear brakes.
Its Pinin Farina design was highly influenced by American dream cars of the era and featured appealing lines, split bumpers, and a fashionable panoramic windscreen.
This rare, left-hand-drive B24S is especially notable for being one of the few left-hand-drives delivered to a European customer rather than an American.

Unveiled in 1922, this revolutionary new automobile would later become Vincenzo Lancia’s greatest masterpiece and the mechanical expression of perfection.
The Lambda 3rd Series Torpédo is among the most technically advanced cars of its era with notable firsts that include independent sliding pillar, and a narrow-angle V4 engine.
Provenance includes noted Lancia enthusiasts Anthony MacLean and more recently Lukas Hüni, who commissioned a complete restoration to the highest standards, preserving original details and finishes wherever possible.

This incredible Silver Ghost, chassis 24LW, is a premier example of the in-demand Alpine Eagle and was delivered new to a prominent Uruguayan politician, winemaker, and ambassador to the Holy See in the Vatican.
24LW is specially equipped with an optional short-throw gearbox, D-type steering rake, nickel fittings, and French chassis plate.
The current caretaker treated the Silver Ghost to a show-quality restoration by P&A Wood, bringing it up to the standards that earned Rolls-Royce’s reputation as “the best car in the world.”

The first car to don the Vauxhall name arrived in 1903, though its history can be traced back to 1857 when Scottish engineer Alexander Wilson founded a firm specializing in marine engines at the Vauxhall Iron Works.
The 30-98 was recognized at the time to be England’s finest high-performance car and in 1922 the original E-Type 30-98 was updated and renamed OE-Type. The Vauxhall here is just one of approximately 12 examples supplied with ultra-sporting Wensum coachwork.
Formally owned by well-known collectors Jack Broadhead and Reg Parker, this Vauxhall 30-98 OE-Type is one of the finest surviving examples of the legendary marque.

Gooding & Company at Rétromobile 2020
Gooding & Company is thrilled to offer an exclusive first look at a selection from the “Passion of a Lifetime” sale at the 2020 Salon Rétromobile from 5 February to 9 February at the Paris Expo Porte de Versailles. On exhibition during the premier automobile show will be the 1934 Bugatti Type 59 Sports, the 1961 Aston Martin DB4 GT Zagato, and the 1971 Lamborghini Miura P400 SV Speciale.

Click here for the 'A Trio of Bugattis at Speed' video