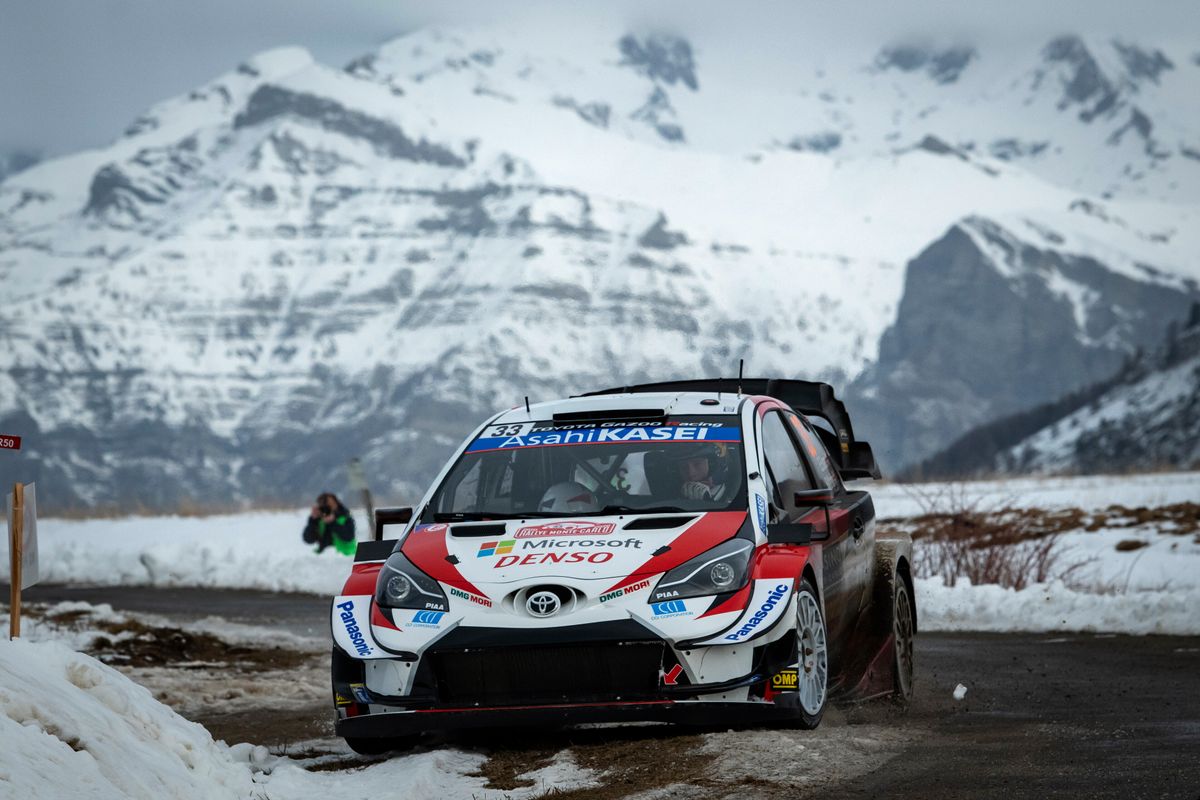 Elfyn Evans finished Saturday’s penultimate leg of Rallye Monte-Carlo with a narrow lead after a gripping see-saw battle with team-mate Sébastien Ogier in the French Alps.

The Toyota Yaris debutants swapped the lead on three occasions before Evans ended with a 4.9sec advantage over Ogier, with Thierry Neuville hot on their heels in his Hyundai i20.

Neuville won three of the day’s four speed tests and is only 1.5sec further back, leaving this opening round of the FIA World Rally Championship poised on a knife-edge ahead of tomorrow’s closing leg in the mountains above Monaco.

Studded winter tyres were essential for this morning’s two special stages which contained lengthy sections of snow and ice. Overnight leader Ogier stretched his advantage in the first, before Evans struck back to lead at the mid-leg service.

Rising temperatures ensured drier afternoon conditions when the two stages were repeated. The pair were tied after the first, with Ogier ahead on a tiebreak, before Evans fought back to snatch the lead for the third time in the rally.

The Welshman admitted he had a close escape after flirting with a ditch in the final stage.

“On the last corner of ice on the stage I decided to be a little optimistic with the throttle and off she went. I definitely used my lucky card for the weekend - it was a good job there was nothing in the ditch,” he said.

Ogier admitted a safety-first approach cost the lead. “I was a bit cautious in the last stage and I lost too much, but the gap is still very close and it’s a simple reset for tomorrow. We still have the chance to win,” he said.

Neuville was happier with the last-minute information provided by his safety note crew, which drives the stages a couple of hours before competitors to provide condition updates.

“We’re still in the fight for the win which is positive and we’re pleased with the performance today. We’ve had improvements in the corrections to our ice notes and that provided us with more confidence during the day,” said the Belgian.

Sébastien Loeb was fourth in another i20, more than two minutes further back, after swiping a bank this morning and spinning this afternoon. His errors allowed Esapekka Lappi to close to within 14.1sec in his Ford Fiesta.

Kalle Rovanperä was an untroubled sixth in another Yaris, ahead of Takamoto Katsuta who
spun this morning. WRC 3 leader Eric Camilli was eighth, ahead of WRC 2 frontrunner Mads Østberg and Nicolas Ciamin.

Sunday’s finale is based in the Alpes-Maritimes mountains above Monaco. It features two passes of two stages, covering 63.54km, and includes the legendary crossing of the Col Turini. The afternoon finish takes place against the backdrop of Monaco’s famous harbour.