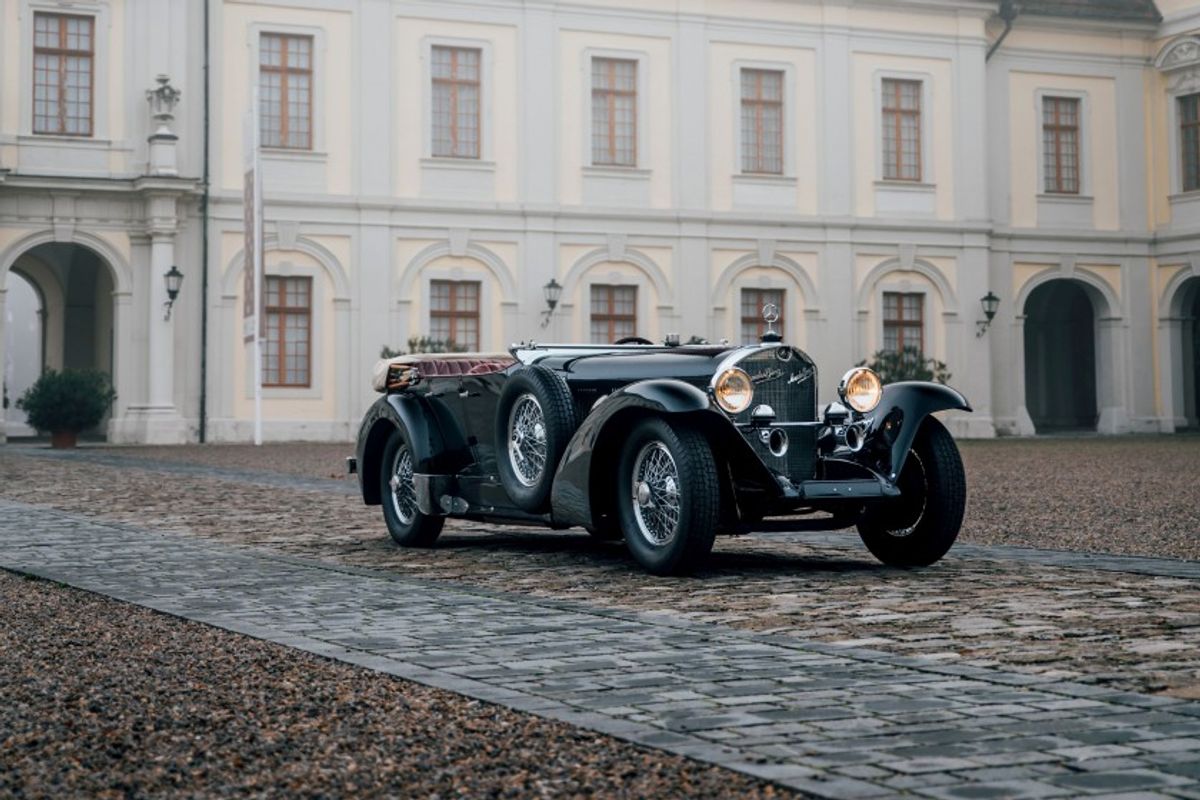 The rare Mercedes 710 SS was one of the most prestigious models to be built by the marque. This example, chassis 36223, was an order placed by Mercedes-Benz New York, as recorded in the manufacturer's books on 28 April 1929 (a copy of this document is in the file). Several months later, on 30 October 1929, it left the factory and was sent to New York as a rolling chassis, and would have been exhibited on the Mercedes stand at the 1930 New York National Automobile Show. There are unusual chrome parts on the chassis that would confirm it to be the one on display.

This chassis was then ordered by the Import Company of New York, in January 1931. On an old, poor-quality copy of a Mercedes-Benz document (reproduced in the certification), one can make out " Import " (this document is difficult to read but it appears also to say 1932). We are therefore in no doubt that the chassis was sent to France after the New York Motor Show, to be bodied by Howard " Dutch " Darrin. Based in Paris, and associated with Thomas Hibbard until 1931, Darrin went on to set up the company Fernandez & Darrin in 1932 with the businessman Jino Fernandez. Fernandez had a showroom on the Champs-Élysées, and a coachbuilding workshop in Boulogne where he built bodywork for certain manufacturers and importers. His association with Darrin allowed him to expand this activity and respond to orders from wealthy Americans.
Looking at the spectacular and very specific styling of the wings, it is clear this coachwork carries Darrin's signature, already seen on Hispano-Suizas and Duesenbergs. Having studied various texts and particular elements of the distinctive design, all the evidence points to this car being attributed to Fernandez & Darrin. Howard 'Dutch' Darrin, with some of the most prominent and wealthy clients around, originated from the US and continued to have close ties there.

The Mercedes was given a highly elegant Sport Tourer body with enveloping wings. The sporting attributes of this luxurious chassis were prominent, such as the two chrome horns framing the front grille and the chrome exhausts emerging from the lengthy bonnet. Presented in white with a red leather interior, this Mercedes 710 SS was then delivered to its first owner, Mr. Martin from Washington DC. There is a photo from this period showing the car in its white livery with whitewall tyres. We don't know who Mr Martin sold the car to, but we discover it shortly afterwards in the hands of Mr Merritt, who in turn passed it on to Dr Scher. The car was then acquired by Dr Bissell and, in August 1956, by Mr Pitcairn. He decided to restore it, and took this opportunity to change the colour, repainting it black. Once the work was completed in 1957, he participated in various American Concours d'Elégance events. A copy of the original order from Mercedes mentions that, in October 1970, the car still belonged to Mr Pitcairn, based in Bryn Athyn, in Pennsylvania. This same document also states that in November 1977, Graf Clery, director of Mercedes-Benz of North America, asked for information on the car from the Daimler archives.

Ten years later, in 1987, this Mercedes SS appeared in a photograph for an article about pre-war Mercedes, published in number 3 of the Automobile Quarterly. Apart from the colour, the car is identical to the earliest known photograph, and was still sporting its whitewall tyres.

In the May 1993 edition of Classic & Sports Car magazine, there is an advert for "The Checkered Flag" (William Kontes), a dealer from New Jersey, advertising this car. The photos clearly show this Mercedes 710 SS with its distinctive coachwork and the ad mentions chassis number 36223 and engine number 72182. In 2009, it was acquired by a German buyer, and sent directly to Mercedes-Benz Klassik Center, in Stuttgart, for an inspection to establish its authenticity.

The important and thorough certification by Mercedes-Benz Klassik concluded that the car is indeed a Mercedes 710 SS and all the components correspond to those of an SS. The report points out a difference in the number stamped on the engine, 72181, to the 72182 shown on the chassis plate. However, another inspection report, carried out on 6 June 2013 by the German certification body TÜV Süd, points out that the " 1 ", the final digit of the engine number, could have been re-stamped over the original " 2 ". Notably, the engine was totally rebuilt in 2016/2017 and has covered just around 50 km since. Several tests have confirmed the impeccable running of this engine. It must also be noted that the braking system was converted at some point in the past into a hydraulic circuit, a clear improvement in terms of control and safety.

This is without a doubt one of the most extraordinary models ever produced by the marque, a genuine Mercedes 710 SS (type W06). Its six-cylinder in-line engine has a displacement of 7 065 cc, developing 140 bhp at 3 200 rpm, increasing to 200 bhp once the supercharger is engaged. This allows a top speed of around 200 km/h, a privilege reserved for a select few sports cars. Moreover, the SSK and SSKL competition versions of the model achieved some outstanding victories in the hands of legendary drivers such as Rudolf Caracciola or Manfred von Brauschitsch, winning the 1931 Mille Miglia and numerous hillclimbs including Mont Ventoux. The Mercedes SS was also extremely successful as a tourer. With its factory body, or as here, designed by a coachbuilder, the car made its presence felt at all the top Concours d'Elégance. It was also capable of crossing the Alps, a challenge made easy by its powerful engine and high levels of comfort. There were only 111 examples of this model built with just a handful surviving today.

This Mercedes 710 SS therefore represents the very best of its day, from the streamlined, sporty styling to its powerful, sophisticated engineering. Presented in black, with nicely patinated red leather interior and comprehensively equipped dashboard, this work of art will be welcomed in the most prestigious historic meetings and Concours d'Elégance events, where it is ready to shine as brightly as the star on its bonnet, highlighting the exceptional status of this superb machine.

Participating in the auction on this lot is subject to a special registration process. If you would like to bid on this lot, please get in touch with the bidding office or the motorcars department at least 48 hours before the sale