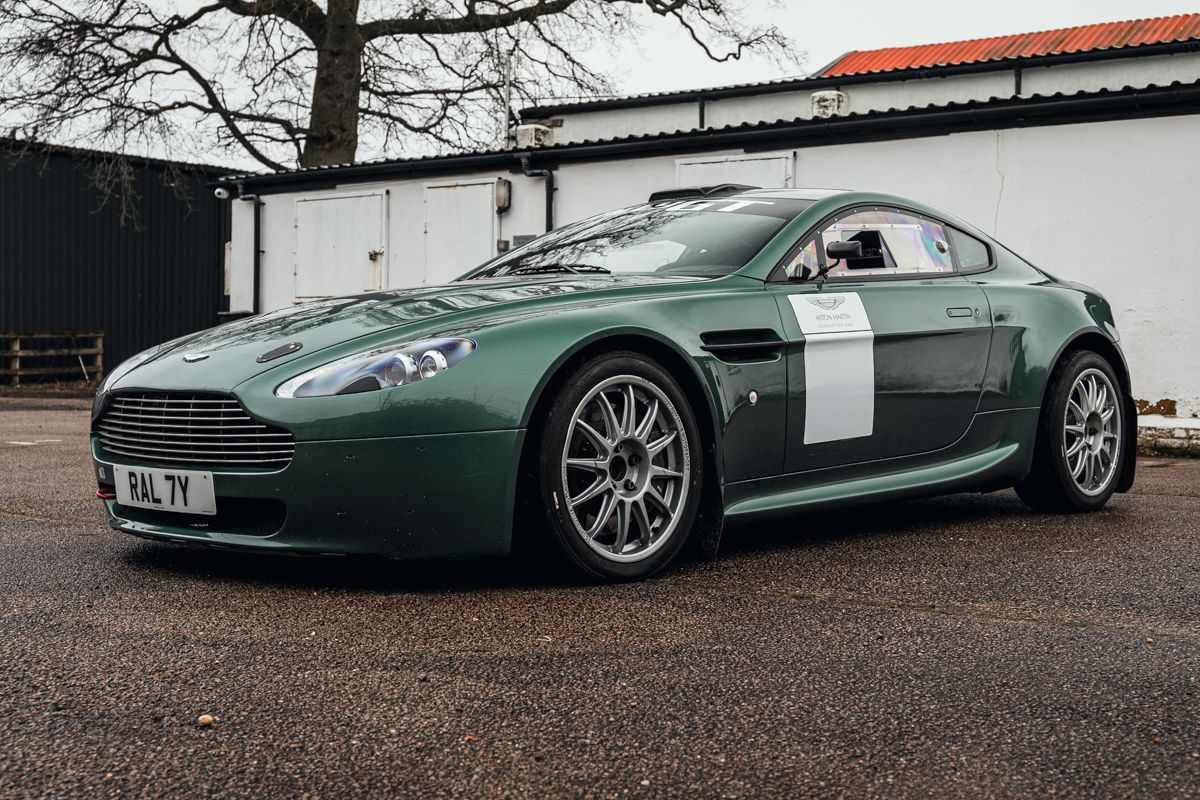 Two very special lots will be going under the hammer at Silverstone Auctions Race Retro sale on the 21st and 22nd February. A pair of rally prepared Aston Martins and two Invictus Games Jaguar F-Types.

Both lots are very unusual and very exciting as it offers any potential purchaser the chance to own rare and also unique competition cars.

Lot 213 is our first pairing, the Aston Martin Vantage GT Rally cars prepared by Prodrive. Built during Prodrive’s V8 Vantage production of the GT2, GT3 and GT4, they investigated the possibility of rallying a Vantage and built just four of these cars.

Two of these cars ended up in private hands and were entrusted by the current owner to Aston Martin race preparation specialist David Appleby Engineering where they maintained and had great success.

R4L 7Y is a complete car but hasn’t seen action for some time and will therefore require recommissioning. It is a potent force with a suggested 420bhp a Hewland six-speed sequential gearbox with upgraded Prodrive WRC brakes.

OU06 ETJ was being prepared for the European Rally class and will require completion as it has been partially stripped. It comes with all the necessary parts in order to be rally ready.

By offering both cars as one Lot, potential buyers will also gain a significant spares package, which, according to the vendor includes approximately 50 wheels and tyres, three Hewland sequential gearboxes and many other parts.

These two Aston Martin Rally cars provide a very rare and exciting opportunity. When completed they will almost certainly attract attention and invitations. Due to family illnesses, they are now being offered at auction with a very reasonable estimate of £90,000 to £110,000. This is a very tempting prospect.

Our next Lot, 226, is a pair of unique Jaguar F-Type SVR GT4 race cars and spares package. This is one amazing story.

Invictus Games was created by Prince Harry, The Duke of Sussex as an international adaptive multi-sport event for wounded, injured or sick armed services personnel. In 2018 Invictus Racing was set up to offer those in the armed forces who had suffered, the opportunity to compete in the 2018-19 British GT Championship.

To make this happen James Holder, co-founder of the clothing brand Superdry, the Invictus Games Foundation and Jaguar’s Special Vehicle Operations department collaborated to create a race team using two specially developed F-Types. The team was to be run by the very successful David Appleby Engineering.

2018 was a very steep learning curve in the very competitive British GT Championship and 2019 the rewards came with GT4 Pro/Am class wins at Oulton Park in races 1 and 2, and 2nd at Snetterton and Spa.

Both cars were campaigned in 2018 and in 2019 the attention was focused on the one car with the other being used for testing purposes.

Estimated at £200,000 to £250,000 for two GT race cars, including an extensive spares package, is a very exciting prospect, bearing in mind a huge amount of expense far above the estimate has been put into this extremely special and unique project.

The story behind it speaks for itself.

Harry Whale Silverstone Auctions Sales Manager commented: “Both these lots are really special, and we are very honoured to have been chosen to offer the Invictus Games Racing F-Types.”

“The Aston Martin Rally cars are so rare and the only two in the UK. These present as a unique opportunity to go rallying in something that you would never have imagined take to the forest stages of Wales.”

“We are all very appreciative of our armed forces and what they do for our country and the sacrifices they give. The Invictus Games Foundation is an amazing initiative and these cars and the team, offered a wonderful opportunity for our servicemen to compete in one of top GT categories.”

“Any interested parties in either of these lots are encouraged to contact us as there is so much more information on the cars than is possible to describe.”

The two-day auction will be preceded with an automobilia sale offering a selection of watches, signed prints, books, luggage and other items of automobilia.