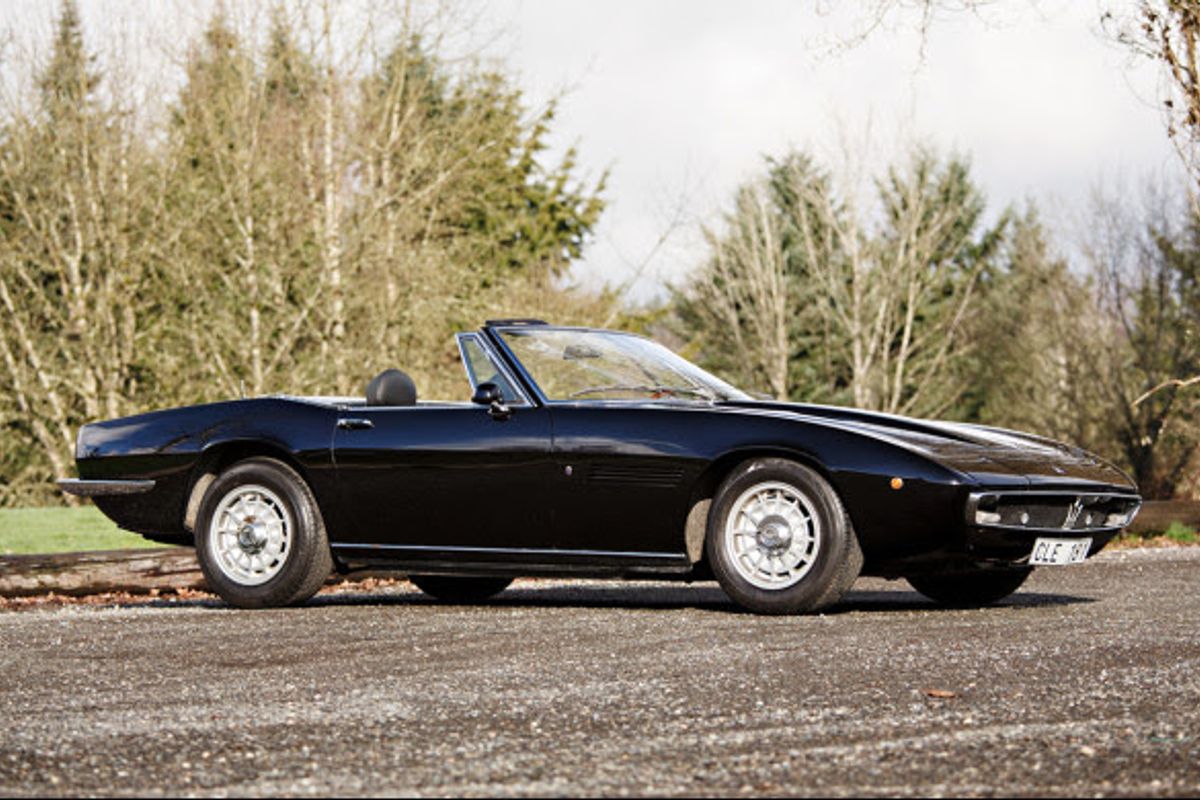 Introduced in 1966 at the Torino Motor Show, the Maserati Ghibli was an immediate sensation, hailed as one of Italy’s most exciting new offerings. The Ghibli was a masterpiece of automotive design, owing its genius to Ghia head stylist Giorgetto Giugiaro. The long, low razor-edge sports car had a refined yet brutal appearance. With a four-cam, dry sump V-8 engine and a top speed in excess of 160 mph, the Ghibli was among the fastest production cars of its day.

In 1969, Maserati unveiled the elegant Ghibli Spider, for which Giugiaro received more acclaim. The following year, Maserati offered the 4.9 SS variant that produced 335 hp – an increase of 25 hp over the original 4.7-liter engine. As a result, the 4.9 SS could reach 100 mph in a staggering 16 seconds and claimed a top speed of 170 mph. Maserati justifiably described their car as “powerful and ultra fast, smooth and dependable, modern and efficient.”

The Ghibli Spider, like most exclusive open sports cars, was aimed at the all-important North American market. Of the 128 Ghibli Spiders built by the factory, 70 were originally destined for the US. Of the 30 4.9 SS Spiders that were sold new in the US, 24 examples were equipped from the factory with the desirable ZF five-speed manual gearbox, while the remaining six received BorgWarner automatic transmissions.

The manufacturer’s certificate of origin was issued on December 7, 1971, and, in January 1972, the Ghibli Spider was shipped by boat to the US and then delivered to Grossman Motor Car Corporation, the official Maserati dealer located in West Nyack, New York.

On April 28, 1972, the 4.9 SS was delivered to its first private owner, Irene Young of Westport, Connecticut. Although factory records document service work carried out by Grossman through fall 1972, little else is known about the car’s earliest history. In 1987, Florida-based exotic car dealer Ed Waterman acquired the gold Ghibli Spider, then showing about 54,000 miles, in a package of cars sourced by Bruce Haley of New Jersey. The Maserati was then sold to Midvo Leasing Inc. of Worthington, Ohio, and remained in the US through the early 1990s.

By spring 1993, the Ghibli Spider had been sold to Swedish Maserati importer Ulf Sundberg and in 1999 it was shown at the Maserati Classic International at Goodwood. Soon after, the Ghibli was sold to Lennart Liden of Vence, France, who entrusted the car to Maserati specialist Candini in Modena, for servicing in fall 2005. More recently, the Ghibli Spider returned to the US and was owned by Jacques Pozzo di Borgo, the owner of Maseratisource and MIE Corporation, two of the foremost Maserati parts specialists.

Today, the Ghibli Spider is finished in a handsome triple black color scheme, although the older cosmetic restoration is beginning to show its age. As such, this Maserati could be driven and enjoyed in its current condition for a few years, then restored to its glamorous original color scheme and debuted on the concours circuit. Included with the sale of this 4.9 SS is a report prepared by Maserati historian Dr. Adolfo Orsi Jr., which includes a chronological history and copies of important factory documents including the build sheets, certificate of origin, sales invoice, as well as early shipping and service records.

With just 46 examples built, the Ghibli 4.9 SS Spider is among the most exclusive of all road-going Maseratis and one of the most sought-after high-performance Italian exotics of the early 1970s. These extraordinary automobiles rarely appear for sale, either at auction or privately, as most are fixtures in major collections. This particular example, with its fantastic original color scheme, desirable ZF five-speed gearbox, and matching-numbers engine, is the ideal candidate for a concours-quality restoration – one that would return this most deserving car to its original splendor.