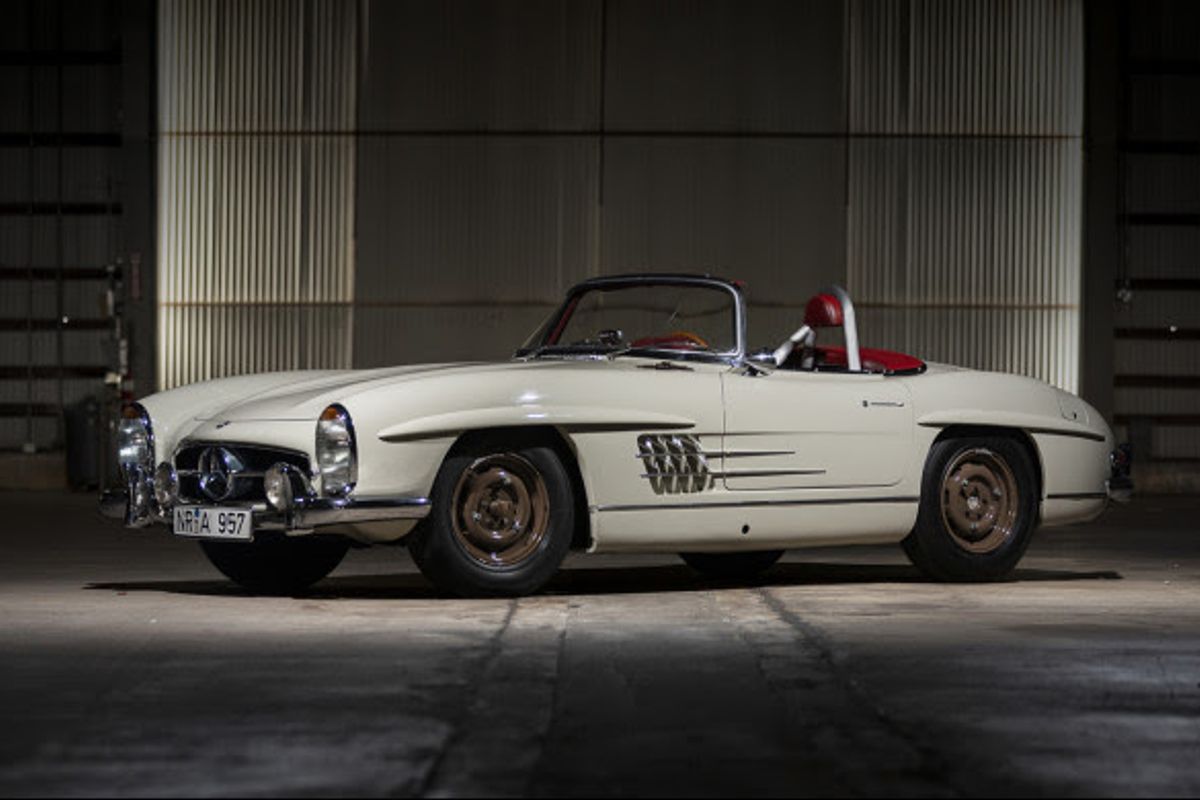 Few models in the history of the automobile possess the thoroughbred bloodline of the Mercedes-Benz 300 SL Roadster. Descended from the dominant W194 competition cars and production Gullwing, the 300 SL Roadster, introduced in May 1957, represented a further refinement of this well-established, yet innovative sports car design. Although the Roadster retained the advanced space-frame chassis, fuel-injected three-liter straight-six, and fully independent suspension of the Gullwing, its conventional doors, revised cockpit, improved handling, and increased power made it a much more comfortable, well-rounded machine. The 300 SL Roadster’s unique combination of world-class performance, elegant styling, and extraordinary build quality earned it legions of admirers, and the new open-top model outsold the Gullwing despite a significant increase in price. In all, Mercedes-Benz built 1,858 examples of the 300 SL Roadster between 1957 and 1963.

The car presented here, chassis 7500094, is among the first 300 SL Roadsters built. According to Mercedes-Benz factory records, this Roadster was completed in June 1957, equipped with engine no. 7500108 and body no. 7500020. Consistent with its production date, this car possesses a variety of rare hand-tooled, early production components that distinguish it from later examples. Many of these cosmetic and mechanical features were shared with the Gullwing and were quickly phased out once series production was underway, while other details, such as the aluminum convertible top bows (stamped 020), are unique to the earliest Roadsters.

Factory records also confirm that this 300 SL was built to order for Princess Ashraf ol-Molouk Pahlavi, the twin sister of Mohammad Reza Pahlavi, the last Shah of Iran. A powerful and influential figure in her own right, Princess Ashraf was widely considered the “power behind her brother” and was instrumental in orchestrating the US-backed 1953 Iranian coup d’état that led to him taking the throne. She was also a strong supporter of women’s rights, advocating for reforms through her work with the United Nations and other international organizations.

While in power, Mohammad Reza Shah was an important patron of the Mercedes-Benz marque and eventually became a major shareholder in the company. In fact, the Shah is personally credited with the creation of the Geländewagen (Cross-Country Vehicle), when he placed a 20,000-truck order with Mercedes-Benz in the 1970s. Princess Ashraf was also quite fond of the marque, and she owned several glamorous models during the 1950s, including a 300 S Roadster and a 220 S Cabriolet. She was among the first to place an order for the new 300 SL Roadster in 1957, which was specified in the elegant, special-order color Perlgrau (Pearl Grey, DB 125) along with red leather upholstery, black soft top, Becker Le Mans radio, Michelin tires, and European equipment, including lighting and instrumentation.

It is not known how long Princess Ashraf kept this 300 SL Roadster, but the car’s next owner, Thomas Foster Hamilton, was an equally fascinating individual.

One of the most influential figures in the history of the aviation industry, he was the founder of the famed Hamilton Standard Company, a firm that revolutionized propulsion technology of propeller-driven aircraft in the years prior to WWII. Growing up in Seattle, he was immersed in the burgeoning aircraft industry and was a close personal friend of William Boeing. Following WWI, Hamilton was instrumental in the development of the all-metal aircraft, with James McDonnell, of McDonnell Douglas fame, serving as his chief designer. During the 1920s, he served as president of United Airports, a division of United Aircraft and Transport Company, and was responsible for building the new Burbank Airport outside of Los Angeles.

In the years leading up to WWII, Hamilton was an advocate for the American aviation industry, setting up headquarters in Paris and assisting companies like Sikorsky and Pratt & Whitney to establish manufacturing license rights in Europe. During the war, he ran Hardman Aircraft, which produced nacelles for the B-17 bomber. Following WWII, Hamilton became interested in real estate development and built a sprawling resort on the coast of British Columbia as well as a private community in the Mammoth Lakes region of Southern California.

It is believed that Hamilton purchased the 300 SL while living in Paris during the early 1960s and prepared the car for use in European rallies. This included fitting a pair of Marchal driving lights, leather hood straps, three-spoke Nardi steering wheel, aircraft-style safety belts, and driver’s-side aluminum roll bar, as well as front and rear “nerf bars,” with a central Marchal spotlight and club badges mounted on the front crosspiece. The most fascinating addition is a custom-fabricated, aviation-inspired instrument panel, directed at the passenger, which includes a Halda Speedpilot, Tapley & Co. gradient and acceleration meter, Abercrombie & Fitch-branded Heuer Autavia rally clock, and a Sufft Auto-Aeroid altimeter.

As documented in the Gull Wing Group roster and period registration records, the rally-prepared 300 SL Roadster remained in the Hamilton family for decades, with ownership passing to T.L. Hamilton in 1969, and then to Thomas F. Hamilton II in 1973. Finally, in 1996, Tom Hamilton II sold the Roadster to his friend, Scott Dapron of Prescott, Arizona. Mr. Dapron, a well-known hot-rodder who had worked for Mickey Thompson’s racing team during the late 1960s and early 1970s, kept the 300 SL in his eclectic collection of racing cars, motorcycles, speed equipment, and automobilia until his death, whereupon it was sold to the current owner.

Today, this remarkable find presents in wonderful unrestored condition, still retaining its matching-numbers engine, original leather upholstery, and period rally equipment. Although the bodywork has been refinished in Weissgrau (White Gray), with an appropriate DB 158 paint code tag in the engine bay, sections of the original Perlgrau paint are present behind the dashboard. The wheels (most date coded May 1957) and factory hardtop (stamped with body no. 020) are finished in a distinctive light brown for a delightful contrast. The 300 SL wears period-correct Michelin X tires, features proper Sekurit side glass and, although the windshield has been replaced, the original glass accompanies the car.

Included with the sale are the metal tonneau cover (stamped 020), tool kit, jack, custom fabric tonneau, and Mercedes-Benz owner’s manual and parts catalogues, which are signed by Tom Hamilton. The sale also includes a documentation file that includes a copy of the factory build record, Gull Wing Group roster entry, and various registration records dating back to the 1970s.

Surely one of the most exciting discoveries in recent memory, this early production 1957 Roadster, with its fascinating provenance, desirable factory specification, and charming period rally equipment, is an ideal candidate for rallies such as the Colorado Grand or Mille Miglia, as well as a unique entry into selective concours d’elegance. Gooding & Company is proud to present this extraordinary Mercedes-Benz and recommend it to any collector in search of a truly special 300 SL.