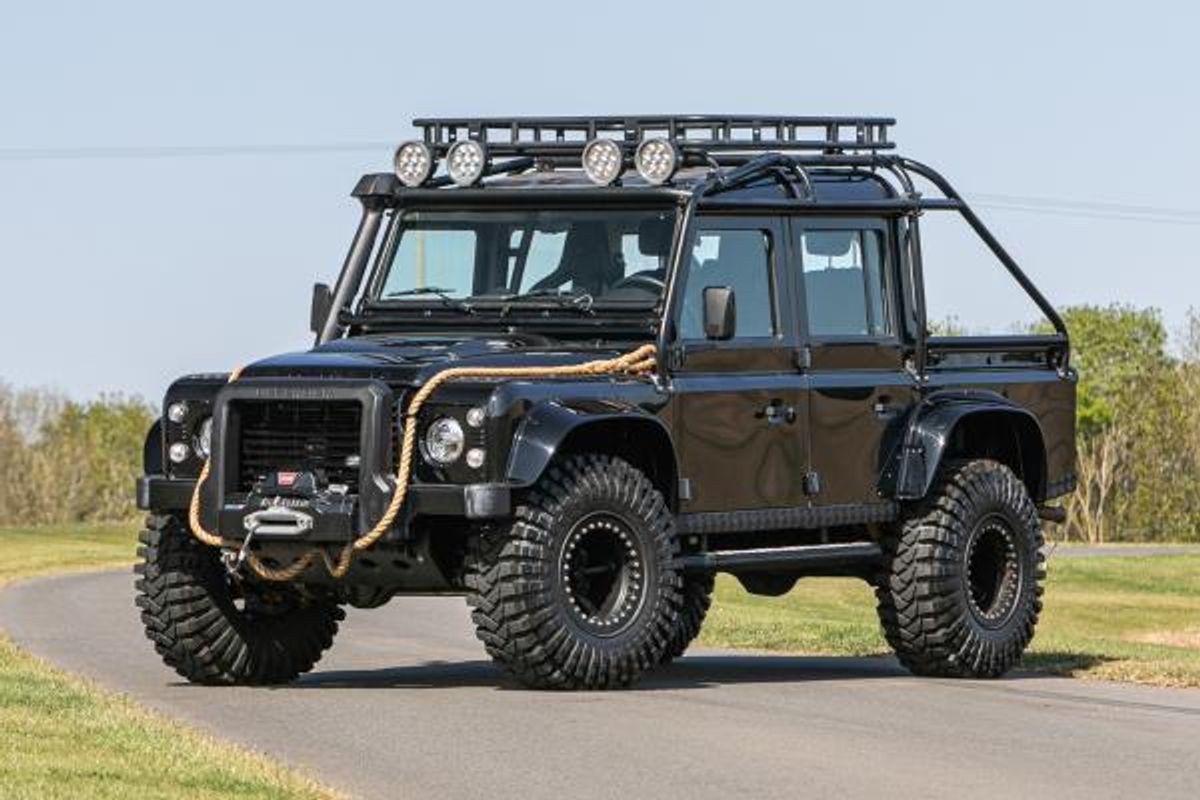 Specially commissioned for the film and built by Bowler Motorsport
Very low mileage Ferrari and three special Aston Martins
Two stunning Mercedes-Benz SL AMG also with very low mileage
A rare opportunity to own a Land Rover Defender used in the James Bond Film, Spectre, is set to star in Silverstone Auctions Live Online sale on the 23rd May.

Yesterday, Thursday 30th April, was not only the anniversary of the production version of the Land Rover being launched to the public at the Amsterdam Motor show in 1948, but it was also #WorldLandRoverDay so what could be a better time to announce this very special Bond car being offered for sale.

In 2015 the 24th James Bond film was presented to the world featuring another world-class car chase, this time involving a Land Rover Defender. Eon Productions commissioned 10 special 110 Defenders from Land Rover and with the help of Bowler Motorsport, specialist Land Rover modifiers, they converted them into the ultimate getaway cars.

Bowler Motorsport added huge 37-inch tyres, a heavy-duty roll-cage, stiffened up the suspension and among other things installed a hydraulic hand brake to spice up the action. The engine was also tuned to 180bhp.

There were two specifications of cars produced, one for the high-speed getaway road cars and the others for the snow scenes of which this is one of those.

Only seven of the ten specially produced cars now survive and this car is number 9, three were destroyed during filming, no surprise there!

Nick Whale, Silverstone Auctions Managing Director commented: “This is a very special opportunity for someone to own a piece of Bond film history. The rarity of these means they don’t come to market that often.”

“Anything from the Bond franchise attracts worldwide interest and this Land Rover is almost as it was from the day it left the film set. It will need registering if you wish to use it on the road and it comes with a file of correspondence including details of when and where the car was to be used in the film.”

“This is a rare opportunity not to be missed.”

The Spectre Land Rover is one of thirteen cars being offered from a collection of extremely high-quality cars with their own unique story.

Among the collection are three Aston Martins. A 1994 Virage “Widebody” Volante, number 3 of 26 factory-built cars with one former owner and just 10,950 miles on the clock. The second car is a 1984 V8 Series 4 “Oscar India” with 10,500 miles in superb condition. With a wonderful documented history this would be a perfect addition to any collection. The third car is a rare 2003 manual V12 DB7 Vantage with a fully documented history and 43,481 miles.

Other notable standouts are a 7,600 mile Ferrari 360 Modena F1 with a detailed service history and presented in Rosso Corsa. There are also two AMG Mercedes-Benz, a 2004 SL65 in Almandine Black Metallic with just over 13,000 miles and a 2006 SL55 in Iridium Silver and 24,605 miles. Both these cars are serious powerhouses and present very well making them collectable modern classics.

If you fancy a Porsche, a 1971 911 2.7 RS Recreation is being offered. Presented in Viper Green and now fully restored and recreated, this is an incredible car. Based upon an original 2.2 litre 911E, a rare and valuable car itself, this is one of the few recreations using an earlier car. This is a superbly presented and legendary spec car.

We could go through all thirteen cars, but this should give you a flavour of the quality being offered, the others are as follows:

Nick Whale, Silverstone Auctions Managing Director commented: “This is a very special collection of cars on offer and we are delighted our vendor has chosen our May Live Online auction to offer these cars.”

“The quality of the consignment is extraordinary, with beautiful classics and modern classics.”