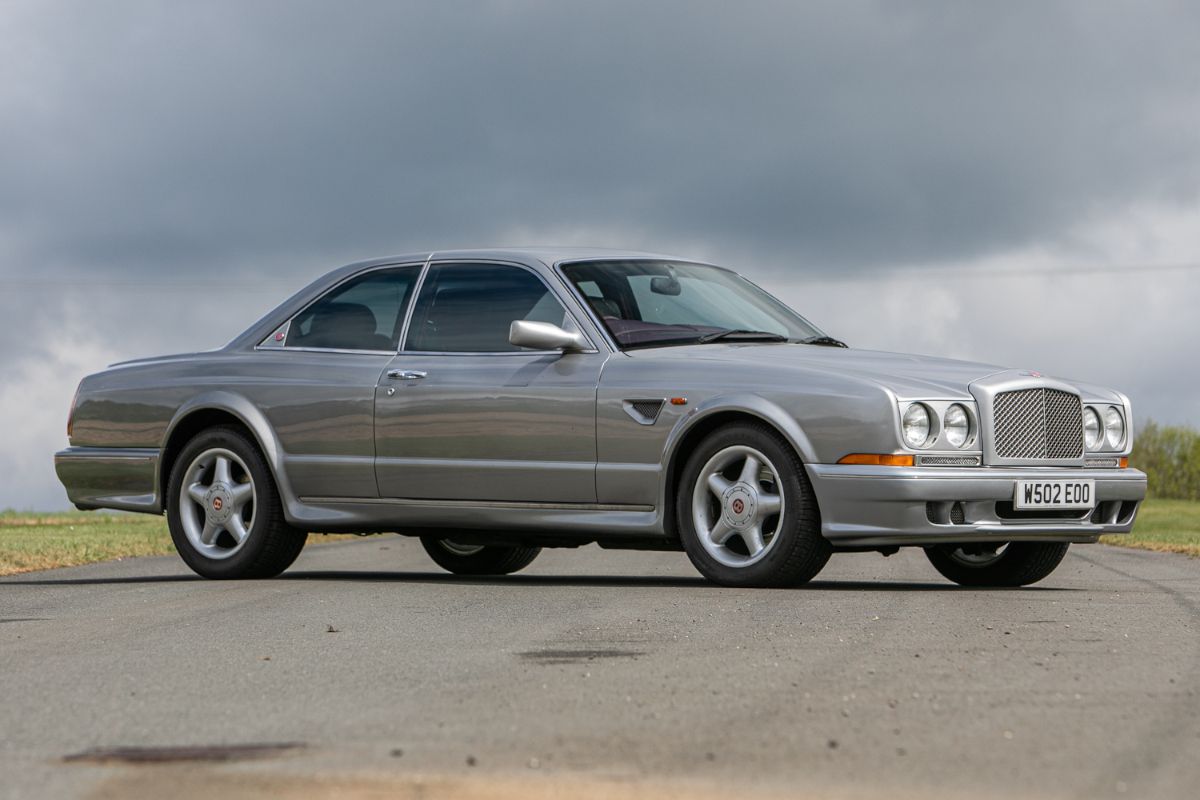 21,00 miles in 21 years for a superb looking Rolls-Royce Silver Seraph
A 1971 Lotus Europa restored over a 12-year period
An Aston Martin Vanquish, 1 of 375 genuine right-hand drive “S” models
A rare and desirable Bentley Continental R Mulliner Widebody is to be offered at Silverstone Auctions live online sale on the 23rd May.

Silverstone Auctions impressive catalogue for their live online sale features several desirable British classics and this Bentley is certainly one of the stars.

The Continental R Mulliner was conceived after customers expressed interest to Bentley about fitting the Ts more powerful engine to the Widebody Continental R. In 1999 the R Mulliner was introduced at the Geneva Motorshow. Each car was individually tailored and this particular car was finished in special order Silver with a dramatic Mulberry interior along with a host of special extras including an engine-turned aluminium dashboard. At an estimate of £72,000 to £82,000 and with 33,000 miles and service stamps from Bentley and Frank Dale, this is an impressive and highly specified model of a sporting Bentley.

The Rolls-Royce Silver Seraph was the first car to be built under BMW ownership and still by hand at the Crewe factory. They were fitted with the 5.4 litre V12 BMW engine providing a top speed of 140mph. This 1999 model is superbly presented in Amethyst with a Cotswold hide interior with Indigo piping and plenty of Burr Elm. Having had just three owners in 21 years this car has wafted along for just 21,000 miles and has been meticulously looked after by Rolls-Royce specialists and is estimated at £32,000 to £36,000.

The Lotus Europa was launched in 1966 by Colin Chapman using his design style of Simplify, then add lightness which culminated in an economically produced, mid-engined, two-seater at a reasonable cost. In 1971 the S2 Type 74 Europa Twin Cam became available with 105bhp and this particular car has undergone a body off and new chassis restoration over a 12-year period. It has been fastidiously carried out and repainted in Roman Purple with a cream leather interior. Over £30,000 has been spent on producing this immaculate car which now has 148bhp and is offered at £22,000 to £26,000.

Our final car in this release is the 2005 Aston Martin Vanquish S, one of 375 built-in right-hand drive and has just 28,300 miles on the clock and comes in the Plus 2 format allowing room for the kids! This is a highly specified car, due to it being a former dealer demonstrator. Once destined to form the centrepiece of a museum collection, it was subsequently sold to the current vendor, who purchased the car and then had it thoroughly checked over by specialists, Bamford and Rose, to ensure it was the best Vanquish S available. This car has been maintained regardless of cost with a recent service by Aston Martin Works. Having driven it for 5,000 miles whilst in his ownership since 2013 it is now available for someone else to enjoy at £75,000 to £85,000.

Harry Whale, Silverstone Auctions Manager commented: “These are a few of the fantastic cars we will be offering at our May live online sale. Superb examples of British classics which are now fast becoming popular additions to any enthusiast’s collection.”

“We already have an impressive catalogue of cars but are still accepting entries up to the 13th May, so please do contact our specialist team if we can be of help.”

AUCTION DETAILS: The May Live Auction - Saturday 23rd May 2020