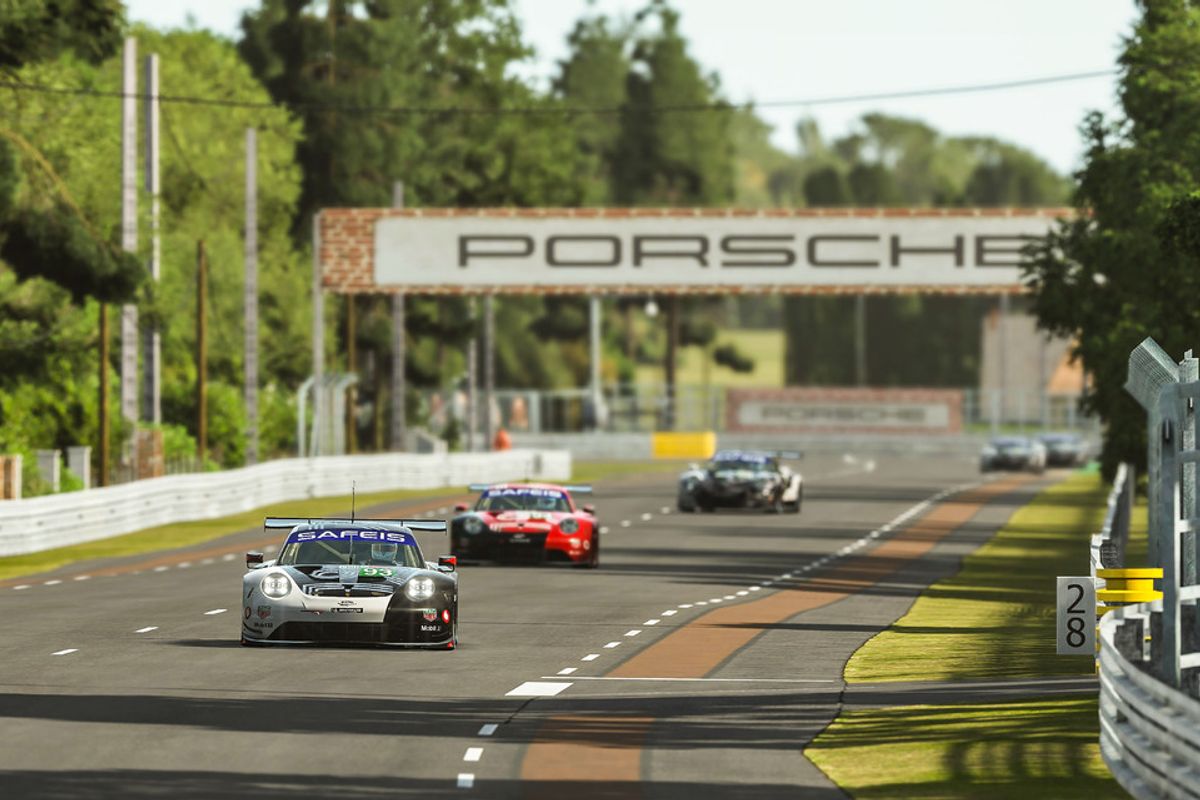 The Porsche Esports Team takes up the virtual 24 Hours of Le Mans today from pole position in the GTE-class. After Friday’s 20-minute qualifying session, four 911 RSR cars locked out the first four grid spots, with a total of six Porsche placed in the top ten. Joshua Rogers clocked the best time on the 13.626-kilometre Circuit des 24 Heures in 3:46.550 minutes. The Australian topped the time charts in all three sectors, albeit not in the same lap. Nevertheless, the 20-year-old driving the No. 93 RSR relegated his American teammate Mitchell deJong to second place by 0.632 seconds. The second grid row is occupied by the No. 88 Porsche campaigned by Dempsey-Proton Racing driven by Kevin van Dooren from the Netherlands, and the Frenchman Jeremy Bouteloup in the factory squad’s third 911 RSR. David Williams rounds off the result for Porsche with sixth place in the No. 94 car.

The virtual 24 Hour of Le Mans gets underway (Saturday, 13 June at 3pm. Each of the four 911 RSR fielded by the Porsche Esports Team is shared by two professional sim racers and two works driver, including the three overall winners of the real long-distance classic, Neel Jani (CH), André Lotterer (D) and Nick Tandy (GB).

Motorsport fans can follow the race as a live stream at motorsports.porsche.com, which is supplemented by background reports on the Porsche Esports Team. The Porsche channels on YouTube, Instagram and Twitch offer exclusive behind-the-scenes insights into the paddock of the Porsche works squad. Moreover, the digital race of the FIA World Endurance Championship (WEC) and the 24 Hour of Le Mans can be viewed on YouTube, with the Le Mans 24 Hours also shown on Facebook and Twitch.

Qualifying quotes
Marco Ujhasi (Manager Esports at Porsche Motorsport): “What a great start for our fledgling Porsche Esports Team. We worked hard during the past weeks and, thanks to perfect teamwork, we managed to fully incorporate the experiences from the real and virtual racing world. The significantly higher grip conditions didn’t surprise us and enabled this fantastic result in today’s qualifying. Now we’re going to have a virtual dinner together and then we’ll turn our full attention to preparing for the race.”

Joshua Rogers (Porsche 911 RSR #93): “Wow. That was one of the best laps I’ve ever done. I made a few mistakes, particularly in the last chicane. But now I’m on pole, and I even beat my teammate, Mitchell. I couldn’t have expected anything more in the quali. All in all, that was a strong team effort. We’re looking forward to the race tomorrow. Starting on the front row makes it a little easier but it’s not the be-all and end-all in a 24-hour race.”

Mitchell deJong (Porsche 911 RSR #91): “I’m very happy I could put the number 91 car on second place and to have a front-row Porsche lockout in the GTE class. I’m thrilled that the race gets underway tomorrow with Neel Jani taking the car to the green flag. We’re in a great position to fight for some fantastic results.”

Jeremy Bouteloup (Porsche 911 RSR #92): “Things went okay in the number 92 Porsche Esports 911 RSR. I’m not entirely satisfied with my performance although both of my attempts were decent and safe enough for place four. This is just one small part of the job and we’re looking forward to doing most of it tomorrow in the race.”

David Williams (Porsche 911 RSR #94): “To lock out the front row and have four cars in the top six overall is an incredible result for the whole team! I was a little conservative on my first run and a bit scrappy on my second but still very happy to put the number 94 car in sixth position for tomorrow.”