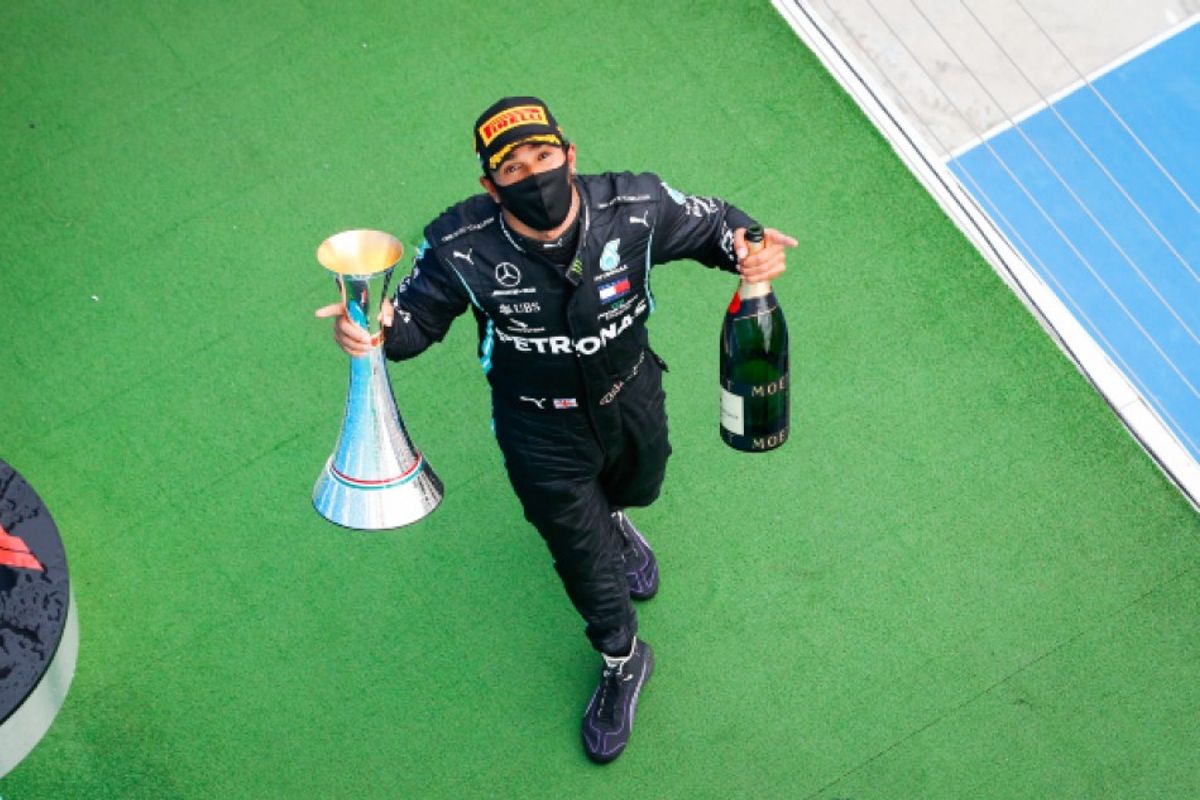 Verstappen made a fantastic recovery to second place after almost exiting the race before it event started. The Red Bull slid off track on his lap to the grid and hit the barriers, breaking his front wing and damaging his front left suspension.

However, brilliant work by his crew on the grid to repair the damage meant Verstappen was alble to start and after a lightning start he rose to third and then claimed second place in the first round of pit stops.

The race start was incident-packed as eventual third-place finisher Valtteri Bottas made a tentative start that initially carried a suspicion of a jump start and dropped back. Verstappen, though, made a brilliant start and as Hamilton led away Verstappen powered through from P7 on the grid to challenge Racing Point’s Lance Stroll. The Canadian held his line through Turn 3, however, and Verstappen settled into P3 ahead of the Ferraris of Vettel and Leclerc.

The situation changed rapidly, though. Both Haas drivers pitted before the start of the race to change tyres, with Kvyat joining them at the end of lap one. Ferrari’s Charles Leclerc and Bottas, who replays later showed was stationary when the lights went out, then pitted at the end of lap two to take on dry tyres. Vettel also pitted but his stop was a troubled on as a stream of cars came into pit lane and the Ferrari crew failed to find a gap into which he could be released. Vettel lost a large amount of time and dropped back from fourth.

Hamilton, too, pitted for medium tyres, which promoted Verstappen to the lead.

It was a brief spell at the top, though, as Verstappen also headed for the pit lane to shed his intermediate tyres. He took medium tyres and rejoined in P2.

After 12 laps Hamilton led Verstappen by a whopping 9.4 seconds with the prescient Magnussen in third place ahead of Stroll and Bottas who had charged through the pack. The second Haas of Romain Grosjean was in sixth place ahead of Leclerc.

Behind them Alex Albon had muscled his way through from 13thon the grid to ninth place behind Vettel and when the German locked up at Turn 12 and drifted wide, Albon  breezed past to take P8. He then closed up on Leclerc and the two began a tough tussle for seventh place, with Vettel soon joining the contest.

Albon  made a couple of moves that were sternly rebuffed by Leclerc but at the end of lap 17 he made a better exit out of the final corner and got close enough to launch a brave move down the inside into Turn 1. Leclerc moved to resist but Albon  was already alongside and out of the corner he drew away from the Ferrari and settled into seventh place. Vettel then also got past Leclerc who was struggling on soft tyres.

At the front, Hamilton was fully in control and on lap 24 he held a 12-second advantage over Verstappen, who was also comfortable in P2, 15.5s ahead of Stroll. Bottas now held fourth place ahead of Magnussen, with Grosjean in sixth ahead of Albon  who was three seconds behind.

By lap 28 that gap had narrowed to just 0.7s and on the following lap he closed up on the pit straight and powered past the Haas through Turn 1 to move to P6. The next target, 7.7s seconds up the road, was Magnussen.

At the end of lap 30, Vettel made his second stop of the race from P9, taking on hard tyres and after dropping to P11 he soon began setting fastest laps as he tried to close the gap to McLaren’s Carlos Sainz.

The pit window was now firmly open and Stroll headed in for mediums and then Verstappen made his second stop, taking on hard tyres in a fantastic 2.0s stop. Hamilton then pitted for medium tyres. He rejoined in the lead ahead of Verstappen while Bottas, who had successfully undercut Stroll, was now third and well clear of the Racing Point.

The Finn now pushed hard on his new tyres and he quickly began to reel in Verstappen. On lap 40 he was 5.3 seconds behind the Red Bull man and by lap 45 the Finn was just 1.3s behind the Dutchman. Behind them Vettel had risen to fifth after his early second stop but Albon  was closing in and lapping quicker than the Ferrari.

With five laps left, Albon  found himself 1.1s behind Vettel, while Bottas had closed to just four seconds behind Verstappen. And Albon  claimed P5 when Vettel ran wide into Turn 2 on the following lap.

On lap 69, Bottas closed to within a second of Verstappen. At the end of the lap Verstappen made a good exit from the final Turn and that left him with a gap of almost eight tenths to Bottas, and that was enough to keep Bottas at bay for the final lap.

Ahead, Hamilton claimed his eighth Hungarian Grand Prix victory with a new race lap record of 1:16.627. Verstappen then crossed the line to take a brilliant second place, with Bottas third. Stroll scored his best result since the 2019 German Grand Prix with fourth and Albon  finished in a superb fifth place after starting 13th on the grid.

Behind Albon , Vettel took sixth for Ferrari ahead of the second Racing Point of Sergio Pérez. Daniel Ricciardo enjoyed a good race to P8 ahead of Kevin Magnussen and the final point on offer went to McLaren’s Carlos Sainz.