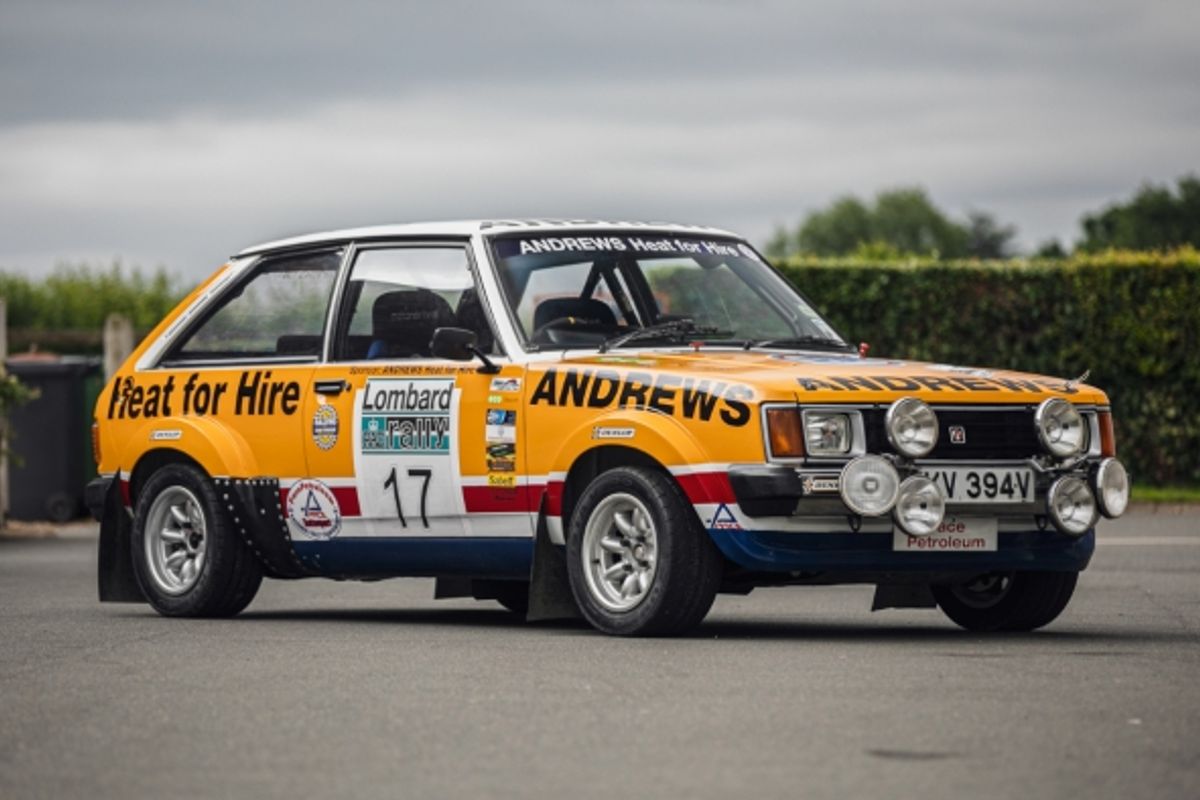 TO STAR AMONG A GREAT AUCTION LINE UP OF COMPETITION CARS

A strong line up of competition cars are to be auctioned on the 31st July and 1st August at the Silverstone Classic Live Online Auction, including the ex-Russell Brookes works Talbot Lotus Sunbeam.

1981 was a milestone in the World Rally Championship, it was the start of the four-wheel drive era and Audi were back on the scene. However, Britain’s Russell Brookes and co-driver Mike Broad were to compete in the championship with the Talbot Lotus Sunbeam.

Russell had agreed to join Talbot in a Mike Little prepared car for the 1980 and 1981 seasons with his long standing and most successful sponsor, Andrews Heat For Hire. 1981 was a great year for Talbot taking the manufacturers championship.

Silverstone Auctions are delighted to be offering Russell and Mike’s fully restored 1981 Lombard RAC Rally championship car which has more recently been used regularly in demonstration events. Since its retirement from the world stage Russell used it competitively on national events, his last being the Halloween Historic Stages in 2010. It was also used competitively by up and coming drivers and Ladies Rally Champion Louise Aitken-Walker.

This fabulous Talbot Lotus Sunbeam still retains its original running gear and is regularly maintained. The car is in full rally specification with an MSA passport and also many original parts have been kept and are offered.

Estimated at £100,000 to £125,000 this is a superb rally car with so much history attached to it and with one of the most successful sponsorship liveries in the history of rallying.

Our next challenger is the 1986 MG Metro 6R4 and one of the first works cars to be supplied by Austin Rover Motorsport to a privateer team, ARTiX Ltd.

Following the demise of Group B rallying the car was subject to the new rules and the 3.0-litre engine had its power performance reduced in line with these new regulations. However, this car still retains the unique micro-chip in the ECU which allows it to run at the higher pressure and more BHP.

The 6R4 was driven very successfully by John Brown in the British Rally Championship, taking several top places, but due to lack of development by Austin Rover the cars was sold on. It continued to be campaigned taking further victories and went on to be one of the most successful 6R4s.

The car underwent a full bare metal restoration about four years ago and is now presented in the original ARTiX livery. Many of the original features have been kept and restored and the Goodman 2.8-litre engine has been fully serviced and tuned by John Manklow, one of the original engine builders.

We now move from rallying to circuit racing and touring cars. On offer is the 1998 Honda Accord Supertourer driven by Peter Kox. The Honda was built and run by Prodrive, who had vast experience in running this type of car. Peter Cox’s teammate that year was James Thompson. For the last few years, the Accord has been kept in a large private collection of competition cars and would therefore need recommissioning. Estimated at £50,000 to £60,000 inclusive of a spares package, this is a fabulous opportunity to get involved with the HSCC Super Tourer Challenge.

If you are looking to get into historic racing, the 1950 Jaguar XK120 Competition Roadster is a lovely car which was fully restored back in 2011 and has been maintained ever since. Its first owner was an enthusiastic amateur race who happened to be friends with Duncan Hamilton. Upon collecting the car new, he entrusted it to Hamilton to test it out during 1951 at national and international meetings. For 1952 they both needed a faster car so decided to sell the XK120.

After it was sold, the Jaguar was still seen taking part in many competitions, including a spell in Ireland before coming back to the England in 1968. Estimated at £390,000 to £450,000 this is an historically important Jaguar with a comprehensive history file and raced by one of the most successful drivers of the 1950s.

Nick Whale, Silverstone Auctions Managing Director commented: “We have a fabulous selection of competition cars which are being offered across both days. We are delighted to be offering the works Talbot Lotus Sunbeam of Russell Brookes. He was a well-known figure at many historic rallying events and was also local to us, so it seems very fitting we have been asked to sell this car.”

“Our team are taking appointments for viewings, which I highly recommend. We have a secure and private storage facility to enable interested parties the opportunity to have a look at the cars prior to the sale.”

Silverstone Auctions are now booking appointments for those interested in viewing the Lots at their centrally located private storage facility. They can be contacted on 01926 691141 or email enquiries@silverstoneauctions.com and would be happy to talk with you about any of the cars offered in the sale.