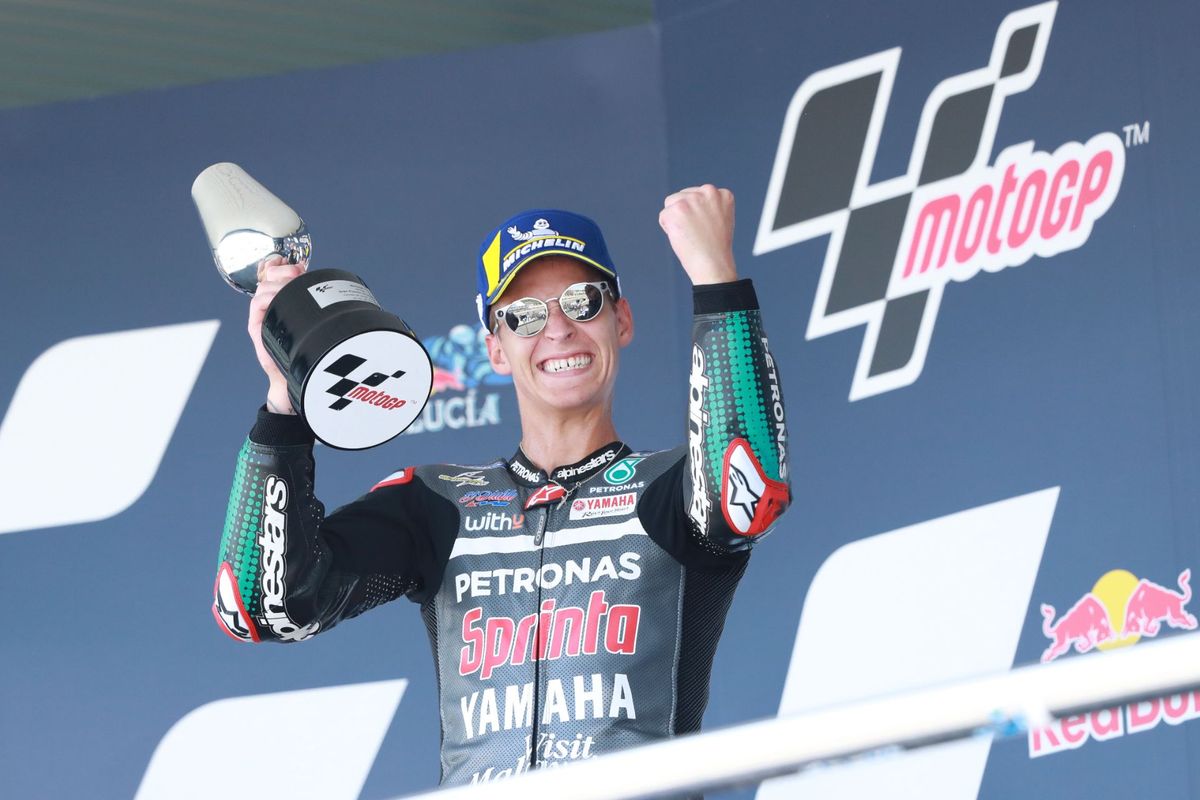 Fabio Quartararo didn’t put a foot wrong in Sunday’s MotoGP race, leading from the lights to the flag and making it back-to-back victories in Jerez. Quartararo also extended his lead in the championship standings. Unfortunately, it was ultimately a race to forget for team-mate Morbidelli, who was forced to retire with mechanical problems after fighting in the podium positions.

Quartararo made the perfect getaway off the line and held the lead into the first corner. From then on the Frenchman made no mistakes and with every lap raced he continued to extend the gap to the rest of the field. While the race behind became one of attrition, Fabio saw none of it as he was in a race of his own out front. Despite slowing down to celebrate with his team on the final lap, Quartararo finished 4.495secs ahead of Maverick Viñales and Valentino Rossi, who helped to make it a Yamaha podium lockout – the first one since Phillip Island in 2014. This second win sees Fabio extend his lead in the MotoGP World Standings to ten points, and maintain PETRONAS Yamaha SRT's place at the top of the Team's Championship.

While there were celebrations for Fabio, it was heartbreak for team-mate Morbidelli. The #21 rider, who started his 21st MotoGP race as a PETRONAS Yamaha SRT rider today, was having a good race. The Italian soon made his way through the pack in the opening laps of the race, and was soon in contention for a podium place. Unfortunately with nine laps left to go, Franco’s Yamaha YZR-M1 experienced technical issues and he was forced to retire from the race.

The next race for Fabio and Franco will be in just less than two weeks, when the MotoGP paddock moves to the Automotodrom Brno, in the Czech Republic, for their third race of the season (7-9 August).

Fabio Quartararo
It was a tough race. To complete 25 laps in front in these temperatures made it the hardest race of my life! My hands and feet were so hot and there was just no air to cool you down. I felt really good on the bike though. Even though we are at the same circuit as last week, the conditions are different and we had to adapt so quickly to this. The first time I saw the gap to Valentino [Rossi] was 0.6secs, I thought that it was time to push. Then on one lap I looked back in Turn 6 and couldn’t believe the advantage that I had pulled out. At this point I knew I had to keep calm and just finish the race. I’m so happy to have another victory, especially in a race as tough as this one. It was also amazing to be on the podium with Valentino because he has been my idol for so long. I just want to say a massive thanks to my team, Yamaha, partners, my family, my friends, my manager and all the fans for their support.

The staggering heat at the Circuito de Jerez-Ángel Nieto (Spain)  proved to be the biggest challenge for Monster Energy Yamaha MotoGP’s Maverick Viñales and Valentino Rossi. The pair powered through despite extremely high temperatures and secured second and third place respectively.

Viñales had a good start from second place and immediately put pressure on Fabio Quartararo in the lead. He was right on his tail and decided to launch his first attack in the final corner of the first lap, but he went wide and as a result crossed the start-finish line for the first time in third place.

The heat then took its toll on the Spaniard who started to struggle for breath. With 17 laps to go the rivals behind him were insisting on a fight for third place. The Factory Yamaha man held firm on their first try, but later he outbraked himself in Turn 6 and had to let Francesco Bagnaia through. Now in the busier part of the rider field, he dropped back to sixth, but he kept close knowing the race was far from over.

With track temperatures over 63℃ in certain places on the track, the number of NC scorers went up. The local hero found himself behind Rossi fighting for second place in the final five laps. He had been saving his tyres especially for this scenario and put them to good use, giving the fans a bit of extra entertainment before crossing the line in second place, 4.495s from first.

Rossi had a dream start from fourth on the grid, slotting into third place right behind his team-mate, making it an early Yamaha 1-2-3. He was right on the pace and picked up another place when Viñales went wide in Lorenzo’s corner in the opening lap. The Italian was unable to stick with Quartararo, but he masterfully defended his second place from his stable mate.

With 13 laps to go the number-46 rider lost a place to Bagnaia, and he then came under pressure from Franco Morbidelli but refused to let go of his podium glory. The Doctor had not climbed the rostrum since the 2019 Americas Grand Prix, and he wasn’t going to be stopped now.

The vastly experienced Yamaha man was on the limit for the entire 25 laps but careful never to go over it. He had regained second place on lap 20 when Bagnaia suffered a mechanical failure. The race finale was a battle with his team-mate for second place. Rossi defended his position for as long as he could and concluded his heroic ride in third place, 5.546s from the front. This third place is his 199th premier class Grand Prix podium.

Today’s success of the Monster Energy Yamaha MotoGP Team earned Yamaha a 1-2-3 result (its first since the 2014 Australian GP: then with Rossi, Jorge Lorenzo, and Bradley Smith). It also contributed greatly to the 2020 championship standings. Viñales’ second place keeps him second in the rankings, with 40 points in total, 10 points from first. Rossi recovered strongly, climbing up from P18 to P6, with 24 points between him and his team-mate. Yamaha remains first in the constructor standings, and Monster Energy Yamaha MotoGP jump up to second in the team classification.

MotoGP will be back in action in two weeks’ time for the Monster Energy Grand Prix České republiky, held at the Automotodrom Brno from August 7-9.