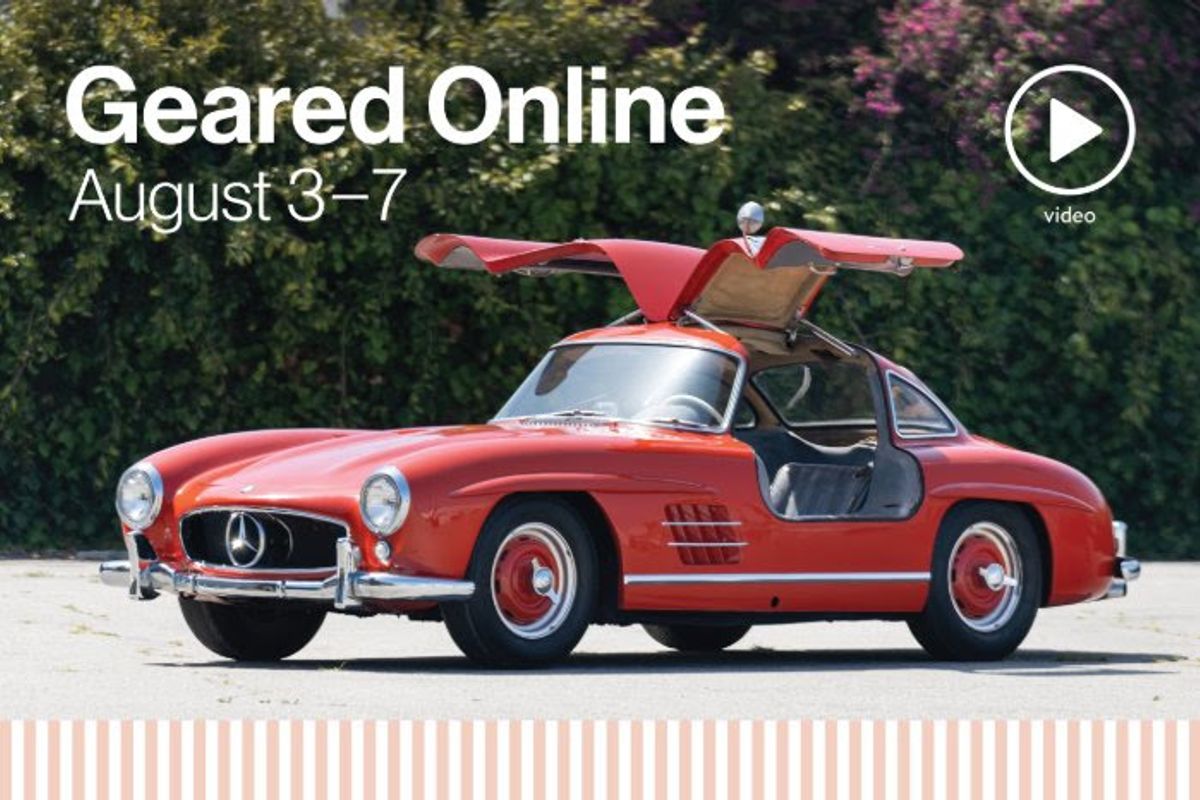 In automotive circles, the Mercedes-Benz 300 SL Gullwing is the very definition of iconic. Often and justifiably referred to as the first supercar, the 1,400 Gullwings set a new standard for sports car design and engineering. The visual excitement these cars elicit is equaled, and possibly exceeded, by their truly exhilarating driving dynamics. In the Gullwing, Mercedes-Benz produced a car decades ahead of its time.

As documented by a copy of its factory build sheet, this mid-production Gullwing was built as a special-order US-export model, finished in Fire Engine Red (DB534) with a gray leather interior. This document also confirms that this 300 SL was fitted from new with optional Rudge knock-off wheels and that it retains its original, matching-numbers engine.

According to Gull Wing Group records, the first known owner of this 300 SL was A.E. Knowles of Angwin, California, located within the Napa Valley. Oral history dating from Knowles’ ownership includes a story of his crossing San Francisco’s Golden Gate Bridge, when a maintenance crew working overhead accidentally dropped a bucket of bridge paint on the Gullwing as he neared the toll plaza. According to the story, the car was repainted on the City’s dime.

In about 1976, the Gullwing joined the eclectic collection of David Lee Spurgeon of Danville, California. The following year, it was sold to Jim Hammers of San Jose, California, joining an assortment of Mercedes-Benz cars that included a 380 K, 600 Pullman, and 300 SL Roadster.

On a rare outing, the 300 SL was in attendance at a Gull Wing Group event in Monterey, California, but otherwise saw spare use during its time in the Hammers collection before being purchased by Wayne Stoller of San Mateo, California, in 1979. Mr. Stoller dutifully maintained and preserved his prized Gullwing in largely unrestored condition for the next 40 years. Throughout those decades the car made rare appearances at small automotive gatherings and was known only to a select group of friends and 300 SL historians.

Recently acquired by the consignor, the Gullwing has been started for the first time in many years, but will require mechanical re-commissioning work before road use. Notably, this Gullwing retains its original tool roll, jack, owner’s manual, June 1955-dated Rudge wheels, and charming 1970s-era vanity plate that reads, “A 300 SL.”

Its appearance marks an increasingly rare opportunity to acquire a long sequestered, California-based 300 SL that is likely among the very last unrestored Rudge-wheel examples to be found.