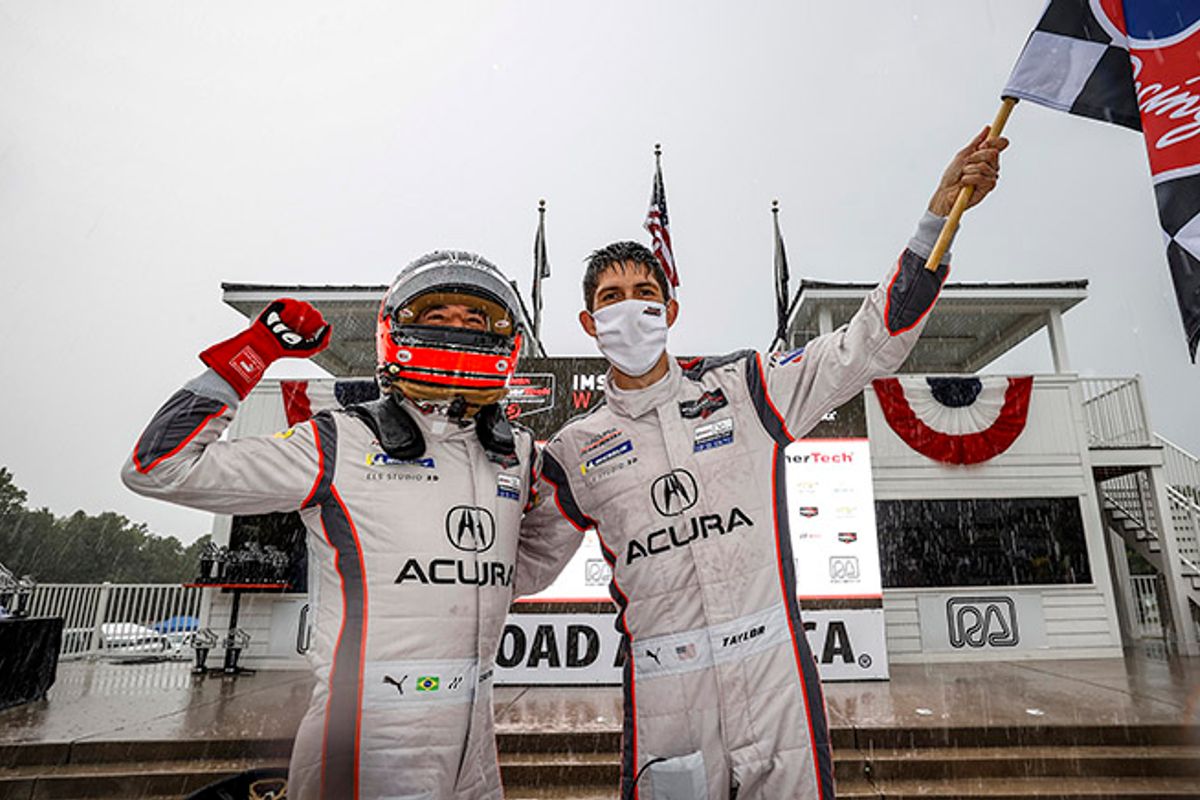 Helio Castroneves had no idea where he was going, but he knew he was fast.

Castroneves trailed van der Zande when the race in Elkhart Lake, Wisconsin, restarted with under eight minutes left following a 21-minute red flag and 22-minute full-course caution, as leader Oliver Jarvis went to the pits for rain tires. Covered by plumes of water from van der Zande’s car and slower traffic in front, Castroneves chased down the leader and eventually passed him when his car bobbled on the exit of Turn 14.

“I couldn’t see a thing,” Castroneves said. “I noticed a little gap, and every time you have a little gap when there’s a few laps to go, you go for it.”

The victory with teammate Ricky Taylor in the No. 7 Acura Team Penske Acura ARX-05 DPi was the team’s first this season in its first race after Acura announced that it would part ways with Penske’s WeatherTech Championship effort at the end of the 2020 season. Acura Team Penske first competed in the DPi class in 2018 and won the driver, team and manufacturer championships in 2019.

The team had been off to a rough start to the 2020 season, not finishing better than fourth in the first three races. Taylor and Castroneves hadn’t won since 2018.

“We don’t even know where we are in points because it’s pointless to look at them when we finish last every weekend,” Taylor said. “There’s always some bad luck or something going on, but this win definitely gives us some momentum. We’ll keep fighting.”

Castroneves said the team isn’t focused on the decision, but instead intent on turning the season around.

“Everybody knows the program is going to be forced to an end,” Castroneves said. “We don’t think about that. We want to finish on a high note. That’s our goal.”

Taylor, who started from pole alongside the Acura Team Penske No. 6 entry driven by Dane Cameron, led from the drop of the green until the first round of pit stops. He reassumed the lead shortly after Cameron tangled with Harry Tincknell’s No. 55 Mazda Motorsports Mazda DPi 35 minutes into the 2-hour, 40-minute race.

After the No. 7 Penske car changed drivers, Castroneves held spirited battles for the lead with Jarvis, van der Zande and Tincknell before Jarvis assumed the lead shortly before rain began to fall, bringing out the red flag.

Once the race restarted and Jarvis pitted for rain tires, Castroneves set his sights on van der Zande.

“Our goal is just to go quick,” Castroneves said. “We created some momentum, and we want to keep it going. Every time we’re on the racetrack, that’s what we want to do. Hopefully, this helps.”

The WeatherTech Championship resumes Aug. 21-23 with the Michelin GT Challenge at VIRginia International Raceway for the GT Le Mans (GTLM) and GT Daytona (GTD) classes. The DPi and LMP2 classes return to competition in a six-hour race at Michelin Raceway Road Atlanta on Sept. 6.

Sometimes, it’s all about timing and great decisions.

Ben Hanley and Henrik Hedman, who were at one point more than 45 seconds behind the leaders in the Le Mans Prototype 2 (LMP2) class during Sunday’s main event of the IMSA SportsCar Weekend at Road America, caught a break when Simon Trummer went off course under yellow with 46 minutes remaining in the two-hour, 40-minute race.

Hanley, piloting the No. 81 DragonSpeed USA ORECA LMP2 07, made a timely change from slick tires to wets and pulled off a surprising victory with help from Hedman’s opening effort.

“I can’t speak much about the rain,” said Hedman, who started the car second in class and 10th overall before rain changed the race. “I just thought the team made a crucial call and got Ben in early and got the wets on. That’s what won us the race today.”

The No. 52 PR1 Mathiasen Motorsports ORECA led almost the entire first two hours of the race after Patrick Kelly’s sizzling opening effort and Trummer’s strong second half. But with 46 minutes remaining and the field struggling to get around the wet track under caution, Trummer found himself in a tangle, went off course and picked up an advertising sign on the car’s nose.

The No. 52 eventually finished fourth in class, while Hanley brought the No. 81 car home with the LMP2 lead. Cameron Cassels and James French finished second in class in the No. 38 Performance Tech Motorsports ORECA, while Dwight Merriman and Kyle Tilley finished third in the No. 18 Era Motorsport ORECA.

The unusual circumstances of Sunday’s race extended the strange back-and-forth between the Nos. 52 and 81 teams to a second successive race. The No. 81 entry shared by Hedman and Gustavo Menezes was stripped of its victory July 18 at Sebring International Raceway because of disqualification over minimum driving time, giving the win to the No. 52 entry shared by Kelly and Spencer Pigot.