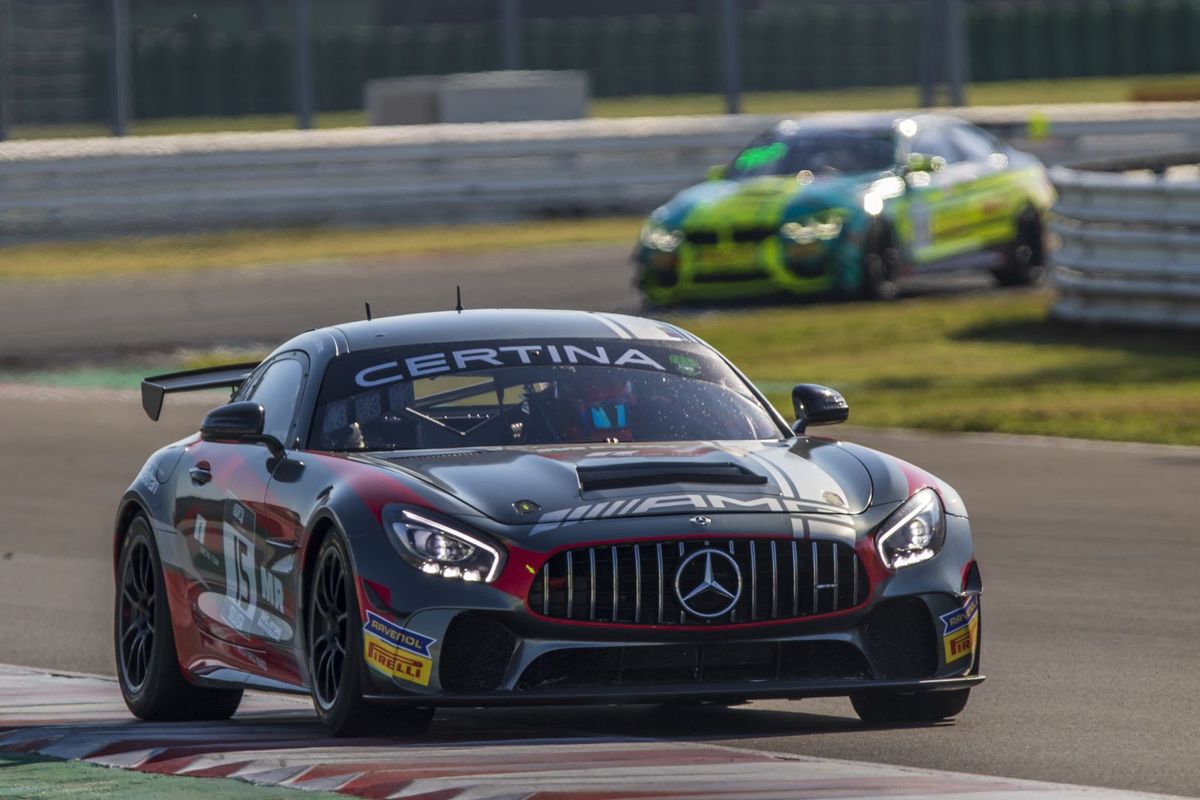 NM Racing Team scored its first victory in the GT4 European Series at the Misano World Circuit this afternoon. Lluc Ibanez and Xavier Lloveras were the first to cross the line at the 4.226-kilometre Italian circuit after a dramatic race.

Pole sitting AGS Events suffered heartbreak after dominating two-thirds of the race, when Valentin Hasse-Clot was forced to retire the car he shares with Theo Nouet from the lead. The demise of the #27 Aston Martin Vantage allowed the NM Racing Team Mercedes-AMG to take the lead and Ibanez finished the job.

After a solid and trouble-free start, Theo Nouet controlled the race and quickly built a 1.5-second lead over Thijmen Nabuurs in the V8 Racing Chevrolet Camaro GT4.R, with Borusan Otomotiv’s Cem Bölükbasi and Nouet’s teammate Gilles Vannelet in third and fourth. Xavier Lloveras dropped to fifth overall on the opening lap.

Almost 15 minutes into the race contact between Wim Spinoy in the Selleslagh Racing Team Mercedes-AMG and Ibrahim Okyay in the Borusan Otomotiv Motorsport BMW resulted in a full course yellow, followed by a brief safety car period.

The race got underway again just before the pit window opened and RN Vision STS Racing Team’s Bas Schouten and Centri Porsche Ticino’s Ivan Jacoma were the first drivers to dive into the pits for the mandatory driver change. The last one to come in was Bölükbasi, who handed over his BMW to Yagiz Gedik at the end of lap 18.

With all stops completed, Valentin Hasse-Clot in the #27 AGS Events Aston Martin was still leading, but it was now Ibanez in second for NM Racing Team, RN Vision STS Racing Team’s Gabriele Piana in third and V8 Racing’s Jop Rappange in fourth. Pro-Am leader Gedik rejoined in front of Piana, but the Italian soon passed the Turkish driver.

Problems then struck the AGS Events team. Race leader Hasse-Clot suddenly slowed down and stopped on the side of the track. The French driver tried to get his car back to the pits but was eventually forced to retire his car in turn 10. This prompted the second full course yellow of the race.

While all the cars slowed down, the second AGS Events Aston Martin also stopped. Race control sent out the safety car to allow a safe recovery of the two Aston Martin Vantages.

At the restart, with less than ten minutes left on the clock, Nicolaj Møller-Madsen overtook Jop Rappange and soon after the Dutchman lost his podium position as Gael Castelli in the CMR Toyota went by. While Møller-Madsen went on to pass Gedik to take the Pro-Am lead, Castelli’s Toyota suddenly slowed and Rappange moved back into third.

Ibanez crossed the line with only a couple of seconds remaining, but in the final lap Piana was unable to close the gap and challenge the NM Racing Team driver for the race win. After 32 laps the Spanish driver was the first to cross the line, with Piana taking second place at 3.205s and Møller-Madsen finishing in third place overall and first in Pro-Am for Allied-Racing.

Xavier Lloveras, #15 NM Racing Team Mercedes-AMG: “It was a difficult race. We started from P3, we knew our first laps would be difficult, but still we managed not to lose many positions. We made up some positions after a good stop and then after the final stop Lluc did an amazing job. We were lucky that the Aston had an issue, but I’m really happy to finish on the top spot of the podium.

Lluc Ibanez, #15 NM Racing Team Mercedes-AMG: “My teammate did a good job. The car was difficult to drive in the first five laps, but we were better in the corners. We had a good driver change and the mechanics did a great job. When the Aston had an issue, I just pushed to get more distance, because the BMW and Piana were strong. I had some pressure, but I could control the race and win!”

Nicolaj Møller-Madsen, #21 Allied-Racing Porsche: “Jörg had an amazing start, coming from 14th to 9th after one turn and then he kept it there and kept it out of trouble. We made an early stop, came out and our speed was good. We were lucky that the field got together, but we still had to pass the guys. We can be proud of this.”

Jörg Viebahn, #21 Allied-Racing Porsche: “We had a full course yellow, the tyres were overheating, so we were happy to come in and change quickly. Nicolaj is the pro, so I was happy to hand over after that start and the position. We had a good race and look forward to tomorrow!”