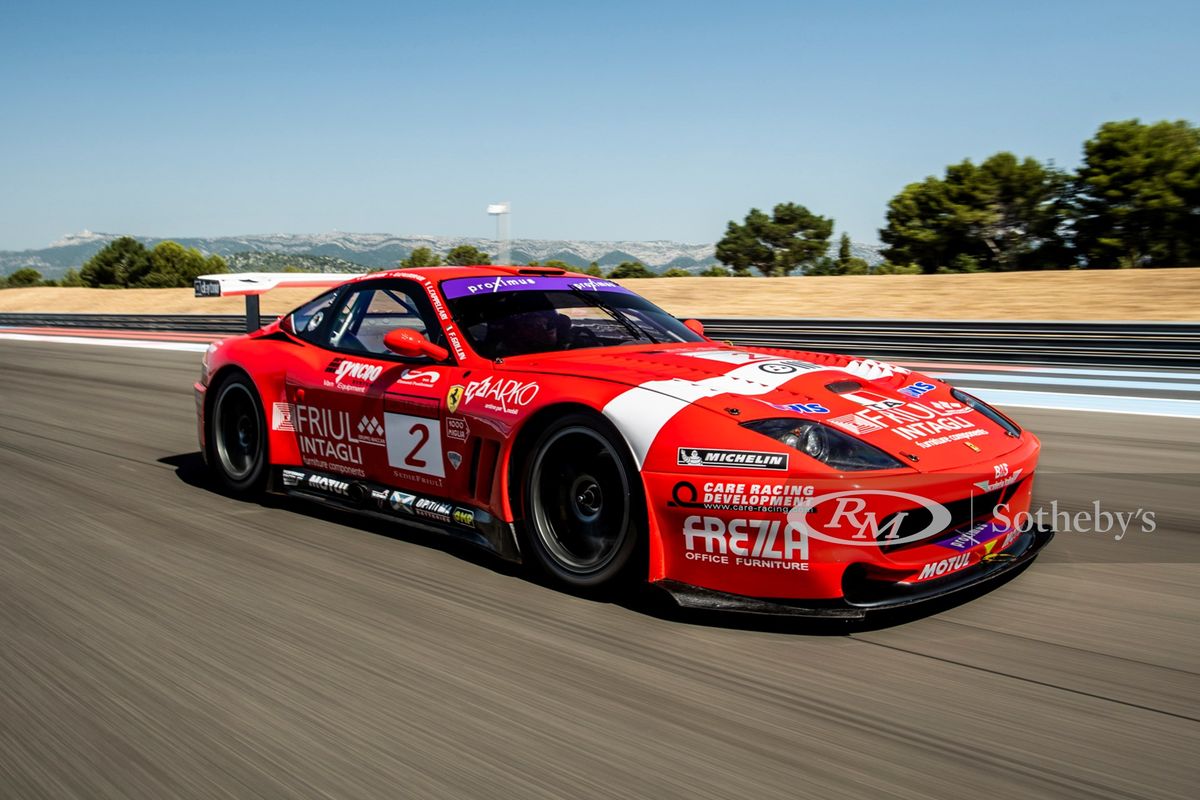 RM Sotheby’s further reinforced its position as the world’s leading auction house of fine collector cars, as it grossed $30,412,810 in its Online Only: SHIFT/MONTEREY sale and established the highest price ever achieved for a car sold in a dedicated Online Only collector car auction. The incredible 2001 Ferrari 550 GT1 Prodrive, an icon of modern era sports car racing, achieved $4,290,000 in a hard-fought bidding war on the final day of the sale.

Consigned to RM Sotheby’s Online Only auction directly by the Ferrari 550 GT1 Prodrive program promoter, Care Racing Development, single owner of the car since its race preparation in 2001, the Ferrari 550 GT1 Prodrive, serial number CRD 002/2001, is the second of ten Ferrari 550 GT1 examples built by Prodrive and it competed in 49 races, taking 15 pole positions, 14 outright race wins including The 24 Hours of Spa in 2004. It is the last V-12 engined Ferrari to win a 24-hour race overall and the car finished on the podium some 29 times. Impeccably presented and in fully rebuilt, race-ready condition, this Classiche certified Ferrari racing car was the undoubted star of the sale.

With Ferraris filling four of the top ten sales, it was the highly desirable first-generation ‘short-nose’ 1965 Ferrari 275 GTB by Scaglietti that achieved the second highest price in the sale. One of the best examples in existence of arguably one of the finest road going V-12 Ferrari sports cars built, this fully restored and Classiche certified car brought a deserved $1,980,000. Rounding off the top three sellers and splitting an all-Ferrari ‘top five’ in the Online Only: SHIFT/MONTEREY sale, was a low-mileage, highly optioned 2014 Pagani Huayra, which brought $1,848,000. The 56th of just 100 bespoke examples produced and powered by a 730 bhp, 6.0-liter twin-turbocharged V-12 engine hand-assembled by Mercedes-AMG engine, this ultimate modern-era hypercar is one of the highest specification examples created.

The appeal of the Maranello marque continues unabated within the market, and the top five results were completed by the 1964 Ferrari 250 GT/L Berlinetta Lusso by Scaglietti, offered from the Boniface Collection, which surpassed its pre-sale estimate following a flurry of last-minute bids and sold for $1,496,000; and a low-mileage, Classiche certified 1991 Ferrari F40, which sold for $1,386,000.

Gord Duff, Global Head of Auctions, RM Sotheby’s, said: “The SHIFT/MONTEREY auction has been a phenomenal success for us. We’re proud to have grossed more than the combined sales totals achieved by our two nearest competitors during what would have been the Monterey Car Week, and to have set some amazing records along the way. It’s also fantastic to see cars from all eras featuring in the top ten results of this sale, proving that there is still robust demand across a broad cross-section of the market.”

Other stand out highlights from across the sale include the 1932 Packard Deluxe Eight Individual Convertible Victoria, the sole pre-war car within the top ten results, and a stunning example which brought $1,056,000; the restored 1960 Mercedes-Benz 300 SL Roadster, with only four private owners since 1961, which sold for $1,045,000; and the outrageous 1960 Porsche MOMO 356 RSR Outlaw by Rod Emory, which smashed its pre-sale estimate to bring $858,000. Also worthy of note were the ultra-rare factory prototype 1972 Porsche 916, the first of ten pre-production 916 models built and originally owned by Louise Piëch, which achieved $957,000; a race-winning 1980 BMW M1 Procar, the 36th example of a mere 54 Procars produced and sold new to American racing driver Joe Crevier, which sold for $913,000; and a  2017 Ford GT, one of 138 models built for 2017 and offered from single ownership with just under 1,300 miles on the odometer, which achieved $858,000.