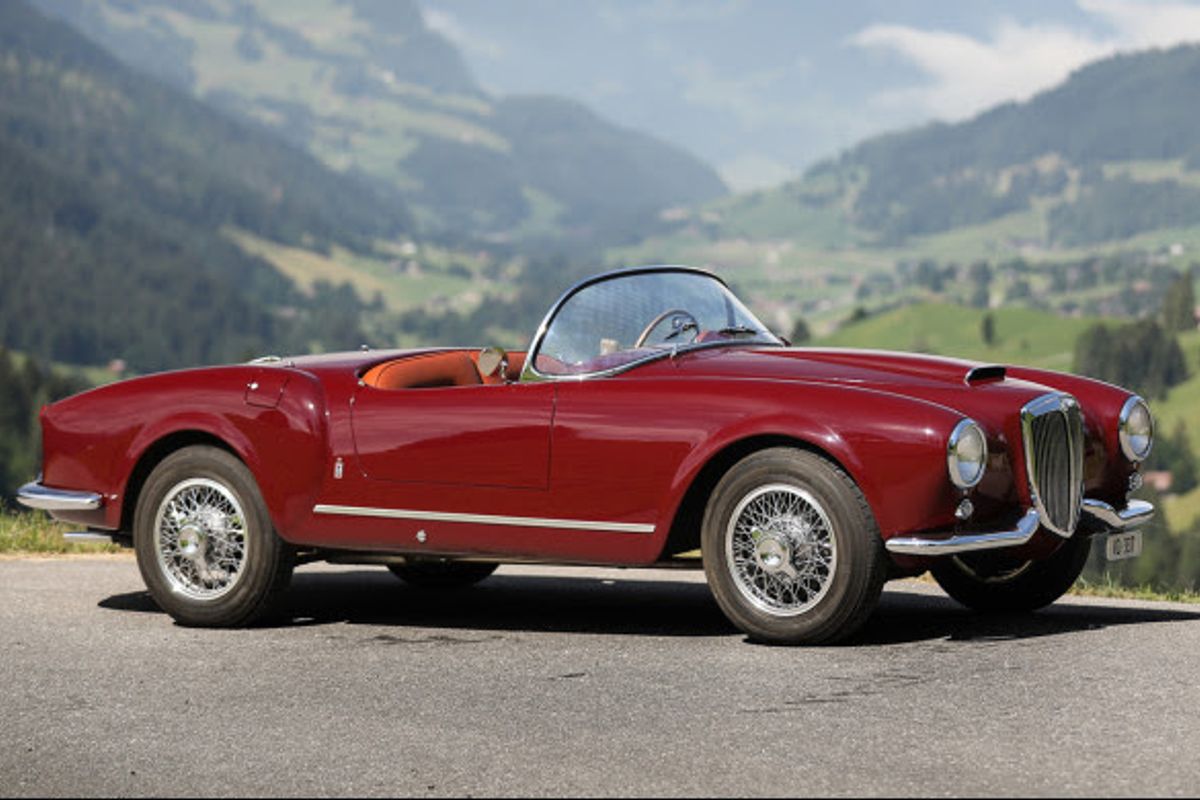 Upon its debut at the Torino Motor Show in May 1950, Lancia’s Aurelia was immediately hailed as a technical tour de force. Spearheaded by the legendary engineer Vittorio Jano, the Aurelia introduced many cutting-edge features including a rear-mounted transaxle, four-wheel independent suspension, inboard rear brakes, and a narrow-angle V-6. The Spider America’s elegant Pinin Farina design, influenced by American dream cars of the era, featured voluptuous lines, cut-down doors, split bumpers, and a fashionable panoramic windscreen. In all, just 181 Spider Americas were specified in left-hand-drive – B24S – configuration.

This Spider America is notable for being one of the few left-hand-drive examples originally delivered to a European rather than an American customer. The Lancia’s first owner, Jacques Van Wetter, a Brussels-based notaire honoraire, kept it until 1972. A superb documentation file attests to his unusually dedicated approach to ownership. The current caretaker acquired the Aurelia in 2013 and commissioned an exacting restoration with the goal of returning the car to its former splendor. During this process, German Lancia specialist B & F Touring Garage overhauled the mechanical systems, while Dino Cognolato’s workshop expertly restored the coachwork. Combining exclusivity in numbers, state-of-the-art engineering, and timeless styling, the Spider America is the rare automobile that measures up to its vaunted reputation.

Passion of a Lifetime Auction
5 September 2020

Gooding & Company is delighted to officially announce that the highly anticipated “Passion of a Lifetime” auction has been rescheduled for 5 September 2020. The company's first-ever sale outside of the US will take place during the Concours of Elegance at Hampton Court Palace. This historic venue, once home to Henry VIII and the Tudor dynasty, will serve as an awe-inspiring setting to a landmark sale. The once-in-a-lifetime auction event will be staged in the palace’s elegant formal gardens, providing both telephone and absentee bids and foregoing the traditional live audience. Celebrated auctioneer Charlie Ross, who brings his charismatic British charm to every Gooding & Company live auction event, will be commanding the auction stage. These 15 extraordinary cars hail from one of the world's most revered private collections and represent the culmination of decades of research and dedication. The collector's meticulous passion for the very finest brings together the most coveted and valuable examples of European sports and racing automobiles of the 20th century