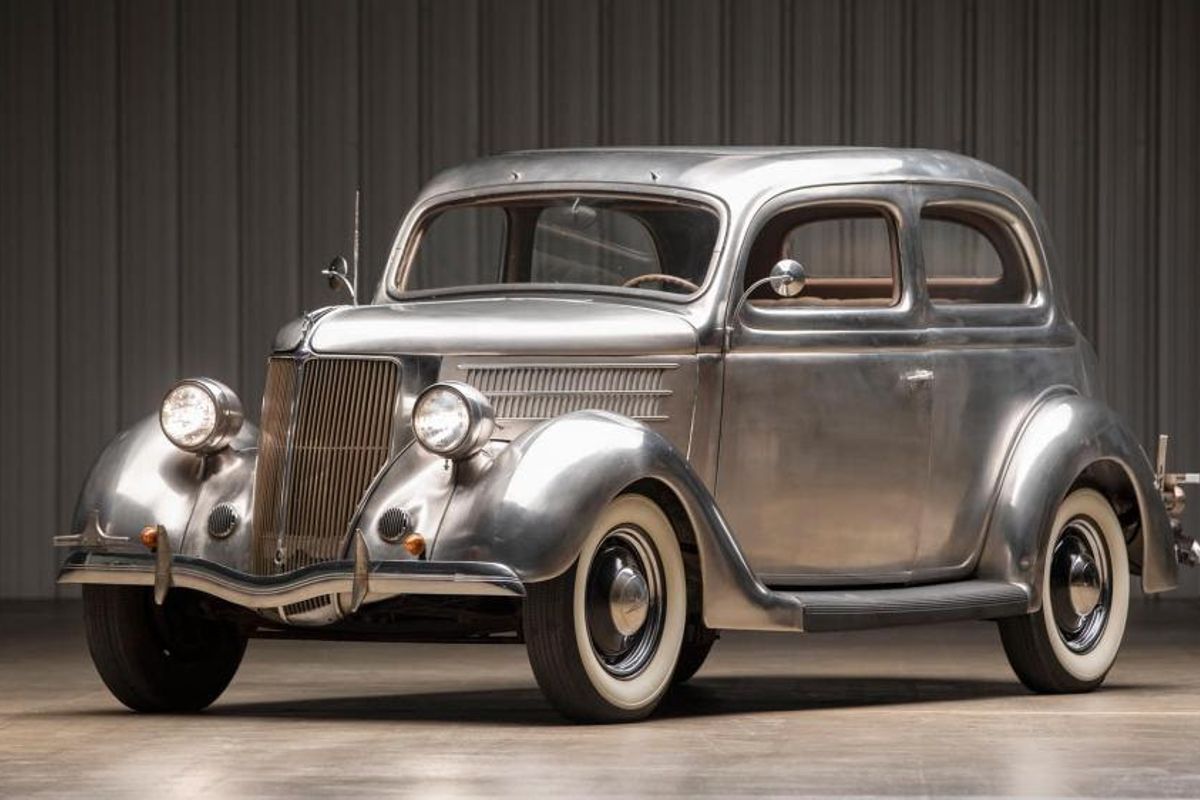 CHASSIS NO: 3222132
• One of only six stainless steel examples built in collaboration with Ford Motor Company
• Striking technology demonstrator of stainless steel's durability and versatility
• Reacquired and restored by Allegheny Ludlum in the mid-1950s
• One of just four examples known to remain in existence today

Following on the successful construction and extensive use of the first three stainless steel-bodied Ford Model A cars produced in 1931, Allegheny Ludlum Steel Corp. (formerly Allegheny Metal Co.) commissioned a new six-car run of 1936 Ford sedans in direct collaboration with Ford Motor Company in 1935. As before, all were used extensively throughout the United States to introduce the amazing new “Allegheny Metal” to the public. As intended, they remained in faithful service with the company and subsequent private owners long after most regular steel-bodied cars had already been retired, often outliving their rugged original Ford mechanical components. During their lifetimes, these beautiful technology demonstrators handily confirmed the advantages of their innovative, rust-free body construction and publicly promoted the cutting-edge technological capabilities of Allegheny Ludlum everywhere they were driven and enthusiastically displayed.

Once completed, the gleaming vehicles were driven from Detroit to Allegheny-Ludlum’s main plant and offices in Brackenridge, Pennsylvania. From there, company representatives drove them to each of the company’s district offices in Chicago, New York, Cleveland, St. Louis, Philadelphia, and Detroit. While in service with Allegheny Ludlum officials and sales representatives, the stainless cars provided instant recognition and demonstrated the startling durability and compelling use cases for the company’s steel products. Often, the cars were followed closely by curious onlookers in traffic. According to company literature and numerous magazine articles, these six stainless cars served Allegheny Ludlum faithfully and accumulated some 200,000 miles each until 1946-47, when they were sold to company employees who continued to use them. Four are known to remain in existence today, with the cars assigned to the Cleveland and St. Louis branch offices believed lost.

Provenance of the wonderful stainless-bodied 1936 Ford Tudor DeLuxe Touring Sedan offered here as part of The Historic Stainless Steel Trifecta, is simply impeccable. According to an engaging booklet first produced during the 1960s and republished in the 1990s by Allegheny Ludlum Steel Division of Allegheny Ludlum Corporation, entitled “Stainless Performance,” the 1936 Ford was purchased in 1947 by Gerald Richards, a painter at the company’s main Brackenridge, Pennsylvania plant. Mr. Richards and his family toured extensively with the fascinating Ford through the early 1950s, going as far afield as the Gulf of Mexico and Canada to the north. Always, the Richards family was mobbed by folks mesmerized by its glowing, rust-free stainless steel bodywork that seemed to defy time and distance. An easily repaired scrape at a local shopping center caused little concern, reportedly polished out, while the other car’s regular steel bodywork was much worse for wear. As with the other stainless 1936 Fords, Richards’ car was cosmetically intact, yet the supporting components required restoration; accordingly, it was taken off the road by 1954.

Soon after its retirement, the venerable Ford was purchased from Mr. Richards by Mr. Ian Kiltie, an Allegheny Ludlum employee in Detroit, through whom the car was repurchased by the company and restored at the behest of company executives. The prized vehicle was eventually joined at the Allegheny Ludlum facilities by the 1960 Ford Thunderbird and 1967 Lincoln Continental Convertible Sedan which complete The Historic Stainless Steel Trifecta we are thrilled to offer at auction.