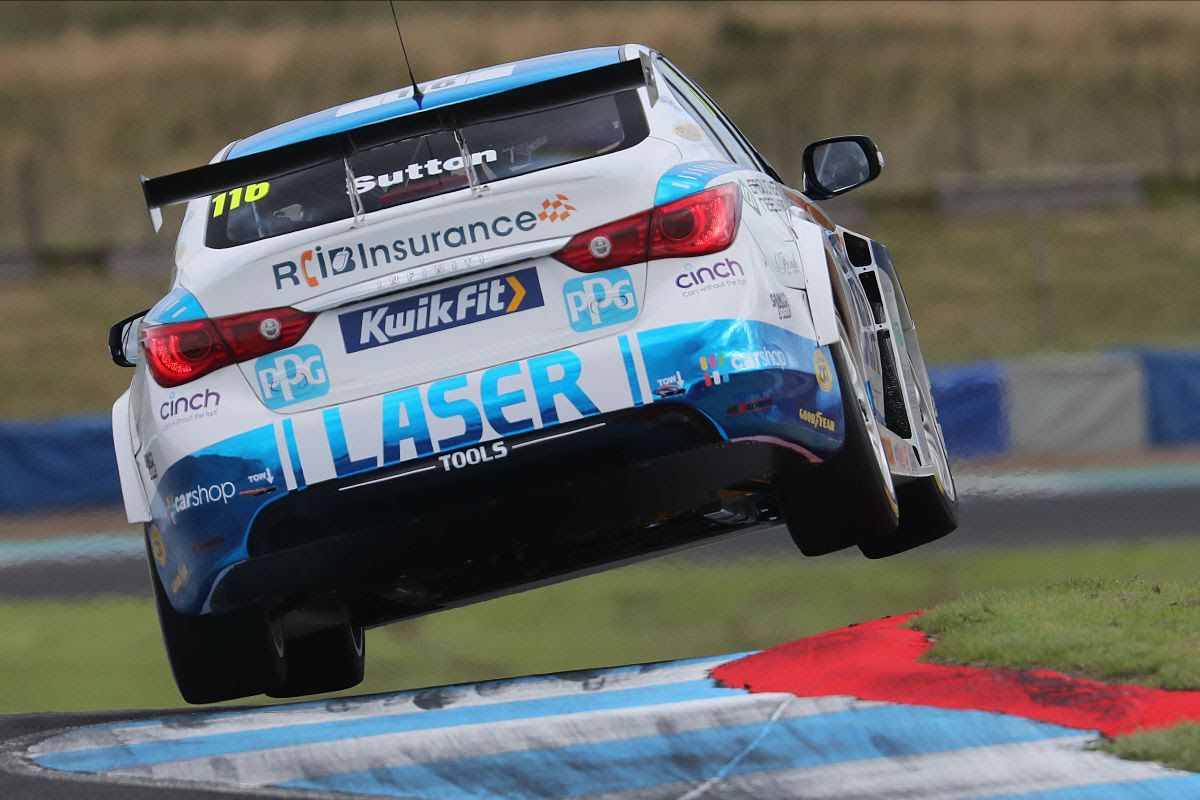 The 30-minutes of running was interrupted following a hefty shunt for Matt Neal, and although there were several improvements up and down the order following the restart, nobody could match Sutton’s earlier 50.535s lap time.

Toyota Gazoo Racing UK with Ginsters’ Tom Ingram was the first man to set a representative time and he immediately followed that with a heart-in-mouth moment on his next tour. The Toyota Corolla twitched on the exit of the chicane, ran wide on the left, before being spat across the track towards the barrier. Ingram did well to save the car from contact, but he couldn’t maintain his place at the top of the order.

Sutton then recorded two laps quicker than his rivals – suggesting that he could have consistently run at the same pace – to take the first ever BTCC pole position for the Infiniti.

Championship leader Colin Turkington importantly managed to sneak his maximum ballast-laden BMW 3 Series into second with just seven minutes remaining, and it came at an absolutely critical time in the contest as Halfords Yuasa Racing’s Neal was almost simultaneously having his session-ending accident.

Like Ingram before him, Neal’s Honda Civic Type R ran wide through the chicane, but the pace was too fast as the car was launched back across the circuit and into the barrier at relatively high speed. A damaged Honda and slightly damaged pride for Neal, but the three-time BTCC champion will back in the thick of the action come race day.

Interestingly, team-mate Dan Cammish decided not to rejoin the session following the restart – potentially choosing to save tyres for tomorrow’s critical triple-header – but he was immediately relegated one place down the order as MB Motorsport accelerated by Blue Square’s Jake Hill launched into second, securing his first-ever front-row starting berth in the BTCC.

Turkington held on to third until the finish, whilst Cammish and Ingram eventually had to settle for fourth and fifth on the grid for tomorrow’s opener.

Rory Butcher ensured the predicted quintet of title contenders were inside the top six as the Scotsman produced the goods at his home track.

Mike Bushell performed well in the Power Maxed Car Care Racing Vauxhall Astra as he took seventh, whilst Laser Tools Racing’s Aiden Moffat left it late to grab eighth. It has been Moffat’s most competitive day of the season so far – importantly coming at both his and the team’s local track – and the Infiniti Q50 could prove a potent weapon around the 1.27-mile circuit tomorrow.

Neal – who had looked extremely racy in the early stages – ended up ninth despite his accident, whilst Team BMW’s Tom Oliphant rounded out the top ten.

The pace during the session proved relentless with 24 cars being separated by less than a second, suggesting we should be in for a thriller in Fife on Sunday.

Ash Sutton said: “We’ve needed that. It’s great to get the first Infiniti Q50 pole position, that’s another thing ticked off. But it wasn’t easy! Obviously the past couple of weekends we’ve suffered with pace in qualifying due to issues in Free Practice, but it was nice to have a free day today.

“We put a fresher set of tyres on in FP2, like everyone else, so we got a bit more of an indication of where we were at. But that was the first time on a new tyre and the car was absolutely spot on. BMR Engineering and Laser Tools Racing have done a sterling job with it! I couldn’t have asked for a better car.

“Obviously it’s mega important to claim that little point to claw back on Colin for pole. The plan is to try and outscore him from that point onwards and this is our perfect opportunity. We’ve not been in this position yet this year so it’s our prime time to try and do something about that points gap between us.”

Jake Hill said: “Amazing, I’m chuffed to bits. It’s great for me and for MB Motorsport accelerated by Blue Square. We’ve all done a great job today and it showed; in FP1 we were feeling good pace-wise, in FP2 we just did a race run and then obviously we’ve committed to a certain route for qualifying and it paid off.

“I was a bit dubious at first, and then we came in after our first run and had another misfire issue so we had to replace a part of the engine, wiring basically, during the session and then we went out and managed to secure that in the last minutes.

“It definitely wasn’t easy, I was pushing the old girl to her absolute limits. I’m just happy that we managed to stick it right up at the front, it’s my first-ever front-row start in terms of qualifying pace which is absolutely fantastic. It was just nice to be able to pull a lap together. I knew it was in me. We thought maybe a 50.7s was on the cards, but to grab a 50.588s was fantastic, I’m chuffed to bits.”

Colin Turkington said: “I’m really happy with the result. Knockhill qualifying, you always have to produce your biggest lap of the season, so I managed to do that and pull one out of the bag.

“As a car, as a team, we’ve steadily improved throughout the day and I had my best car in qualifying. There were many laps through turn one I was thinking ‘where did the road go?’ I was so far up on two wheels. But you have to really attack this circuit, which I think is why we all really love it.

“One of the biggest difficulties of Knockhill is trying to get some clear space, but also have yourself in a rhythm. You really have to attack turn one and the chicane, so you can’t have too many other people around you. You just need vision: you need a clear track to go on the attack. Thankfully I had that in the middle run. I couldn’t get space on my final run but I had a good time in the bank, so we’re well set up for tomorrow.”

Rounds 10, 11 and 12 of the 2020 Kwik Fit British Touring Car Championship take place at Knockhill tomorrow (30 August) with all the action being broadcast live on ITV2 from 1040.