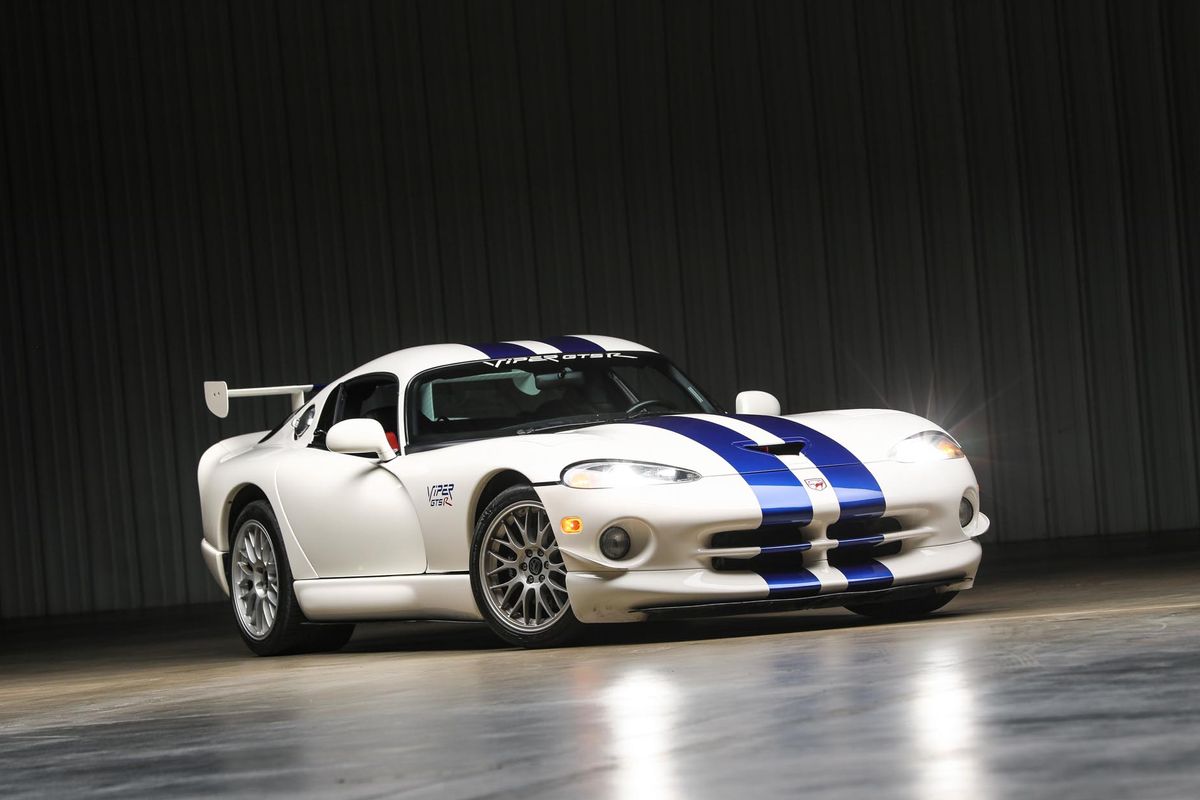 Vehicle Description
Looking to produce an all-new modern-day Cobra, the Chrysler Corporation gave birth to a concept car named the "Dodge Viper" in the year 1988. With lots of positive feedback from the showing, it made its public debut for sale in 1992. The long, low, and sleek Viper was a car like none other on the market and, if the looks weren’t enough, a powerful V-10 was equipped to show the world they meant business. With the major success of sales and excitement in the U.S. market, Dodge decided to take their success to the international race scene.

Teaming up with the French ORECA racing team in 1997 in an effort to try to win the FIA World Championship, Dodge knew they had to revamp the already sleek Viper. The outcome was an all-new GTS-R Viper race car that threw down a vicious 700 horsepower on the racetrack. With the all-new design and engine upgrade, team ORECA and Viper took the racing world by storm, racking up an incredible five FIA World Championship titles from 1997 to 2002. During that unstoppable period of time, the GTS-R also finished first in class at the 1998 world-renowned 24 Hours of Le Mans race and positioned itself in the history books as only the second production-based American car to ever win the race, and shares the same title as the famous Ford GT40 that won it in 1966. Dodge decided after that first FIA World Championship win in 1997 to create a limited production GTS-R street version for public sale to pay homage to the Viper and ORECA race team. With only 100 being produced for the 1998 market, many experts regard the GTS-R Viper as one of the rarest and wickedest snakes to come across.

Presented here in all its glory is production number 2 of 100, as evidenced by the factory issued dash plaque. A low mileage American super car, it comes with a fire-breathing 8.0L V-10 that puts out a hammering 460 horsepower and 500 pounds of tire melting torque. Mated to the engine is a smooth shifting six-speed manual transmission that enhances the race car-like driving experience. The sharp yet striking curves throughout the car combine with the stone white and Viper blue stripes to create the appearance as if the car was produced in today’s modern American super car era, instead of the ‘90s. Adding to the rarity and aggressiveness of the car, it is equipped with the optional $15,000 GT2 Champion Edition package. Key components of the added package are the multiple ground effects, including the front air dam with splitter, front nose with aero plates, side sills, and the winged rear.

This limited number car is also identified by the GT2 Champion Edition badges and graphics that include "Viper GTS-R" on each side of the hood, as well as on the windshield. In addition to that, an American flag with "FIA Champion" is on each quarter panel. Inside the venomous cockpit is two-tone blue and black leather upholstery. Two impressive features to the interior is the production number 002 serialized dash plaque and the red ORECA logo 5-point racing harness, which is the same harness system that the 1997 Viper used while winning its first of many FIA world titles. In the trunk of the car, the spare tire case is signed by the entire Viper engineering team. This rare feature is a true testament to the car itself, as they knew how truly special it was before it even left the factory for public sale. Also accompanying the car is the factory issued numbered car cover with bag, original window sticker verifying the GT2 Champion Edition Package, original watercolor pictures of the car being built, and the unopened owner driver’s manual.

GTS-R 002 was sought-after and acquired by the second and current important southwest collector/owner in 2006. He knew exactly what he was looking for - fast, important as #002 and fully documented. He also was focused on a no-hit/no-paint example. The accompanying AutoCheck report verifies this with the seller indicating that only the side sills were repainted as a result of the virtually universal yellowing due to heat that these cars are known for. Getting behind the wheel and taking off allow the driver to quickly realize how these cars won world championships, as they provide a beyond exhilarating experience. Exceptional stewardship has been given to the car; however, it has been regularly exercised and enjoyed with the owner covering around 5,000 miles during his tenure and the odometer now showing just 7,140 miles.

The GTS-R should be at the top of American supercar collectors list and #002 stands apart from the short run as a highly documented, low mileage and cared for example presented in its historic red accent, white, and blue winning theme. This GTS-R Viper is guaranteed to leave a long-lasting venomous bite on anyone it comes in contact with.