September 4, 2020 in Historic and Market 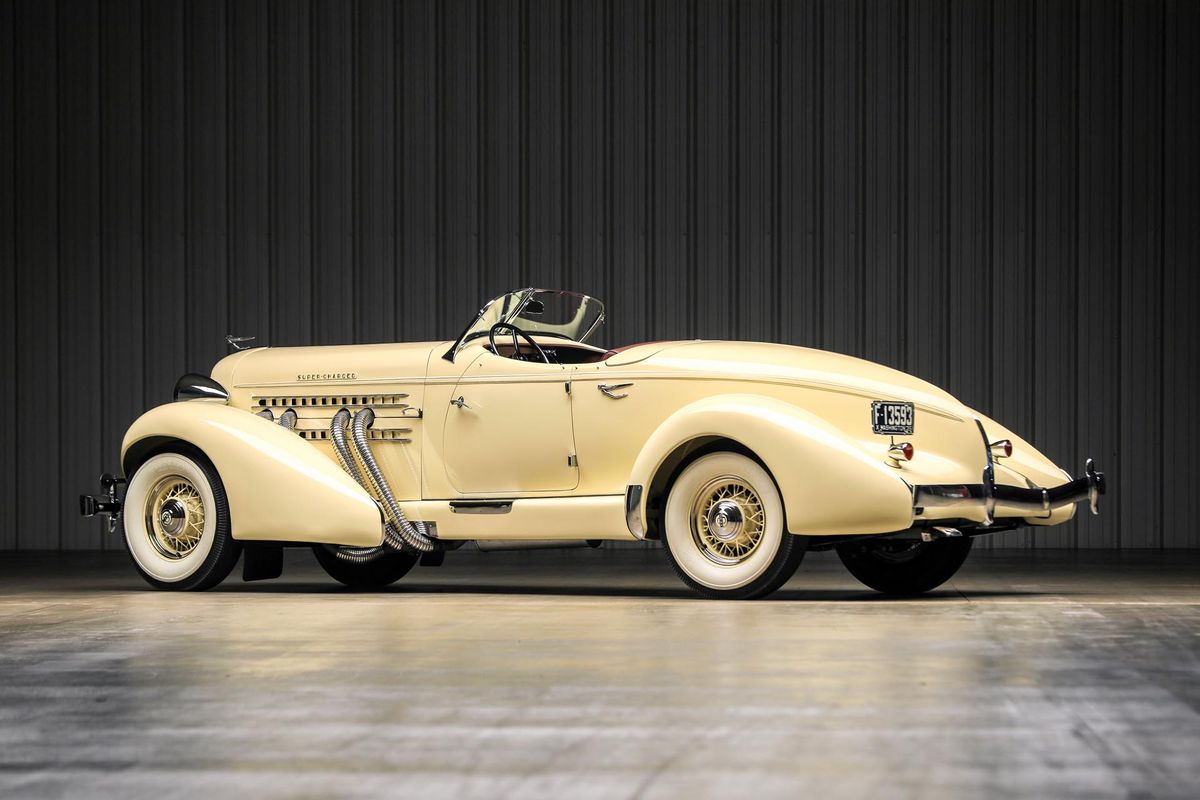 Vehicle Description
The Auburn 851 SC Boattail Speedster is among the most visually striking pre-WWII automobiles ever produced. The voluptuous pontoon fendered front end and imposing grill magnificently flows rearward to the raked V windshield ultimately sharpening into a fierce boattail derriere. This stunning design gives the impression of motion while still and is the epitome of Art Deco design. The Speedster is a snapshot back in time and captures the end of the Gilded Age at its peak. The lasting effects of the Great Depression inevitably took its toll on the innovative automaker, which had only recently been rejuvenated by the Auburn Automobile Company and their boy wonder designer, Gordon Buehrig, hence the 851 Boattail was essentially the swansong for Auburn. Although history remembers the Boattail as one of Buehrig’s greatest achievements, the production numbers were fairly small with only approximately 150 examples built. What this equates to today is an incredibly rare and highly sought-after automobile from a time when more was more. Very few of these magnificent automobiles remain which makes the unicorn example we have on offer, here in the city of its birth, all the more remarkable and uncommon.

Equipped with a flathead inline eight-cylinder Lycoming Supercharged engine, the 851 SC Speedster was celebrated for its ability to maintain a speed of 100 miles per hour, which was quite a feat in its day. In fact, every Supercharged Boattail manufactured was tested and guaranteed to hit at least 100 miles per hour; the Speedsters were tested and signed off at 100.1 mph by historic race car driver, Ab Jenkins as evidenced by the plaque prominently displayed on the dash. The Lycoming Supercharged powerplant was mated to a three-speed syncromesh transmission which delivers power to the Columbia two-speed rear end. The road surface was tamed by suspension consisting of non-independent, semi-elliptic leaf springs and hydraulic dampers front and back while the rear suspension offered a dual live axle. Incredibly, this example still retains the car’s original Columbia two-speed live axle. With 150 horsepower at 4000 rpms, its performance knew few rivals in its day, but it was the extraordinary and flamboyant styling that really thrusts this car into the brass ring of pre-WWII American automobiles.

This exceptionally proper 1935 Auburn 851 SC Boattail Speedster is accompanied with two ACD (Auburn-Cord-Duesenberg) Club Verification of Origins Certificates and is acknowledged via board, bylaws, and review to be an original Category 1 automobile, which means it retains all original components. The history of the car reputedly began as one of a rare handful of exports to Europe. It was ordered from the factory by Allen Francis Pegler of Nottinghamshire, England. It then went to Colonel Collins in 1957, also of England, for a brief time. The car finally made its journey back to our shores in 1960 when Major Russell Hopf brought it home after serving abroad. The Hopf family retained the car until 1981, selling it to Don Criteser of Portland, Oregon. It further passed through Washington residents Stu "Lefty" McLeod and Wayne Herstad before ending up with John Dennis of Mukilteo, Washington. Mr. Dennis restored the car and took it back to its glory before it was recertified by the ACD Club in 2000. Included in the file is a letter from Mrs. Dennis expressing her gratitude to the current owner that their treasured Auburn had found a great new home.

The striking body of the car is dressed in an elegant Cigarette Cream, which is offset by a deep dark rich maroon leather interior, tan cloth convertible top, chromed tailpipes, brilliant brightwork and the iconic flying lady hood ornament. As this car was built to perform, a tachometer is prominently displayed in the cluster as well as a clock and a radio with the correct antenna discreetly hidden under the right-hand runningboard. Thanks to its high performance specifications and period tested speeds of more than 100 mph, it would be a pleasure to take on Classic Car Club Caravans as well as participate in the Auburn-Cord-Duesenberg Club’s many activities while its timeless styling would assure it a warm welcome at enthusiast shows, concours and tours throughout North America.

One thing is certain; an original 1935 Auburn 851 SC Boattail Speedster, being one of the greatest designs of the classic car era, with not one but two ACD Club Certifications is not only deemed highly desirable, it is simply unmatched.