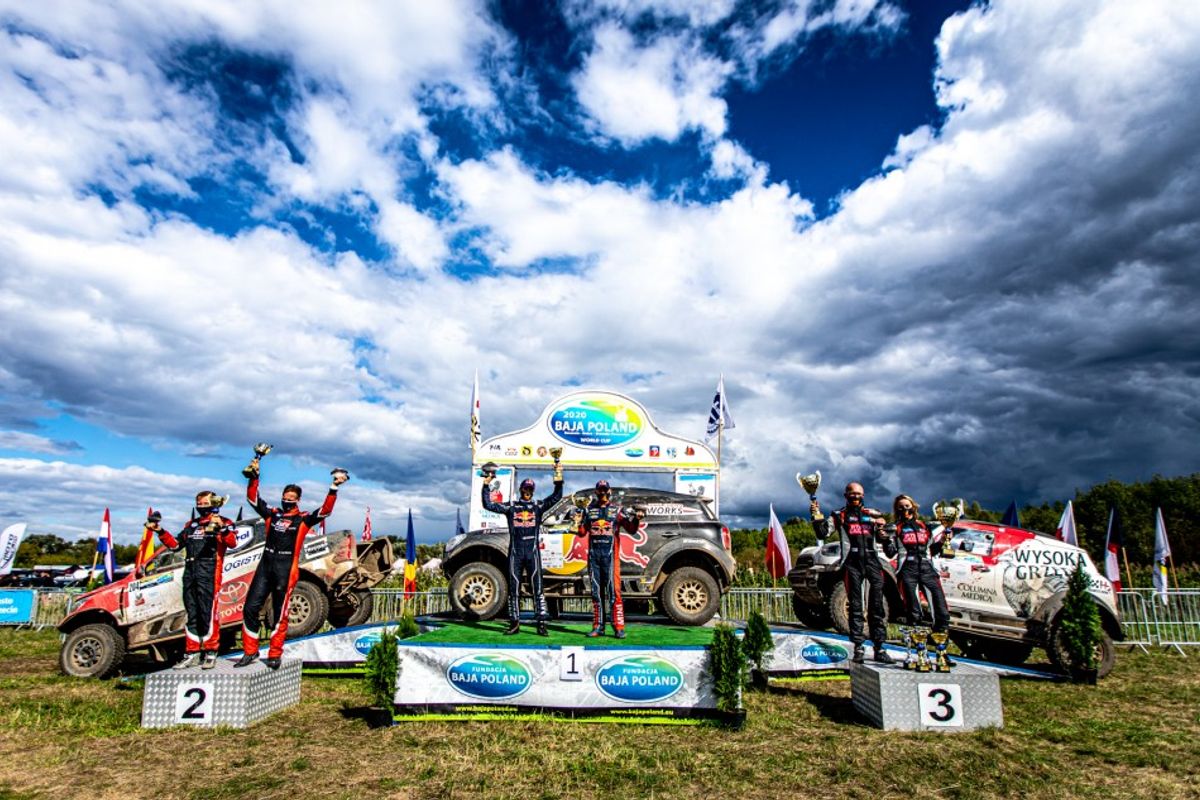 In their first cross country event together, Stéphane Peterhansel and Edouard Boulanger powered to victory on Baja Poland, the second round of the FIA World Cup for Cross Country Bajas. The all-French pairing survived the rain-drenched event to clinch a third consecutive win for the MINI on a rally where survival proved to be the name of the game. Bernhard Ten Brinke and Tom Colsoul brought their Toyota Hilux Overdrive home in second position with the Polish crew of Michal and Julita Małuszyński, in another MINI, taking the final podium position.

Contested over seven selective sections in the Szczecin, Drawsko Pomorskie and Dobra municipalities, this year’s 12th Baja Poland proved to be one of the most challenging in history, with persistent rain creating treacherously slippery and muddy tracks. Peterhansel and Boulanger went into the event focused on building their new relationship and, in an older specification car, were aiming for a solid finish over terrain Peterhansel had little experience of. The twice-repeated 172 kilometre section on the military training ground in Drawsko Pomorskie on Saturday proved to be the decisive stages and, as their rivals hit problems, the duo claimed their first and only stage win in the second of the sections to power into the lead, despite some engine and gearbox problems. With just over 14 minutes in hand going into today’s shorter sprint stages, Peterhansel and Boulanger were able to control their pace to the finish and claim their first win on Baja Poland by 12 minutes and 48 seconds.

Ten Brinke had a former Baja Poland winning co-driver in Colsoul alongside him, but the Toyota crew also had a challenging time in the military stages. Thirty kilometres into the first run the window heater broke and the crew was forced to keep stopping to clear the windscreen. After repairs in service they were able to restart, but charging problems then meant they had to stop again as they battled with a lack of electrical devices.

The Małuszyński pairing, in the MINI John Cooper Works Rally, had a very strong run on their home event, consistently within the top five in all but one of the sections to finish third overall. However, broken windscreen washers kept forcing them to drive through water splashes to clean the screen, and a loss of power due to an overheating engine also dropped them time.

Three of the hot favourites for victory struck problems on their return to competition. Nasser Al Attiyah and Mathieu Baumel, who have won the event twice, were second fastest through the first of the long stages despite also suffering from a misted windscreen. However, blocked filters and water intake then presented the threat of a serious engine failure and the crew retired in the following stage. Jakub Przygoński and Timo Gottschalk were challenging hard yesterday, but the Polish driver - a former winner of the event - dropped nearly 50 minutes in SS3 when he took a wheel off the Toyota. They did however manage to restart the final day of competition and claimed two of the four stage wins to finish fifth overall.

Local favourite Krzysztof Hołowczyc, a six-time winner on home soil, took the early lead on Saturday, but the Pole and co-driver Łukasz Kurzeja retired from the day’s competition with technical problems. They were however back in action today and racked up two stage wins on their way to seventh. The Ford Raptor crew of Martin Prokop and Viktor Chytka fought back from water intake and a flooded engine to finish one place further behind.

Fourth overall and first in T4 were Aron Domzała and Szymon Gospodarczyk, the Poles leading the category from the second section after winning all but the Qualifying Stage on Friday in their Can-Am X3. The T3 win was claimed by Vasily Gryazin and Oleg Uperenko, the Russian/Latvian pairing taking a clean sweep of stage wins to lead from start to finish.

The third round of the FIA World Cup for Cross Country Bajas takes place in Portugal (05-11 November).