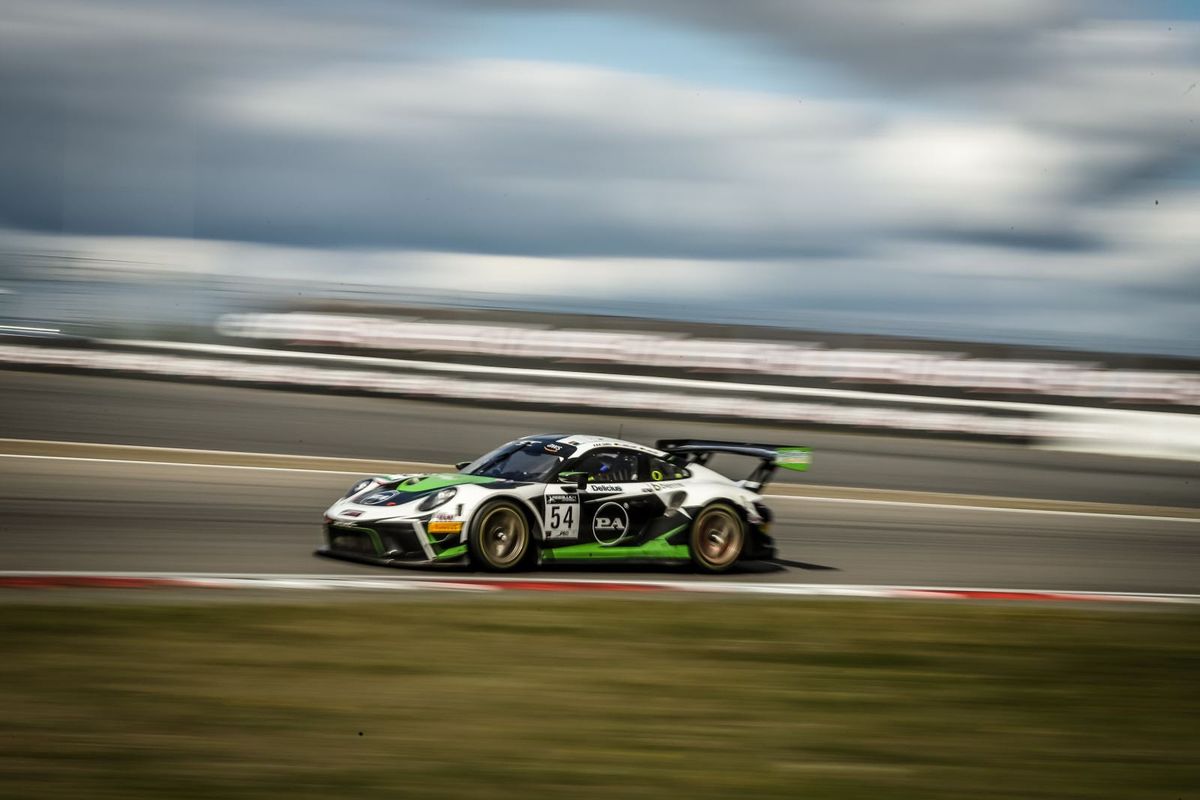 Dinamic Motorsport took a resounding win in today's GT World Challenge Europe Powered by AWS race at the Nürburgring to give Porsche an immensely satisfying victory on home soil.

The six-hour Endurance Cup contest featured a wealth of wheel-to-wheel action, though the #54 Dinamic car was rarely involved. Christian Engelhart, Sven Müller and Matteo Cairoli had the pace and the composure to stay out of trouble from start to finish, pulling away from the pack to win by a little under 15 seconds.

The race began in dramatic fashion when several cars made contact at turn one. The incident left a number of potential winners out of contention, including the pole-sitting #40 GPX Racing Porsche and the fast-starting #163 Emil Frey Racing Lamborghini.

The safety car was deployed, after which the Dinamic Porsche quickly built a gap with Engelhart at the wheel. The team elected to change drivers for each stint and with all three equally comfortable at the head of the pack the car ran metronomically.

They surrendered the lead briefly after pitting during a mid-race safety car period, which dropped Engelhart behind the #88 AKKA ASP Mercedes-AMG of Timur Boguslavskiy. But any concerns in the Dinamic garage were quickly dispelled as Engelhart launched an attack at the restart, driving around the outside of the Mercedes at turn two and retaking the lead.

Another safety car period looked to have put Müller under pressure during the fifth hour, when the #32 Belgian Audi Club Team WRT car of Dries Vanthoor was able to close up on the Porsche. This looked set to develop into a close battle until the Audi was handed a drive-through penalty for an earlier unsafe release, giving Müller considerable breathing space at the head of the field.

The German driver crossed the line with a comfortable advantage to secure Dinamic its second Endurance Cup win following last year’s famous debut triumph at Monza, while Porsche took its fifth victory in the series. Engelhart clinched his fourth Endurance Cup win, while both Cairoli and Müller triumphed for the first time.

The #88 AKKA ASP Mercedes-AMG of Boguslavskiy, Felipe Fraga and Raffaele Marciello finished second after an eventful race. The car started 13th but was third following the early safety car, Fraga having made excellent work of the incident packed opening lap. The Brazilian driver climbed to second during the first hour but could do nothing about the rapid Engelhart.

The car led briefly with Boguslavskiy during the fourth stint, after which the Russian was at the centre of a multi-car tussle that also included the #25 Sainteloc Racing Audi of Dorian Boccolacci. He handed over to Marciello for the final two hours, but the Mercedes factory star could not match Müller's pace in the leading Porsche.

Indeed, Marciello spent the closing stages watching his mirrors as first the #63 Orange1 FFF Racing Lamborghini and then the #4 HRT Mercedes-AMG pushed the Italian hard for second spot. Maro Engel was at the wheel of the HRT machine for the final stint after Vincent Abril and Luca Stolz had tackled the opening phase of the race.

Marciello eventually pulled away to clinch second, while Engel was dealing with a recovering Vanthoor. The youngster was the class of the field during the final hour, scything through the pack and closing on to the rear of the #4 Mercedes. Despite his best efforts Vanthoor could not quite overhaul the HRT car and also dropped behind the sister #31 Belgian Audi Team WRT entry of Mirko Bortolotti on the final lap.

HRT therefore secured a maiden series podium, while the WRT duo completed the overall top five. K-PAX Racing took its first points finish, the American squad's #9 Bentley finishing sixth after a frantic final stint, followed by the #25 Sainteloc Audi and the #100 GetSpeed Performance Mercedes-AMG. A pair of Porsches rounded out the top-10 and capped a superb weekend for the brand, with the #98 ROWE Racing crew finishing ahead of the #21 KCMG entry.

Silver Cup honours went down to the final corner as the #159 Garage 59 Aston Martin of Andrew Watson, Valentin Hasse-Clot and James Pull narrowly beat the #78 Barwell Motorsport Lamborghini. Both had run at the front of the class order from the start and were locked in battle until the very last lap. Pull was at the wheel for the finish, beating Patrick Kujala across the line by just 0.242s after six hours of racing.

The Pro-Am result was settled a little sooner, though there was just 25 minutes to run when the #19 Orange1 FFF Racing Lamborghini overtook the #991 Herberth Motorsport Porsche. Phil Keen was at the wheel for the winning pass, while the car had been challenging at the front of its category throughout the race with Hiroshi Hamaguchi and Elia Erhart.

The Herberth entry made an extra stop late on and was 44 seconds behind at the finish, closely followed by the #87 AKKA ASP Mercedes-AMG, which completed the class podium after starting from pole. The #26 Sainteloc Racing Audi ran alone for Am Cup honours and went the distance, finishing 36th overall with Michael Blanchemain, Clement Seyler and Pierre-Yves Paque at the wheel.

The Dinamic crew's win vaults them to the sharp end of the Endurance Cup drivers' standings. The #31 Belgian Audi Club Team WRT duo of Bortolotti and Kelvin van Der Linde retain the lead with 40 points, one clear of the #88 AKKA ASP trio of Marciello/Boguslavskiy/Fraga, while Engelhart/Müller/Cairoli now have 34 points.

Today's six-hour race represented the final Endurance Cup event before next month's Total 24 Hours of Spa (22-25 October) and showed that Porsche is in fine shape to contend for a second successive win in the Ardennes. But with three more brands in the top 10 and others showing strong pace during the Nürburgring contest, the biggest race of the season looks set to be as competitive as ever for its one-off autumn edition.

Before that the Sprint Cup campaign resumes at Magny-Cours, which stages the second event of the short-format championship next weekend (11-13 September). It comes during a busy period for GT World Challenge Europe Powered by AWS as the season builds towards the annual trip to Spa.

Christian Engelhart: "The start was the difficult part and then we lost the lead once in the middle when I was in the car. Towards the end it was quite close when Dries Vanthoor was catching us, but he got a drive-through. In the end we are really, really happy with this result and very thankful to the team because they gave us a rocket today. The car was fantastic and we made the most of it."

Sven Müller: "Our car was really a rocket. Yesterday in qualifying it was also really good, but I didn’t nail my segment. Luckily we were starting from P2 and P1 crashed, so maybe the luck was on our side. Today the car was unbeatable and so nice to drive. It was on the edge, but you need a car like this to win."

Matteo Cairoli: "We all did a great job this weekend and I think we earned this win. The strategy was really good and my teammates did a mega job, so I think we deserve to be the guys standing in the middle today."