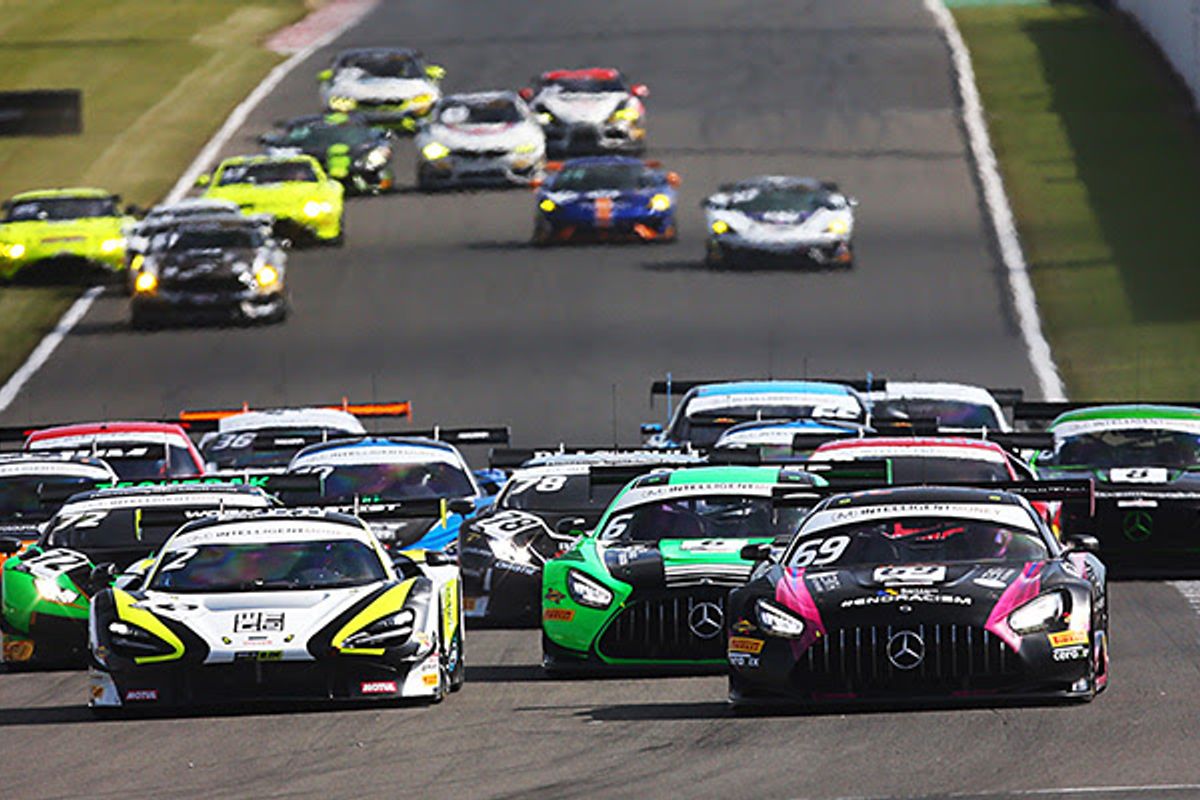 Victory puts Collard and Matthiesen back in GT4 title contention

Spinning at turn one on the opening lap is never the preferred way to win a motor race. But RAM Racing proved it was possible on a day when the Safety Car and Success Penalties, as well as the speed of Sam De Haan and Patrick Kujala, kept the #69 Mercedes-AMG in contention.

The brief caution period triggered by separate spins for De Haan and Michael Igoe also allowed Barwell Motorsport to swap Adam Balon for Phil Keen at the end of lap one, which added another intriguing strategic dimension to a three-hour encounter in which all teams had to make at least three driver changes.

Further back, De Haan was able to re-join the tail of the field thanks to the Safety Car before embarking on a stellar comeback over the first 45 minutes. Indeed, the Mercedes-AMG was already up to sixth by the time Kujala climbed aboard for the first time.

Baldwin’s pitstop had, by now, promoted Collard into P1. And, just like at Donington in August, Barwell opted to run their #78 Lamborghini as long as possible before stopping for the first time. Sandy Mitchell jumped aboard after 65 minutes but was forced to make an unscheduled stop just 20 minutes later to replace a slow puncture. The compromised strategy allied to a 20s Success Penalty served at the third and final stop effectively ended #78’s podium chances.

Instead, Barwell’s prime focus shifted to their Pro/Am entry, which – with Keen behind the wheel – took the lead once everyone else pitted for the first time. Of course, an early first pitstop also necessitated an early second, which dropped Balon back down the order until the second round of driver changes began.

Instead, Optimum’s long second stint saw Ollie Wilkinson lead most of hour two from O’Brien who could find no way past the orange McLaren. In fact, Optimum didn’t make their second pitstop until the start of the final hour when strategies began to converge.

Balon now lead but was rapidly chased down by Wilkinson’s team-mate Proctor. However, the Am driver’s stern defence was just enough to keep Barwell ahead when Keen and Wilkinson took over their respective cars one lap apart.

Ahead, RAM were the chief beneficiaries of Jenson Team Rocket RJN’s 15s Success Penalty, as well as the time spent bottled up behind the long-running Wilkinson. De Haan and Kujala were both able to take time out of the #2 McLaren before the Finn made what would be the decisive move on O’Brien at Redgate with 33 minutes remaining.

Having established an eight-second advantage, Kujala was now out of range for Keen who quickly homed in and passed silvers Jack Mitchell and O’Brien after Barwell’s final pitstop. Just 3.4s separated the top-two at the finish.

O’Brien and Baldwin made it back-to-back podiums while Mitchell and Jordan Witt benefitted from a rear suspension issue that side-lined their 2 Seas team-mates Fender and Dean Macdonald in the final hour.

Optimum’s strategy, which gambled on a late Safety Car that never came, ultimately netted Wilkinson and Proctor fifth. Behind, Mitchell and Collard slipped to second in the standings after completing the top-six.

Steller Motorsport’s Audi gave Optimum’s McLaren a hard time in the middle of the race before Sennan Fielding and Richard Williams came home seventh, one place ahead of ABBA Racing’s Richard and Sam Neary who enjoyed a solid run to eighth.

RAM’s other Mercedes-AMG shared by Ian Loggie and Yelmer Buurman ran second early on but was delayed by a spin and stop-go penalty. It came home ninth, one place ahead of WPI Motorsport’s Marco Mapelli and Igoe whose early spin was compounded by a drive-through penalty for track limits infringements.

All of that leaves De Haan and Kujala nine points clear of Mitchell and Collard but also with the caveat of serving the maximum Success Penalty in Snetterton’s first race next time out. Balon and Keen are a further 8.5 points behind with three races remaining.

Jordan Collard and Patrik Matthiesen bounced back from their tyre blowout at Brands Hatch by taking their first win of the season and climbing back into title contention.

With no pit window restrictions, GT4 featured a multitude of differing strategies, but it was HHC’s more straightforward approach that ultimately paid dividends in what was a fascinating endurance outing.

While they hadn’t topped the times in any of the previous sessions, Matthiesen and Collard had shown great pace all weekend and were already in a strong position when they qualified the car second behind Academy Motorsport’s Ford Mustang of Matt Cowley and Jordan Albert, which would have to serve an extra 20s at its final pitstop following victory last time out.

A turbulent start to the race was the first factor in creating the tactical battle. When Michael Igoe’s stranded Lamborghini summoned the Safety Car TF Sport was the first to react, immediately ordering both of its cars – started by Connor O’Brien and Dan Vaughan, respectively – to stop at the end of lap one with the race at reduced speed. TF was the only team to make that call, so the twin Astons would run out of sync with the rest of the pack for the race’s entirety.

Across the first stint nobody could touch Cowley, who picked his way through the early chaos from pole to comfortably lead Matthiesen and Gus Bowers in the sister HHC McLaren as the top three began to pull clear across the first hour.

Knowing he had the maximum Success Penalty to serve, Cowley extended his first stint as far as he could, going a full seven laps longer than Matthiesen before handing across to Albert.

Once installed, Albert kept his first run consistent and again worked his way back into the lead after the first of the early-stopping TF Astons had taken its turn out in front in the hands of Patrick Kibble.

Things soon narrowed into a three-horse race when the championship-leading HHC McLaren of Bowers and Chris Wesemael was hit with a stop-go penalty for a short pitstop, and then had that compounded by a drive-through for a pitstop infringement, which dropped it well out of the fight and to an eventual eighth.

It became a fascinating strategic battle over the final half, with the rapid pace of Albert/Cowley always threatening to pull the Mustang clear as Matthiesen/Collard played their strategy straight, stopping like clockwork almost every 45 minutes to stay within striking distance of the Ford. And then there was O’Brien/Kibble’s Aston, which rotated the lead across the pit cycles and would make its final stop inside the last half-hour.

Academy were the first of the three to make their final stop, aiming to give Albert the entire final hour to claw back the 20 seconds the car would have to lose. HHC reacted shortly after, bringing Matthiesen in for Collard knowing they could jump the Ford with no penalty to serve.

Heading into the last 45 minutes, O’Brien lead but still had to make a final stop, while Collard found himself just ahead of Albert. When O’Brien finally peeled into the pits for the last time with just 26 minutes left, it became a straight fight between the McLaren and Ford.

However, Collard drove superbly, fending off heavy pressure from Albert to eventually secure a first win of the season for the crew.

Second place was still a fine result for Cowley/Albert, who had 10s in-hand over O’Brien/Kibble.

The second Aston of Vaughan and Jamie Caroline may have adopted the same early-stopping strategy but couldn’t quite match the pace of the #95 machine. They wound up fourth – still good enough to move them level on points with the sister car at the top of the Drivers’ Championship.

Mia Flewitt and Euan Hankey celebrated another Pro-Am victory with a fine fifth ahead of James Kell and Sam Smelt in the Toyota, which had got itself into the mix for the final podium spot early on but faded back to sixth. Its cause wasn’t helped by a 30s post-race penalty in lieu of a drive-through for track limits infringements.

Jan Klingelnberg and Warren Hughes took seventh on their series debut together in Balfe’s other McLaren, finishing ahead of the penalised Bowers/Wesemael car.

Century Motorsport endured a tough race, losing the BMW of Ben Hurst/Adam Hatfield early on with a braking issue, before the second car driven by David Whitmore/Luke Sedzikowski lost time in the pits with a technical issue that left it a long way back in ninth overall.

The net result is a dead heat in the points between the two TF Astons, with Albert/Cowley just 1.5 points behind and Collard/Matthiesen a further point back.