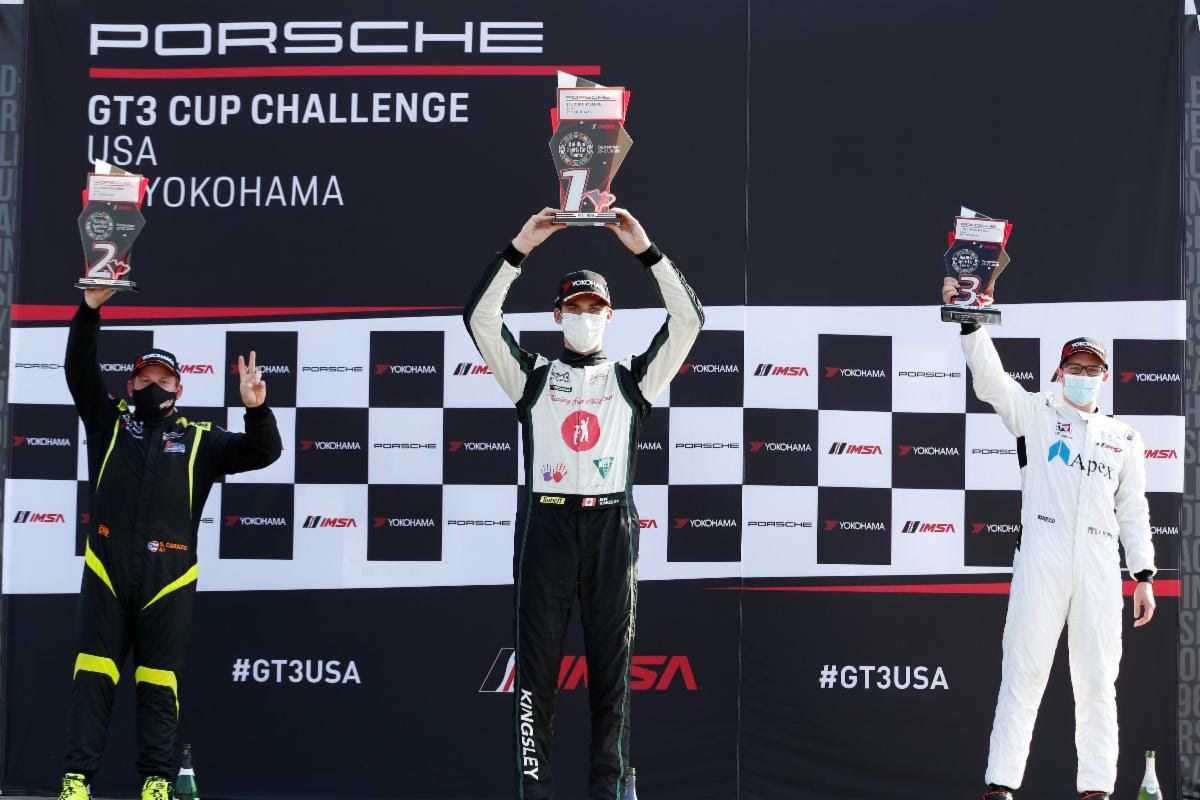 If this were an ordinary Porsche GT3 Cup Challenge USA by Yokohama weekend, Jeff Kingsley would be headed home, happy with two first-place trophies in hand after winning Race 1 and Race 2 at Mid-Ohio Sports Car Course.

However, this isn’t an ordinary weekend and Kingsley isn’t headed home. In fact, he’s got one more race in his No. 16 Kelly-Moss Road and Race Porsche 911 GT3 Cup car and an opportunity to actually sweep a GT3 Cup Challenge USA weekend for the first time in his career.

Race 2 on Saturday afternoon could not have gone better for Kingsley. He kept Riley Dickinson – who sits second in the championship standings – behind him on the start in the No. 53 Moorespeed Porsche. In fact, Dickinson and Alan Metni – third in the championship standings – battled for third place and with less than 10 minutes remaining, the two tangled and Metni was sent off track in Turn 6.

Metni was forced to pit with damage while Dickinson was handed a drive-through penalty for incident responsibility. As a result, Dickinson finished fourth and Metni seventh.

Kingsley’s Kelly-Moss teammate, Sebastian Carazo finished second in the No. 27 Porsche, while series newcomer Kenny Murillo earned his career podium finish in the No. 56 Topp Racing Porsche in third.

“It was a super good day with both wins and championship-wise as well,” said Kingsley. “It seems like we opened up a good points gap, but you can never be safe with that. You’ve got to keep pushing harder and harder and try to grow that gap. Last year this team did a great job with (2019 Platinum Class champion) Roman (De Angelis) and they had a good points year and I’m trying to do the same.

“It’s the first tripleheader that I’ve ever done, so to win three races in one weekend would be an absolute pleasure for myself and my team. Certainly, that’s the goal for tomorrow. We haven’t won back-to-back yet this year and we were able to do that today, so to go 3-for-3 would be even better. We’ll have to see what tomorrow brings.”

A further implication of the incident was the Platinum Masters result. For the first time in 2020, a competitor other than Metni stood on top the class podium for drivers 45 years and older. This time, it was Michael Mennella in the No. 4 MCR Racing Porsche. Mennella had slowly been working his way to the top step, finishing second two times and third in the last three races entering the weekend.

In the Gold Cup class for Porsches built between 2014 and 2016, Curt Swearingin carried his momentum from a victory in Race 1 to the same result in Race 2 driving the No. 17 ACI Motorsports Porsche. Having entered the weekend only two points over Efrin Castro in the No. 65 Porsche for TPC Racing, after two victories, the gap now stands at eight points following Swearingin’s success.

“We feel real good,” said Swearingin. “We gave up some points at Road Atlanta with a little mistake in Turn 3 with a Platinum car and cost ourselves a lot of points. To come back today and get six points and get us back up to an eight-point lead is really good. If we’re able to put three more in there tomorrow and give us an 11-point lead, otherwise we’ll probably lost a few points. As long as we come out of the weekend ahead on points, that’s the goal of every weekend. Just keep putting points on every weekend and then you can win the championship. You don’t have to be the fastest every day, you’ve just got to get those points.”

Despite finishing second to Swearingin, Castro took home not only the second-place trophy but also the Yokohama Hard Charger Award for gaining the most positions in class. While not the ideal day, Castro and TPC Racing are looking forward to improvement in Race 3.

“Tomorrow we’re looking to get the most performance from us out of the weekend,” said Castro. “The first two days were very tough for us. The track is completely different from last year, so it’s been very difficult for us to get up to pace, but now we are. Now we’re looking tomorrow for a good result. We’ve been working very hard and we’ve all been focused to finish strong.”

The final Porsche GT3 Cup Challenge USA by Yokohama weekend takes place on Sunday morning at 9:20 a.m. ET. The race can be streamed live on IMSA.com.